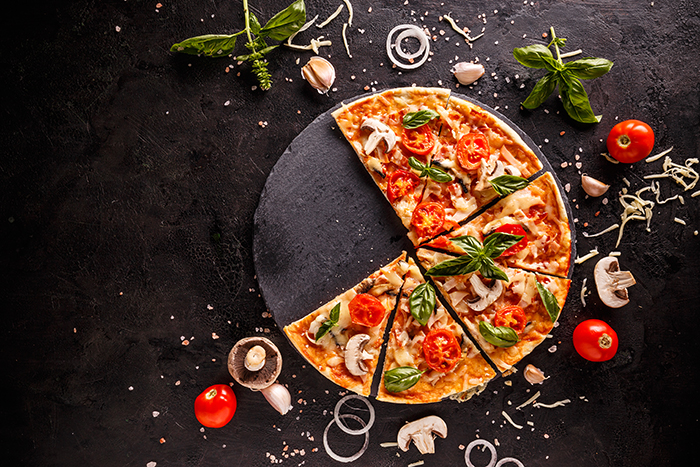 A few years back, I had the great honor of sitting in Anthony Valinoti’s kitchen for two hours doing nothing but watching him make pizza. This was before he moved into the sleek space that his landmark Hot Springs restaurant DeLuca’s Pizzeria currently occupies, in the old joint, where space and patience for fools were at a premium.

Valinoti worked smooth and fast, fashioning one gorgeous pie after another. Sauce swirled on the fresh, stretched dough like paint on a canvas. Toppings landed just so, applied in time with the Rolling Stones or Allman Brothers tunes pouring out of speakers. The pizza oven lapped up each raw pie and spit out perfect pizza with a hiss.

I remember clearly one server — a big dude with a half-sleeve tatt — swooping up an order, glancing at me and saying, “You’re brave to come into this kitchen.” 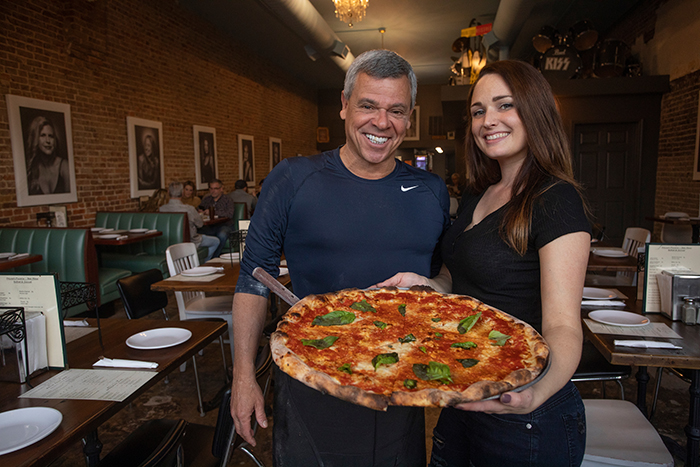 No, man; for a pizza addict like myself, that was Valhalla.

“It’s just comfort. There’s something about a slice of pizza that just makes you feel comfortable. It makes you smile,” Valinoti says. “It’s satisfying, and it’s a meal in your hand. It’s this beautiful thing that you can pick up and eat, and it’s just so wonderfully delicious. To me, that’s what it is. I love it because of that. It’s so comfortable, it really is. It makes you feel good.”

There are few single dishes in life that I love more than pizza. In fact, at this writing, I can’t think of one of them. I love it Chicago deep and New York wide; I love it Midwestern flaky and brick-oven charred. I’ll take it rustic gourmet and two-for-one chain pies — and while I know and appreciate the major differences in the two, I do not care. There are times when only water buffalo mozzarella will do and times when you just want ample leftovers for the weekend. This is America; there’s room for all.

Along the way, I have experienced things that speak to my obsession and that can only be classified as a hallmark of the truly committed. How many of you even remember the Chef Boyardee pizza kits, much less eaten something made from them? Back before you could place orders online, my wife was asked out when phoning in an order — twice — and once during a delivery. Then there was the time I opened the door to a delivery boy in tears because, as he would tell me, he was graduating college and was able to pay for that degree through delivering pizzas, thanking me for the support I’d given him. 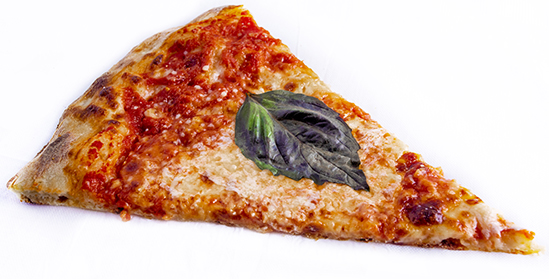 A slice of cheese from DeLuca’s Pizzeria. (David Yerby)

So yeah, you may love pizza, but until you have loved it enough that your accumulated tips to just one joint have literally put a kid through college, step down.

I asked John Iriana, owner of Little Rock institution Iriana’s Pizza, why people like me are so obsessed. What does he slip into that sauce, what’s really hidden among those toppings, to make us come back, shaky and twitchy and begging for more?

“I don’t know, but thank God though,” he laughs. “I just think it’s just such a simple combination that is so good. If you look at my prep table and all the different ingredients, boom, there’s a thousand different pizzas that I can make out of that combination. Everybody has a different idea of what they like on pizza, and you can pretty much fulfill anybody’s pizza fantasy, you know?” 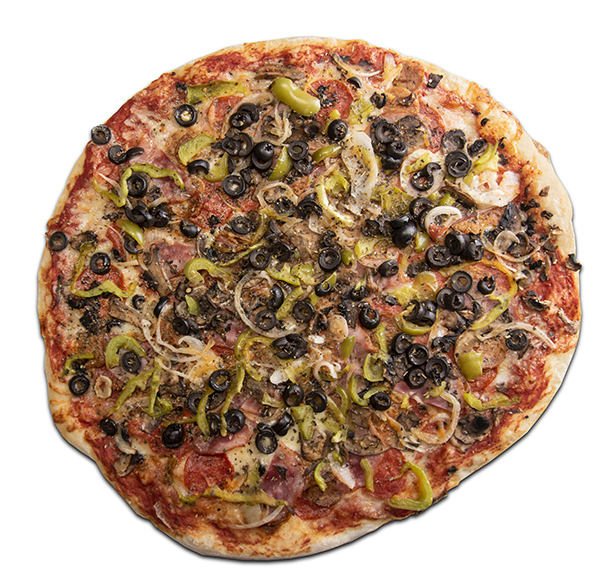 The “Clean the Floor” pie from Iriana’s. (Jamison Mosley)

Pizza originated in Naples, Italy, as working-class street food, simple starchy bites that fueled a day’s hard labor. It arrived in America with the waves of early 20th century Italian immigrants, taking root in ethnic neighborhoods of New York, New Jersey and Connecticut. The dish didn’t catch on outside of these areas until American G.I.s got a taste of the delicacy while liberating Italy. They came home, and the pizza boom began.

As pizza spread, it developed significant regional influences, not unlike barbecue, that dramatically impacted the style of pie and gave rise to a fierce war of words over which species is the best. Me? Well, as you can probably tell by now, I’m agnostic in my love for pizza and see no reason to limit myself to any one school of thought. You wanna put your foot down and swear you’ll never eat this style over that? Great, more for the rest of us.

Now, obviously, just because I love all colors and creeds of pizza pie doesn’t mean some don’t rise to the top. As my pizza-enabling wife and I often discuss mid-chew, crust is paramount to making one place favored over another. Valinoti agrees.

“The dough is what we really make our living on in a lot of ways,” he says. “Tomatoes are tomatoes; you can buy good tomatoes and make them taste good. You can buy good cheese and whatever. But really the foundation, what makes pizza sunshine on a plate, is the dough.

“Your dough has to be this consistent, beautiful thing. If you make dough well and you ferment it the right way, and it comes out the right way, now all you have to do is paint really beautiful pictures that are delicious, right?”

Iriana says the basics are so important to the finished product, he has a tried-and-true method for separating great pizza from merely average pies.

“When I arrive at a new pizza place, I will order a basic cheese pizza to see what the base of the pie is so I can really check out the crust, the cheese and the sauce,” he says. “If you have all that down, you’re going to make a good pie no matter what you put on there.

“People have different comments all the time when they walk into our place. They say, ‘Oh, it’s your crust.’ The next guy will say, ‘Oh, it’s your sauce. I can’t believe it.’ So, you don’t know what somebody is really looking at, you just try to get all the fundamentals right.”

When our four children were small, we designated Friday as “Friday Fun Night.” This generally meant watching a VHS movie from our collection and pizza. We were broke, so the fare usually came from a chain up the street, and the movies had all been watched a thousand times, but we didn’t care. Now that they are grown, memories of those nights are among the fondest I have of their tender years. And every time I order a pie, savor that pepperoni or watch that cheese bubble, I hear them laugh, see them sitting next to me on the couch or feel them on my shoulder as I carry them upstairs to bed.

That, I suppose, is why I love pizza most of all. 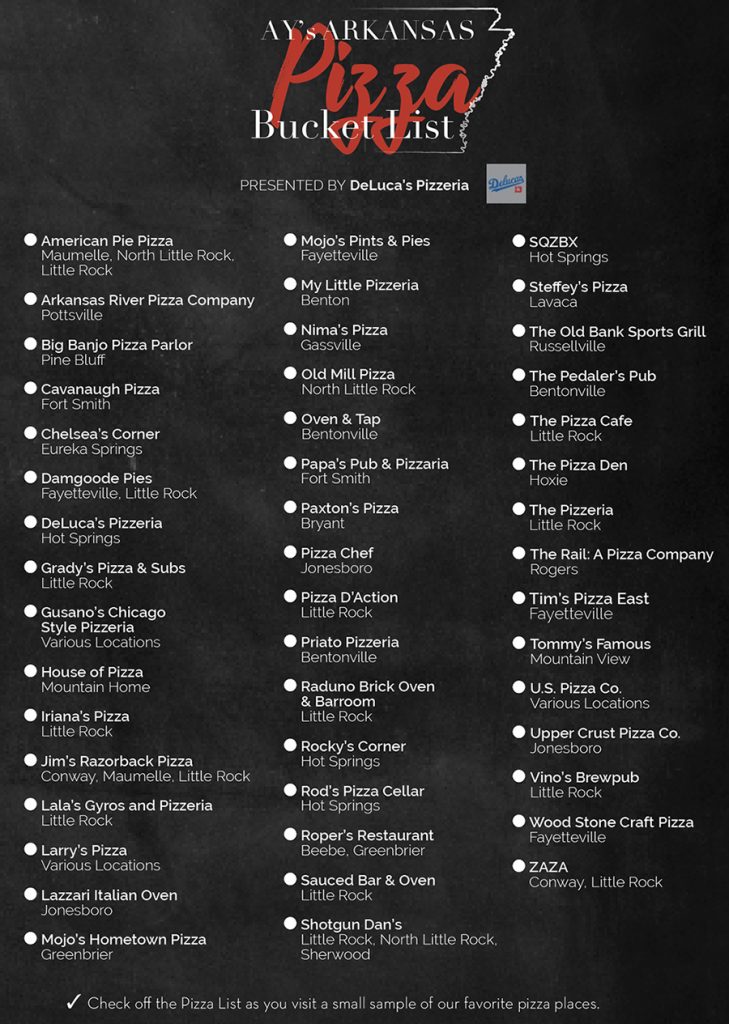