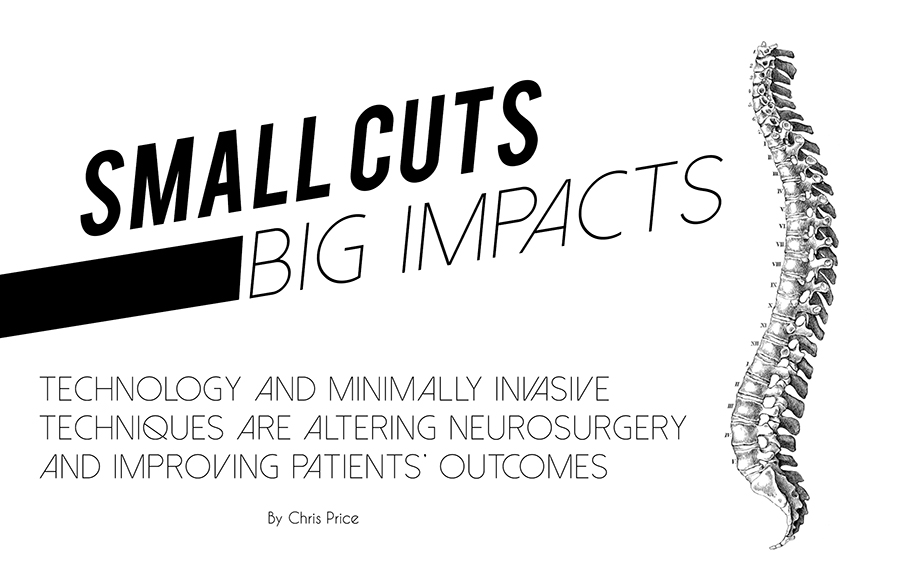 By Chris Price
Think for a minute about the leaps in cell phone technology over the past few years: better computing, better cameras and better lighting, all in smaller packaging. Those same advancements are being used in the operating room, helping spinal surgeons develop minimally invasive surgical techniques that make procedures more targeted and less traumatic, limiting patients’ time in surgery, their pain and recovery, hospital stay and medical expenses. 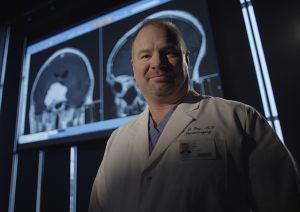 UAMS’s Dr. J.D. Day is an expert when it comes to skull-base surgeries.

“There’s been an explosion of technology over the span of my career, and a lot of what the technological advancements have done is allowed us to be much more precise,” says J.D. Day, M.D., a neurosurgeon who specializes in skull base surgery.
It used to be that spinal procedures involved large access points with lots of associated pain and potential risk. While some principles of surgery won’t ever change, medical advances in surgical instruments, interoperative computer-generated navigation tools and, soon, robotics, are changing processes, improving outcomes and benefiting patients’ recovery and financial obligations.
Day, chairman of the neurosurgery department at the University of Arkansas for Medical Sciences, says the integration of computerized image guidance has allowed surgeons to alter their preoperative planning from an inexact science of measuring points on two-dimensional X-rays and trying to establish landmarks at the surgery site. This allows surgeons to determine the incision site using real-time MRIs of the patient on the operating table to create a computer-generated, three-dimensional image that helps determine the best entry point for the procedure and then provides a laser-pointed target at the predetermined location on the patient’s body.
“Before, we had to make a big, long incision, open things up, pull muscle away from bone, take things apart and then put them back together again,” he says. “Now the incision is the size of an inch. You can do it through the skin, retracting devices open up the space and it’s like operating though a tube.”
Instruments have also been developed that allow surgeons to comfortably work in the port without their view being obstructed. Day has completed brain procedures through ports as small as 13 millimeters and back surgeries in 22-millimeter ports. 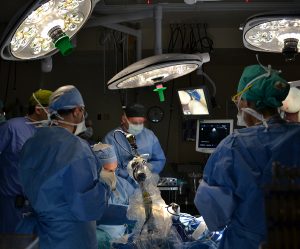 “You get a tremendous view of everything: High-definition camera technology with terrific lighting and magnification displays the site on a monitor in the operating room. That technology has developed tremendously,” says Day. “We can place screws, rods and so forth and are able to do a lot of major spinal surgery in a minimally invasive manner.
“When I started 30 years ago, if somebody had a simple lumbar disc herniation, we’d make a 4-inch incision to get it out and the patient would stay in the hospital three to five days,” he adds. “Now it’s an outpatient procedure that takes 45 minutes to an hour and the patient can go home that day.” 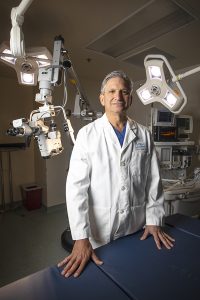 Neurosurgeon Scott Schlesinger, M.D., co-developer of the MIG-LIF micro-spine surgery procedure and founder of Legacy Spine & Neurological Specialists in Little Rock, says the medical community is trying to reduce costs and downtime for people to get back to their lives faster with as few restrictions as possible. He jokes that the only downside to minimally invasive surgery is for physicians who have to learn its techniques and methods. 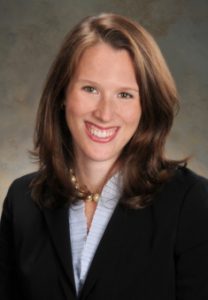 A procedure like a lumbar fusion, in which two loose vertebrae that are slipping and affecting a nerve are stabilized by joining them together with screws and a bone graft, traditionally involved a four-hour surgery with a three- to four-inch incision and one- to two-night hospital stay, says Schlesinger. Now, the procedure takes about 90 minutes and the vast majority of people are treated on an outpatient basis.
Kathryn J. McCarthy, M.D., an orthopaedic surgeon who subspecializes in treating degenerative conditions and trauma of the spine at Little Rock-based Arkansas Specialty Orthopaedics, says limiting soft-tissue damage allows surgeons to complete complex work in a much safer way.
“It’s opened several doors in terms of being able to understand and navigate a surgical site,” she says. “That’s minimized operating room time, blood loss and soft-tissue damage above the surgical site.”
Limiting collateral soft-tissue damage at and around the injury is improving patients’ recovery time and limits their pain and the chance for post-operation dangers like hospital-borne infections.
“The kinder you are to the soft tissue, the less chance you have for infection,” says McCarthy. “That’s where minimally invasive surgery has been so beneficial.”
Schlesinger says post-op infections rates are about 0.03 percent for outpatient patients compared to 5 percent for those who have to recover in the hospital.
“Post-op spinal infections are brutal and very hard to get rid of,” he says. “It’s very expensive and dangerous. About 5 to 10 percent of people who get a post-op spine infection will actually die.”
While robot assistance is growing popular in general surgery, McCarthy said it has not had a major impact on neurosurgery yet.
“We’ve been slower to approach the uses of robotics in spine surgery than other fields, but it’s coming,” she says. “Robotics are a new horizon, but I think they could have a breakthrough, especially in deformity surgery for scoliosis.”
Day says there are applications used in spinal surgery that are also used to fight cancerous tumors at the base of the skull where the brain and spinal column meet. He describes a procedure in which a physician or robot can make a quarter-inch hole in the skull and insert a laser fiber through the incision and into the tumor. With thermal energy and the assistance of a real-time MRI to provide a heat map, the surgeon uses the laser to kill the tumor.
“It’s great because you really don’t have to open up the skull like you used to. You’re not just trying to hit it with radiation. You’re actually melting it away and can see it in real time.”