Something Strange in the Neighborhood: Arkansas X Files 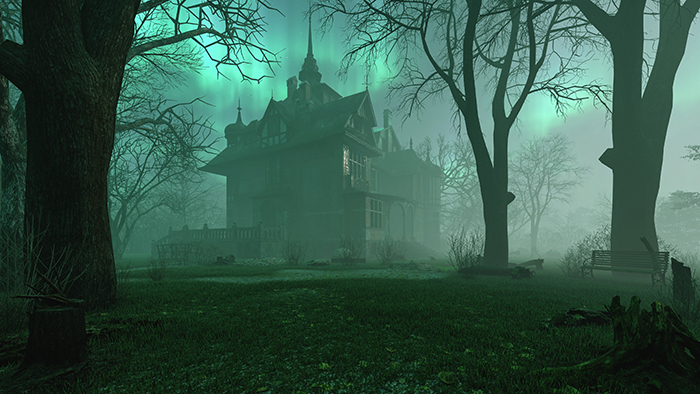 Beebe resident Tyra Clark is a believer. In a place like Arkansas, a state within the Bible Belt, half of that means exactly what one might expect: She is a woman of faith who follows the fundamentals of Christianity and the teachings of Jesus Christ. But her proud status as a believer isn’t synonymous to only the realm of theology. Clark is also a subscriber to theories — which, for her, are realities — of the paranormal nature, namely: ghosts, cryptids, extraterrestrials, and other mysterious things that might only inhabit the nightmares or television screens of most. But for Clark, finding the truth is her foremost passion. It’s why she founded the organization aptly named Arkansas X Files last year, to investigate such phenomena.

It all started in February 2020. Clark’s curiosity pushed her to attend an event called Haunted Hearts at The Fee House in Little Rock, a venue well-known for stories of spiritual dwellers. She had no formal equipment, simply utilizing a voice recording app on her phone as she traversed the shadows of the house with the other attendees. To her surprise, when she listened to the recording the next day, she realized that she had recorded an electronic voice phenomenon (EVP) — or, as she succinctly summarizes: spirit voices.

“Sometimes we aren’t necessarily able to hear with our ears, but the frequency can be captured by the voice recorders,” Clark, who is also a military veteran, explains. She says that EVPs continue to be her most commonly captured evidence today.

That was all she wrote (or spoke), as it were. Clark was hooked, and spent the next few months fertilizing her enthusiasm with experience, meeting up with other locals with similar interests — her kindred spirits. By October 2020, she was ready to blossom, creating her own paranormal team: Arkansas X Files.

“From there, I embarked on my journey, not only for the curiosity of my own but also to help others better understand and validate any unexplained occurrences or phenomena,” she says.

The name itself came about just as (super)naturally as her interest. She says she spent plenty of time researching other organizations of that ilk deciding what she would call her own, determined to come up with something that was both catchy and original. “Arkansas X Files” was, somehow, unclaimed, and she has always been a big fan of the TV series The X-Files.

It is probably a near-perfect registration, for the parallels between the show and her work go much deeper than just the name. 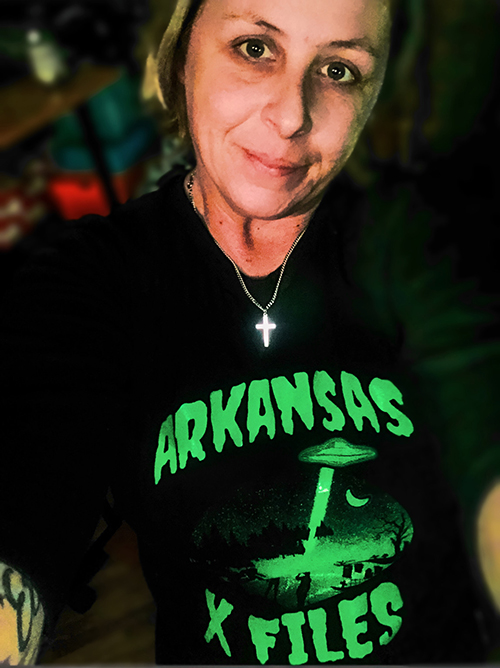 Clark prefers to not be referred to as a “ghost hunter.” The reasoning behind this is twofold. For one, popular culture has, in some ways, adulterated the moniker. Second, that’s only part of what she does. Sure, she’s spent many a night back at The Fee House, saying that she regularly communicates with the dead that many believe inhabit the home. She’s investigated haunted hotels and the legends of old bridges. But she’s just as determined to search for answers elsewhere, beyond only the ghost stories.

“We search for answers not only in hauntings but also cryptid, UFO, extraterrestrial and urban legends,” Clark says, which she’s made a pivotal part of the official Arkansas X Files mission statement.

And she and her team aren’t picky. After acquiring more and more equipment for such haunt jaunts, her work has increased in lockstep. Some of these quests are self-indulgent, traveling to a location she’s heard stories about to investigate them for herself; others are call-ins from the community, such as a local homeowner with unexplained nightly syndromes deriving from the shadows.

But before one pegs her as a “thrill-seeker” or a “con artist” (two other bynames she rejects), it should be noted that she does not accept monetary compensation for her work. She has a job, a family, as do the other members of her team. Just as investigating all things paranormal has become her passion, so too is benevolence and care for thy neighbor — again speaking to her dual belief of both God and ghost. If a residence is believed to be “haunted,” she will provide her services pro bono and investigate the situation. If it is deemed to be so, she will also perform “cleansings” upon request, to provide peace to both the living and the dead.

More often than not, she says, the former simply misunderstand the latter. From her experiences, she’s found that the presence of the paranormal does not always equal peril. Some, she believes, are just neutral occupants. Perhaps they are caught in between worlds, or have something rooting them here in ours. Most, in her mind, do not wish ill.

But there are those that do. Typically referred to as demonic, elemental, or simply “dark in nature,” these are the spirits that will get Clark’s heart rate up. If she encounters any of these, she says she will typically bring in a shaman or priest to rid the place of its presence. And she leans heavily upon her faith for courage in such instances.

She believes that she ran into a negative presence one night at The Fee House. Equipped with her cameras, equipment and recorders, she began to see and communicate with the spirits.

“That night, we had an SLS camera there, and we picked up a small figure over by the staircase,” Clark recalls. “And so I then started asking. … ‘Who is here with us?’ I got the feeling that Edward, one of the children of the Fee family, was with me. I said, ‘Edward, are you with us?’ And [I heard], in a male voice, ‘I’m behind you. I am behind you, Tyra. I am behind you.’”

Clark was there investigating a hunch, that something — or someone — was making the new owner of The Fee House sick. When she established communication with the Fees (former residents of the house who all died mysteriously in the early- to mid-1900s), she asked if such a negative presence was lurking, haunting. Their response was enough to chill even her bones.

Signs That a Presence May Be Dark or Demonic

According to Arkansas X Files 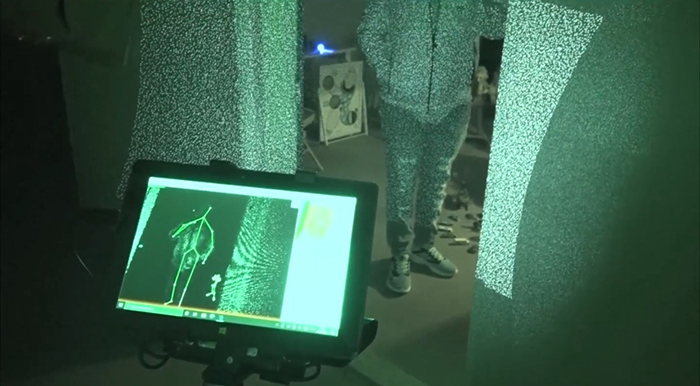 An SLS camera in action.

– Extreme sudden mood changes, such as fighting or arguing, a sudden change in character, or being withdrawn from others.

– Sudden infestation of insects, including flies or maggots.

– Reports of foul or repulsive smells.

– Dead animals appearing, such as birds.

– Hearing knocks coming in a series of three, as to mock the Holy Trinity.

Clark says that negative entities feed off of fear, and routinely prays to herself when conducting investigations.

“You shall not fear them, for it is the Lord your God who fights for you.” — Deuteronomy 3:22 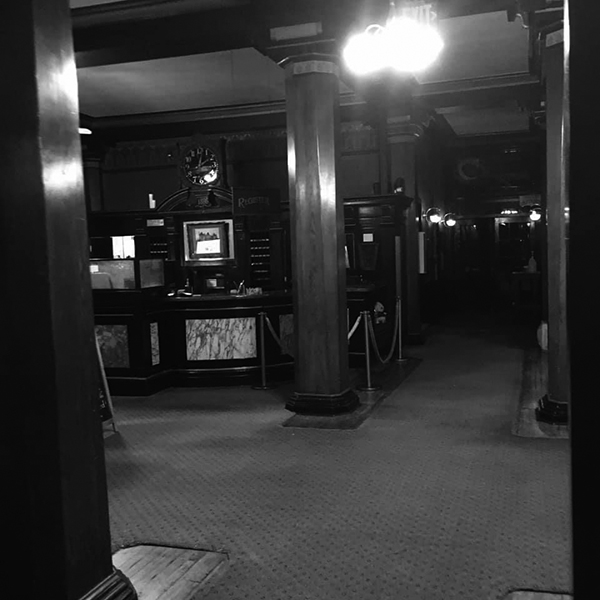 For as recently as the Arkansas X Files team has arrived on the scene, they’ve amassed quite a following and reputation. Its official Facebook page has more than 900 followers, and the group page by the same name has more than 1,100 members. Clark herself has made many connections in the paranormal world, both in Arkansas and beyond. She’s negotiated sponsorship and partnership deals, which she says has been instrumental in helping her not-for-profit cause — putting a dent in equipment costs, travel expenses and room and board. If you want to call it a hobby, that’s fine by her — but she’ll be quick to note that it’s an “expensive one.”

What began as a one-woman show now includes a team of around a half-dozen. And they’ve already made a mark on the Natural State’s unnatural side; unlike the many phenomena they examine, they are being seen. This past year, Beebe’s B2 Internet Radio did a half-hour community spotlight segment on these local ghostbusters, and Clark has also been a guest on several podcasts and digital shows, such as Grand Rapids Ghost Hunters, {shift}her and Arkie Travels. Paranormal Depot, a worldwide paranormal web directory, selected Arkansas X Files as the featured team for the state. Clark is also working toward creating more high-quality videos of her investigations, with a potential series in the works with PARAFlixx, a paranormal streaming service.

And while most of her nights to this point have been spent hunting down ghost stories, she has plenty of plans to fulfill the other parts of her mission. Like at Boggy Creek, home of the infamous Fouke Monster.

“Experiencing paranormal events throughout my life and extremely terrifying occurrences as a teenager have not only inspired my curiosity for a better understanding of the paranormal, but also my true passion to help others who are experiencing terrifying events themselves,” Clark says. “As a Christian … I truly feel led by God to help others in these times.

“The truth is out there, and we are in search of those answers.”

– The Empress of Little Rock

READ MORE: The Science of the Scare