The Southern Blonde Sets Up Shop in SoMa 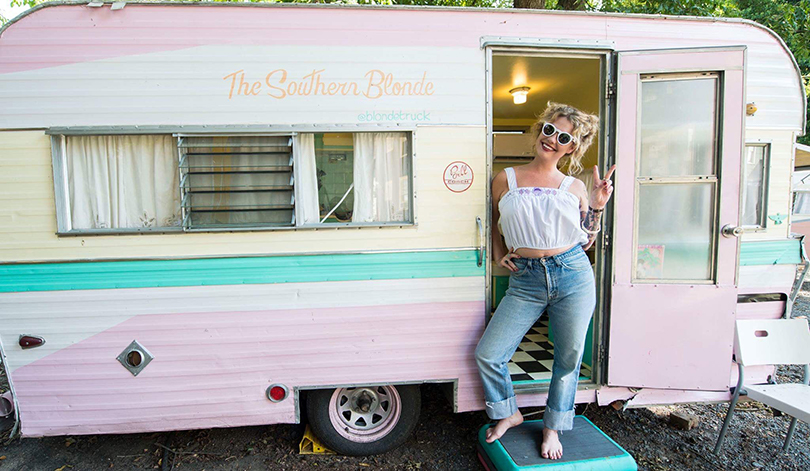 After less than two years, The Southern Blonde mobile salon is getting ready to park the camper, at least part time.
“We are very close to our brick and mortar. It’s just right around the bend. I can’t wait,” said owner/founder Cheyenne Matthews, 30.
The Southern Blonde, which Matthews currently operates out of a restored 1962 Shasta trailer, will soon be open in the South Main neighborhood of Little Rock. Matthews said the choice of location was obvious, not only for matching the company’s funky, individualistic vibe but for the many friends she has among fellow business owners there.
“I’m really about all the homies, all the people that I’ve known for so many years that supported me,” she said. “[SOMA is] where I want to be, all together having a community.”
Those who know Matthews well may be surprised to hear that she’s taking such a permanent step with her company. She left her native Arkansas for Hollywood with the intent of being an actress, only to find when she got there that she wasn’t very good. (Coming in second for the FrogTape Girl, the face of a product of the same name, was the zenith of her career.)
Matthews launched The Southern Blonde in 2017, providing individual salon and spa services by appointment as well as serving the bachelorette, birthday and other girl-power party niches. In the early days, she split her time between Little Rock and Austin, Texas, another address she gained via her wandering jones.
“I literally had two residences, one in Little Rock and one in Austin, Texas, on the east side,” she said. “I had a camper there and I had a camper here and I would travel back and forth. For eight months I did that, trying to run both businesses.”
“I then decided to ultimately say it’s OK to admit that this is killing me. I’m going to focus on one place and chose Little Rock to be that place. That’s when I just came back all the way.”
Matthews said her signature pink-and-pale blue camper, dubbed Lucy, will be pressed into service for special events and other business functions. A second camper, a 1966 model named Belle, will be used primarily for community service purposes.
“We’re going to call it the Community Camper and it can be multi-functional,” Matthews said. “That one is going to be used for community events and just Little Rock’s needs in general, whether it’s going to be homeless haircuts or food drives. It can do all kinds of stuff, just really whoever wants and needs to use it, they can.”
Matthews’ spunky, spirited nature has a deeper side, particularly when it comes to her company. Asked what her target demographic is, she simply says, “people that want and need me,” which gives you an idea of how personal this line of work, and her clients, are to her.
“They give me a sense of purpose in my life, completely,” she said. “That has never changed and will never change; these people give me a purpose every single day. Whoever that may be, regardless of tax bracket, if you want me and need me that’s my target audience. And the people I see daily are, I mean, it is anybody you can think of. They are everyone.”
“I will tell you that this career path saved me from myself, saved me from depression, really gave me a sense of purpose and sense of self. I think that being needed and wanted again is really important.”