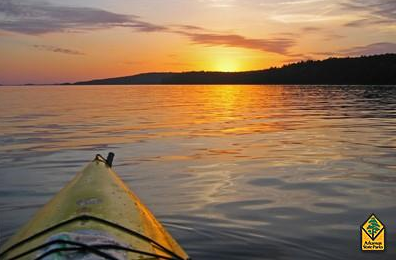 At 40,000 acre, Lake Ouachita is known as the largest lake in the state. The lake is surrounded by the Ouachita National Forest and is a favorite for those who enjoy the outdoors.

We just got word from Lake Ouachita State Park interpreter Kayla Gomance that the park is taking reservations for their Spring Kayak Campout Adventures. These are set to take place April 22-23 and May 6-7.  Participants can bring their own kayak and camping gear or rent from the park. Meals, lunch and dinner on Saturday and breakfast on Sunday, will be provided by the park and interpretive programming will also take place throughout the venture. On average, the trip, which is $85 per person, entails paddling around five hours each day. Camping will take place at night at one of the islands on Lake Ouachita.  To register for this event contact the park at 501-767-8148.

Speaking of island camping:  “There is nowhere else in the state that I know of that you can do island camping,’ said James Wilborn, Assistant Superintendent at Lake Ouachita State Park, which is found on the eastern shore of the lake. “The only reason island camping exists here is probably because of a unique location and the fact that there are multiple federal managers within the area around the lake.”

Wilborn said the activity provides a chance to enjoy a wilderness experience.

“It is just as cool as it sounds,” he said. “There are still people around, people passing on boats, but you are going to get that feel that you are isolated a little bit…There are some very nice shale beaches where you can relax and swim and enjoy the lake. There is lots of wildlife to see, deer and racoon, and bald eagles in the winter and spring.”

Wilborn said there are dozens, maybe even hundreds of islands off the lake. There aren’t any official names for the islands but some do have navigational markers on them. Due to this, the most common way they are referred to is by their marker. Each little region of the lake has islands that are known to that region and some are also known by a nickname such as Crawdad Island and Hotel Island.

According to Wilborn, it depends on water level as to where the good camping sites are and the time of year determines where is best to camp on a specific island. Backcountry rules apply while overnighting on an island, including not camping there for more than 2 weeks, keeping the site clean, and a pack in pack out principle.

Overall, the experience is one you can only find on Lake Ouachita.

“It’s kind of a cool thing to do, to go out and have a whole island to yourself,” said Wilborn.