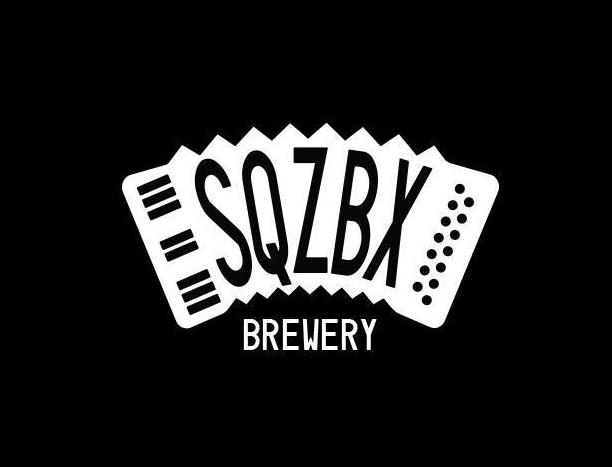 SQZBX, aka ‘squeezebox’, is a new family owned pizza spot and brewery located at 236 Ouachita Avenue in Hot Springs. It was built and is run by Cheryl Roorda and Zac Smith, two well known musicians in town. “As The Itinerant Locals, we have played tuba and accordion in Hot Springs and central Arkansas for the past fourteen years,” said Smith. “We named the place SQZBX as a reference to the squeezebox that Cheryl plays. Tuba’s just didn’t have the right ring to it.”
The couple, who have two children named Eureka and Zephyr, bought the historic building SQZBX is housed in from Joe Davis, who had owned it since the mid 50s. “The building was built about 1925, consisting of three addresses, separated by long shotgun walls,” said Smith.  “Joe was a piano repairman and tuner, but rented out the other addresses to a variety of businesses over the years. Speedy’s cafe, at 240 Ouachita (now home of KUHS-LP, the only solar powered volunteer run community radio station in the state, ) was a very popular lunch spot with students from Hot Springs High (now Clinton Campus). Other businesses over the years included an antique shop, a book store, a millinery shop, a locksmith, the Royal Lions Club, and a liquor store. Since we bought it, we have slowly renovated the building from the ground up, doing most of the work ourselves. We celebrate the history of the building by incorporating architectural and decorative elements that were here already into the finished renovation, such as recycling old pianos into the bar, and reusing the old facade and awning as interior dividers. We took advantage of historic tax credits for the build out, and recently won an award from Preserve Arkansas for excellence in a Commercial Personal Project.”

As to the types of brews can people find at SQZBX, Smith said his greatest inspiration comes from the German and Czech styes of brewing. “I am a fan of simple beers, that are flavorful, but won’t overpower the pizza and salads they are served with,” he said. “I brew in the tradition of the Reinheitsgebot, the 502 year old Bavarian beer purity law, using only water, malted and roasted grains, hops, and yeast. I use Hot Springs City Water, which has an ideal chemistry for brewing lighter beers, allowing me no further treatment beyond activated carbon filtration. I do not use extracts, sugars, adjuncts, flavorings, or fining agents. I serve directly from my brite tanks to the bar taps. Of course, as an Arkansas Native Brewery, we can sell growlers to go on Sunday.”
As to the pizza, “dough is made every morning, but the pizza crust you are served has been cold fermenting for two days before being hand tossed, topped with fresh ingredients, and baked right on the stone in a really hot oven,” he said. “The salads are fresh and huge, the bread is made in house, and the meats sliced daily. As you walk around to the bar, you will see the bright stainless brewery where your beer was brewed, then wander down the hall to KUHS-LP playing on the speakers.”
When you walk into the building, you pass by a window where you can see the pizzas being made. “When we designed the kitchen we wanted the front window to be like “pizza TV” from the sidewalk,” Smith said. “You can stand there and watch your pie be made, from stretching the dough to the toppings to the oven. I love the way that at night from the street, the dining room is cozy and dim, but the kitchen is bright and active. Between the front windows looking into the kitchen and the glass wall behind the bar looking into the brewery, we prove we have no secrets here. We are proud of everything we make, and want to show off our dedication to making food and beer in a traditional way, with modern gear.”
As to his thoughts on the burgeoning brewery scene in Hot Springs, “between SQXBZ Brewery and Superior Bathhouse Brewery, you could walk into Craft Beer Cellar, Core tap house, Steinhaus Keller, Copper Penny Pub, Maxine’s, Bubba Brew’s Taproom, Grateful Head, and the Ohio Club, if you could still walk after all that. All of those places have options for great beer, from made on premises, to regional craft, to international masters of the brewing arts. It makes downtown Hot Springs a great place to get
out on foot and explore, and discover all the other food, entertainment, and shopping downtown has to offer.”
SQZBX is open from Sunday – Thursday from 11 a.m.- 9 p.m. and Friday and Saturday from 11 a.m. – 10 p.m.