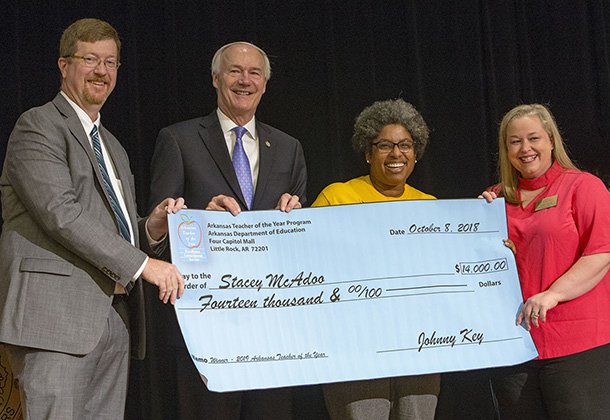 Every morning, Stacey McAdoo goes to work at Little Rock Central High School to teach communications, but she got a serious surprise in October when she arrived at work.
McAdoo was recently recognized as the 2019 Arkansas Teacher of the Year. Gov. Asa Hutchinson and Arkansas Department of Education (ADE) Commissioner Johnny Key honored McAdoo during a presentation.
A 16-year veteran educator, McAdoo teaches communication and Advancement Via Individual Determination (AVID) at Little Rock Central High School. She teaches ninth through 12thgrade students.
According to an ADE press release, McAdoo has taught speech communication at Little Rock Central High School since 2002 and both speech communication and AVID since 2007. Little Rock Central High School has been recognized as a “Highly Certified AVID School” since 2007.
Hutchinson praised the role that teachers play in the lives of their students and the impact that they have on the future of the state and country. “Second to parents, teachers play the greatest role in shaping our students,” Hutchinson says. “Their ability to guide, teach and positively influence the next generation is one of the greatest responsibilities in any profession. What they do in the classroom can impact the future of the state for years to come.”
RELATED: Read the October issue of AY Magazine!
When recognizing McAdoo, Hutchinson thanked her for the contributions she has made to her students. “In Arkansas, we are blessed with an abundance of first-rate teachers, like the 2019 Teacher of the Year, Stacey McAdoo. Congratulations, Stacey. Arkansas’ future is even brighter because of your investment into the lives of our students,” Hutchinson says.
Key also praised McAdoo, citing her creativity and her engagement with students as some of the distinguishing qualities of her teaching. “From incorporating rap and slam poetry in the classroom to utility creative opportunities that foster parent, community and civic engagement, Ms. McAdoo serves as a model of excellence for all Arkansas teachers,” he says.
McAdoo graduated from Hall High School in Little Rock and received a Bachelor of Arts degree in Professional and Technical Writing from the University of Arkansas at Little Rock. Ina addition, she received a Master of Arts in Teaching from the University of Arkansas at Monticello and has been certified in multiple licensure areas.
As the 2019 Arkansas Teacher of the Year, she will receive a paid, year-long sabbatical beginning July 1, 2019 and a $14,000 award sponsored by the Walton Family Foundation. She was named one of four semi-finalists for the honor. The selection committee then visited each of the semi-finalists before making their selection.
RELATED: Arkansas Teacher of the Year Regional Finalists Announced