As Secretary of Arkansas Department of Parks, Heritage and Tourism, Stacy Hurst tells people all the time that she has the “best job in all of state government and potentially in all of Arkansas.”

With years of experience in public service prior to her current position, Hurst has learned what it takes to be a leader and effectively help those around her.

“I tend to want action and results, but I have learned that sometimes things take time and that’s okay. Particularly in government, change does not come easy to government,” she says. “You have to be diligent. You have to be thoughtful. You have to listen…I’ve also learned as a public servant that you have to be accessible and responsive.”

Gov. Asa Hutchinson appointed her to be one of the 15 cabinet secretaries last year during his transformation of state government. In her role, she is responsible for the 52 state parks, 14 welcome centers, eight agencies of historical and cultural interest and general promotion of the Natural State.

While Hurst is no stranger to challenges and hard work, she never expected the challenges that  the COVID-19 pandemic would bring.

“When I was appointed and took the job in July 2019, for the first eight or nine months it was great,” she says. “The hospitality [and] travel industry was growing in Arkansas…Everything was great in state parks and heritage. Then when the pandemic hit, it of course threw everyone in an absolute loop.” 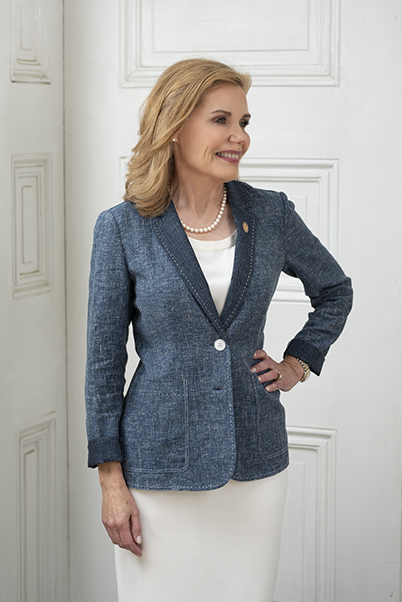 The state parks in Arkansas were limited to day-use only in April and then gradually reopened in May to protect the public health.

“It was a really difficult chore to navigate how we could leave state parks open to some extent because the public really wanted to be in our facilities,” Hurst says. “They wanted to visit our parks, and that was true across the country. People wanted to be outside and in nature…It was also a big challenge just in keeping our employees safe and making sure measures were in place to protect our staff.”

Furthermore, she is a member of the Arkansas Economic Recovery Task Force that helps make recommendations to the governor on how to support the economy and “maintain a reasonable level of economic activity during the pandemic.”

Hurst points out that the state is continuing to navigate ways to overcome various challenges, but “one of the really good things that has come out of this in terms of state government though is that we have learned that we can pivot more quickly when necessary.”

For her, the overall experience in leading during the pandemic has been “fascinating, demanding and very rewarding.”

She also says that “It has been very rewarding to serve in the Hutchinson administration because almost half of his cabinet is women and I have enjoyed seeing the many gifts that my colleagues who are women bring to the table.”

Out of the 15 cabinet secretaries, seven are women.

“They are gifted in their own ways [and] I think our conversations around the cabinet table are quite productive because we each have different skills and bring different personalities, characteristics and experiences to the table.”

When Hurst is not working, she enjoys spending time with her husband Howard and visiting their two grown children, Conley and Josie who both live out of state. They also have a 14-year-old mixed breed and a 10-year-old boxer.

Her advice for young women is to be more prepared than anybody else at the table and speak up.

“Don’t think that things are going to be handed to you just because you are a woman, but because you deserve that responsibility given to you, come to the table prepared and knowledgeable. Be honest and be yourself but always know the harder you work, the more you achieve.”

READ MORE: Anna Beth Gorman Lifts Up the Voices of Women in Arkansas