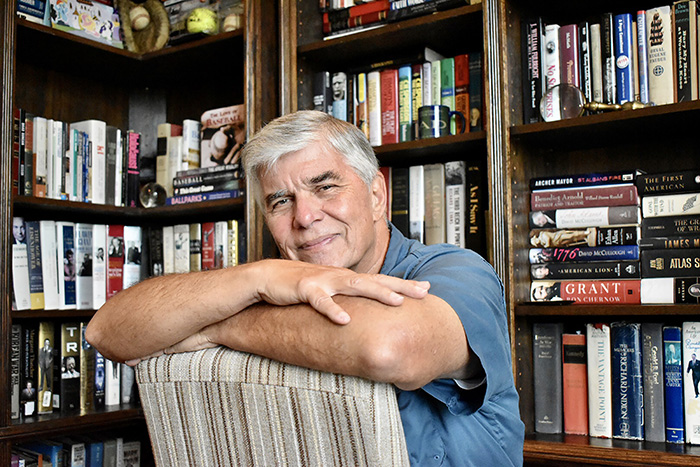 Although he was born on the East Coast, Arkansas can still claim new author Richard McKeown. Perhaps you’ve heard of his hometown, St. Albans, Vermont, but in case you haven’t, do not worry — McKeown’s recently released novel State of Redemption paints the perfect picture of the quaint small-town life. But with a dash of murder and the pursuit for justice to add a little more excitement.

McKeown may have spent his childhood in Vermont, but after his father’s job sent the family down south to the state of Arkansas, McKeown became fully immersed in Natural State life. He attended Rogers High School and later received his degree in journalism from Arkansas State University. Now, with his children out of the house and an army of grandchildren giving orders, McKeown proves that it’s never too late to do something big.

“I never really thought that I would write a book one day,” McKeown says. “I had this concept and this story wallowing around inside my head for several years, and I finally decided to just sit down and write.”

The story in question is based on a real event that happened while McKeown was living in St. Albans. Like all great settings for a murder, St. Albans was always peaceful. A small town with normal people living mundane lives, nothing as sinister as murder would have ever been expected. 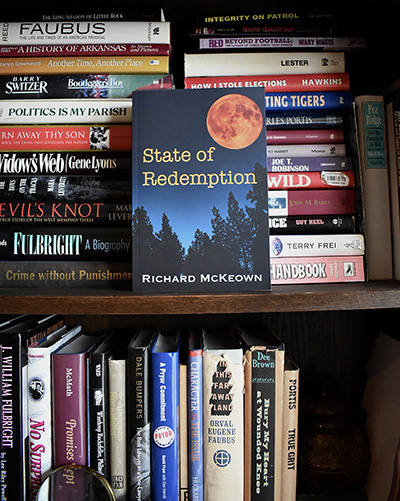 “There was Main Street with all the shops, the big park in the middle of town, Church Street with all the churches, but in the middle of town was the city hall, which housed the police department,” McKeown says. “As a paperboy, I delivered papers, and I’d read the news. When I was 10 or 11, I remember there being a murder behind the city hall, where the police department was. You hear that all the time,‘That never happens here,’ but it really never did. And I just remember that record, and I thought how ironic that [the murder] happened right behind the police department. This has just always stuck in my head, and then at some point, I decided that might make an interesting unsolved murder.”

Based on locations in St. Albans, McKeown created a fictitious town in Vermont called “Milford’’ for the novel. The events that take place may have been inspired by the murder from McKeown’s childhood, but everything else — from characters to story to details — are all products of his creative mind.

State of Redemption follows the main character, Matt Matheny, as he moves back to his hometown as an adult after 30 years of being away. While back in Milford, he recalls a murder that took place when he was a child that, of which he was a witness. In comes District Attorney Tommy Branscum, who is the only other witness to the murder of Caroline Dawson, a girl who was not born with the same privilege and status as Branscum and his family. Uncovering the truth and corruption buried in the past, McKeown’s story makes readers explore the world of justice and redemption.

Writing this complex story of morality, McKeown, a journalist by trade, found himself in uncharted territory when it came to developing the characters. Characters are naturally the focal points of stories — next to theme and plot, of course — so he quickly realized how present the characters become in an author’s life.

“Somebody wisely told me during the writing process that people read novels as much for the characters as they do for the story,” McKeown explains. “That really kind of stopped me in my tracks for a little while. I had to develop the characters a little more deeply and focus on how they would react to certain situations or what they would say. I had them in my head, and they basically lived with me during the entire process. I was constantly thinking about their next moves.”

One character, in particular, Branscum, held a special place in McKeown’s focus. His story may be the most layered in the novel, and McKeown is always eager to find out people’s opinions of the man.

“I always enjoy hearing feedback about the book from readers,” he says, “but what I really love is asking readers, ‘What do you think about Tommy?’ There are always different opinions about him, and I did that on purpose. He could be the villain, or he could be a sympathetic figure; he’s a character that’s supposed to make you feel a bit conflicted.”

The new author took his time piecing the story together and deciding how each character’s story ended. The details and interwoven storylines at times felt overwhelming for McKeown.

“One of the challenges was when I would go away from the novel and come back trying to string the book together in chunks,” McKeown shares. “I didn’t see writing sections as chapters so much as portions of the book because the book isn’t really a mystery; we know who did it about a third of the way through. But the big question for me writing the story is ultimately: What is the character going to do in the end? I really didn’t know what they were going to do until I got around two-thirds of the way through the novel. I had to stop and write the final chapter just so I knew where to place the pieces building up to the end.

“But on the flip side, it was kind of fun for me to not really know myself what was going to happen until I finally made the decision at the end what the character was going to do.”

Although we are surrounded by technology, especially during 2020 when McKeown wrote the novel, the journalist made the choice to handwrite the novel’s first draft. Considering the length of the book, 431 pages, you can imagine the state of McKeown’s hand at the book’s completion.

“I chose to write the story on legal pads. [Writing by hand] was easier for me in terms of I think I’m able to create better when I’m handwriting rather than keying in information if that makes sense,” McKeown laughs. “[Writing by hand] is a little more of a reflective process, to be able to cross things out rather than go back and correct them on the computer. I wouldn’t necessarily recommend that to anybody else, because the process of going back and reading my scratches in my notes and in the margins was pretty tedious, but in the end, it was worth it. Although, I had this fear while seeing these notebooks stacked up in piles on the floor that if there were a fire, I’d be done.” 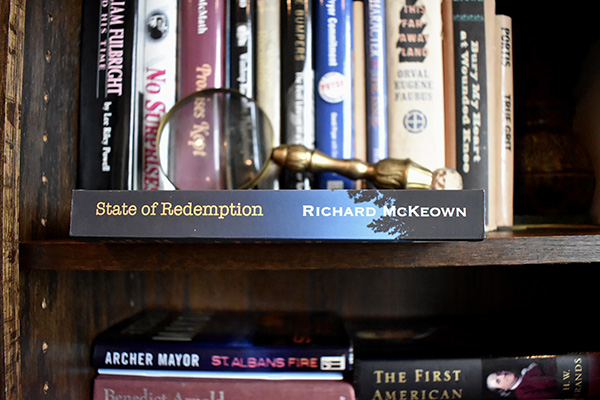 For a journalist who never imagined writing a book one day, he’s already making plans for a second novel. McKeown is excited about the reviews he has received on his debut. As any reader agree, there are books that you read and enjoy, and there are books that you read and can’t put down. McKeown is thrilled to hear that State of Redemption is being regarded as the latter.

“The most gratifying thing to me is to have people say, ‘I wanted to find out what happened to these people in the story, so I wanted to get back to the book every chance I got,’” he says. “I think the phrase that describes a book as a ‘real page-turner’ is a little bit overdone … but if I can generate in people a need to continue reading my story, I’ve written the story right. I wanted to create some curiosity on how this story is going to play out, and I’ve heard people say that they just couldn’t wait to get home from work or to put the kids to bed because they really wanted to finish my book. I think that is probably the highest compliment I’ve gotten, and the fact that somebody has enjoyed it makes it even better.”

He had doubts in himself at the start, as many writers do. Writing an extensive piece, especially a novel, takes a large amount of time out of the day, so you have to be passionate about what it is you’re putting out there. McKeown recalls going through an internal conflict of whether or not he had the skills to tell the story.

“I knew I wanted to write about justice, but I always thought, ‘Can I do it the right way?’ I always had that in mind,” he says. “I knew that I had the nuts-and-bolts of a good story, but being able to tell it — and tell it well — is something completely different. Ultimately, I just had to write it. If the story stays in the head, it’s not doing anyone any favors. I just had to write.”

His confidence is regained, and his creative mind is still running with potential stories to tell. This New England boy-turned-Arkansas writer plans to stick around the literary scene for a while.

“As long as I have a story to tell and I enjoy what I’m doing, I’m going to write,” he says.