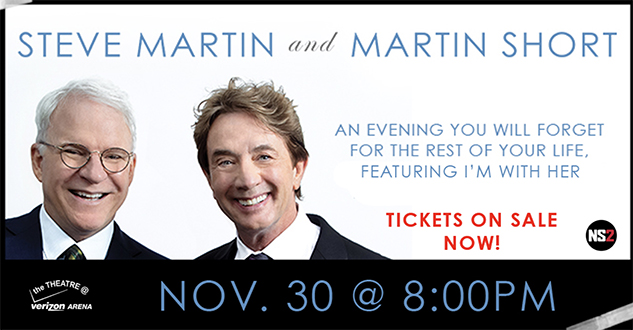 This Friday, Steve Martin and Martin Short are bringing their comedic and musical talent to Arkansas! Come see the legends as they bring their “An Evening You Will Forget For the Rest of Your Life” tour to Verizon Arena.
The performance will feature live music, stand-up comedy, film clips, and the two conversing about their experience as showmen. Martin and Short will be joined by Short’s pianist Jeff Babko and folk trio I’m With Her.
Martin told reporters that the two like to mix up the show by collaborating together while also performing solo acts during the show. The duo normally collaborates with the Grammy Award-winning folk band The Steep Canyon Rangers, but the band was unable to make the North Little Rock show.
The current tour is coming to a close and the new tour will be called “Now You See Them, Soon You Won’t” in 2019.  Martin told reporters that the show has changed a lot since the original Netflix special with new material frequently being added and keeping the material that the audience seems to enjoy.
Join the fun on Friday November 30 for a night full of great laughs and catchy music. The show starts at 8 p.m. Get your ticket at Ticketmaster.com or at the Verizon Arena box office. Call (800) 745-3000 for more information.
Other Upcoming Events:
January 21, 2019
Beach Boys
The Beach Boys are coming to Little Rock’s Robinson Performance Hall. Join Mike Love and his band as they take you back to the 1960s! Get your tickets at ticketmaster.com.
February 15, 2019
James Taylor
James Taylor is coming to Verizon Arena with special guest Bonnie Raitt! Get your tickets at ticketmaster.com.
September 1, 2019
“Weird Al” Yankovi
The legendary “Weird Al” Yankovic is bringing his “Strings Attached” tour to Verizon Arena! Get your tickets at ticketmaster.com.
September 5, 2019
Kiss
Kiss is coming to Verizon Arena September 5, 2019 as part of their “End of the Road” World Tour! Tickets go on sale December 3. Visit www.kissonline.comfor more information.
RELATED: Arkansas Christmas Event Calendar
Photo courtesy of Verizon Arena