STOMP Brings the Energy to Little Rock This Week 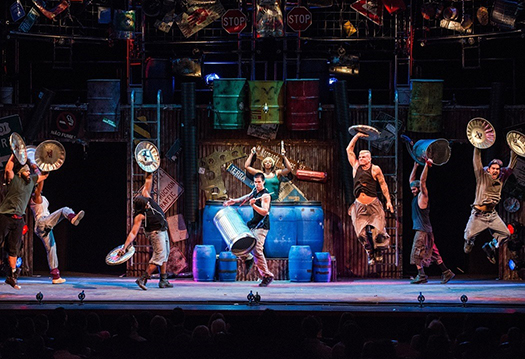 You know that kid in eighth grade who sat behind you in class and tapped his foot and pencil and you thought you might lose it? If he was smart, he would audition for the longtime musical STOMP, which has been a part of both London’s West End and off-Broadway for decades now.

The 105-minute percussion only (there were a few words heard from the performers) is at Robinson Center tonight and tomorrow night, and it will wake you up if you ever get bored at the theater. Last night was night one, and the crowd loved it! As did I.

For those who haven’t seen it or avoided it because, well, you don’t want to be entertained, it is so fun. The eight-member cast with two awesome females all keep the beat, and even get the audience involved with their broom-pushing, trash-can lid hitting performances. It even gets a little loud, but it’s a volume that brings energy. The cast is so good; one performer will crack you up with his deadpan. You’ll laugh, you’ll clap, and you’ll want to go back for more.

Celebrity Attractions always brings quality performances to Little Rock’s Robinson Center. The new season will be introduced tomorrow! Get tickets for the final two performances by going to www.ticketmaster.com or calling the box office at (501) 244-8800. Both shows are at 7:30pm and you’ll get out of the theater a little after 9:00pm. Great show for all ages, though younger children might want to get on stage and make the noises, too.