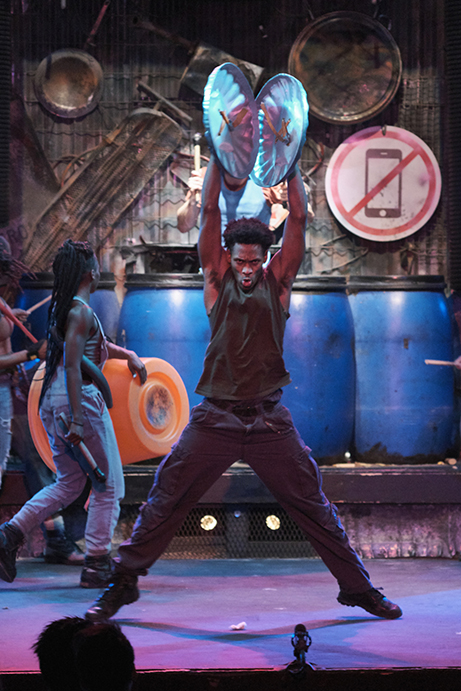 Music will come alive this week as the musical experience STOMP explodes onto stage at the Robinson Performance Hall.

This wordless show features an eight-member cast who work together, using their creativity and rhythm, to create extraordinary music with mundane objects. Whether it is Zippo lighters, brooms, wooden poles, garbage cans or matchboxes, these talented performers can conjure beautiful sounds out of them.

Long Island, New York native Cary Lamb is one of those talented performers, who uses a life-time of dance training to infuse STOMP with his own unique energy. Lamb has tap danced for the New York Mets, the Brooklyn Nets, and at the Apollo Theatre, as well as performing for artists such as Missy Elliot, Chance the Rapper, and Snoh Allegra.

The cast, he says, uses a variety of objects to create the sounds of the show. Although there is no spoken narrative, each character expresses themselves in a distinct manner, using their own rhythms.

“Each character on stage has their own roles and things they do,” he says. “I’m fortunate enough to play one of my favorite characters, Particle Man. He has the finesse – that’s who I am versus my fellow performers who have other roles where they are all about the music or all about the comedy,” Lamb says.

Almost half of the show is improvised nightly, making each performance an electric experience. You never know what to expect when you see STOMP – each show is different from the last.

The cast members’ backgrounds play a major role in how they create their characters and perform. Different performers can create more hip-hop sounds if they grew up listening to the music, like Lamb, or adopt other musical sounds.

“I was born in the 90s and lived in the 2000s, so when I write a solo, it is very hip-hoppy and very current versus someone from a different walk of life, they might have a funkier rhythm or funkier solo,” he says.

This freedom to improvise was nerve-wracking for Lamb, at first, but he eased into it. Now, the improvisation is the highlight of the show. “It is very satisfying as a performer to make everything different,” Lamb says.

For Lamb, STOMP is all about capturing the moment and not letting anything keep you from being creative. On stage, the performers use items that are found in everyday life to create music. There’s no reason, he says, anyone else can’t do the same thing.

“The show, without a doubt, has inspired me to make it happen.”

The show will be at the Robinson Performance Hall from Tuesday, March 10 through Thursday, March 12, at 7:30 p.m. nightly.

Get your tickets here.