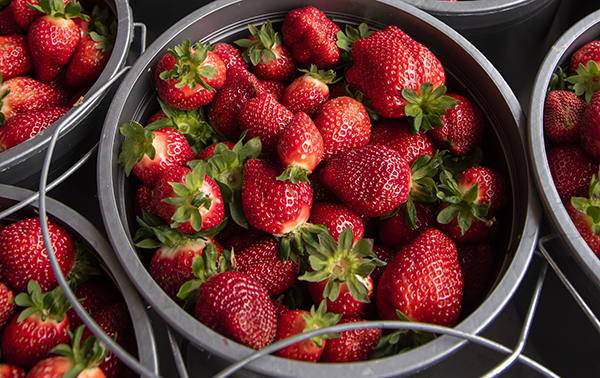 Holland Bottom Farm is ‘Berry’ Glad to Meet You

The hot July moon isn’t quite here, but the strawberries definitely are. Wines, jams, pies, cakes or straight off the vine, strawberries are undoubtedly a versatile fruit and a favorite of many. For any strawberry lovers looking for a fruity fix, Holland Bottom Farm in Cabot is the place to go.

Planted in the soil for almost 30 years, the family operation at Holland Bottom Farm has grown from a mere seedling to sweet success.

“We were row-cropping back in the late ’60s and ’70s while my father was renting the [farm] from a man in Dallas, and he said that he would sell it to my father, and that’s how we got the farm,” says Tim Odom, owner of Holland Bottom. “Long story short, we started growing strawberries in 1982 and continued on from there.” 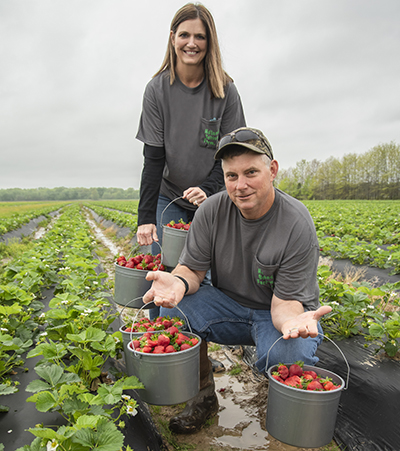 The family switched to strawberries and other produce from row-cropping after interest rates increased in the ’70s. According to Tim, strawberries saved the farm.

“Trying to pay rent on the property and the mortgage just wasn’t working with row-cropping, so we switched to strawberries. We did ‘u-pick’ berries up until ’96, when we switched to a pre-picked operation,” Tim says. “When my father passed away in 2015, I inherited the farm and kept it going.” 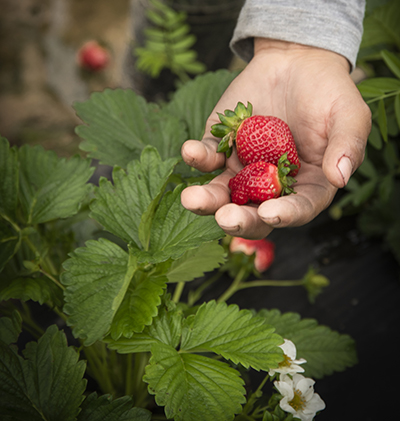 Part of keeping the farm going is rolling with the typical obstacles farmers run into — this year’s rainfall, for example, and building a new structure when the highway was widened. But Tim confidently says, “We’re making it.”

This new building had helped Holland Bottom Farm make room for some updates that guests can enjoy when they stop by for their fill of strawberries and other produce items. 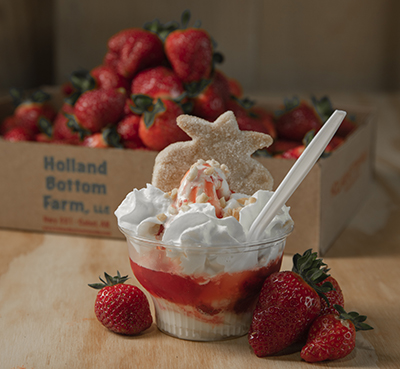 “People used to just come and get their produce, but now we got this bigger store where you come inside and it’s decorated. We’ve got an ice cream machine, we’re making shortcakes, we have a commercial kitchen where we can eventually make pies and breads, and we’ve upgraded to bathrooms — no more porta-potties,” Tim laughs. “[The farm] just kind of grew, or morphed.”

Strawberries tend to produce berries for four to six weeks, and Tim says that if they’re lucky, they can get eight weeks out of their crop.

“Rain is a headache for strawberries. We do an irrigation drip so we don’t need rain in strawberry season,” Tim shares. “I don’t mind it raining once in a while, but I just have to make do with what God gives me.”

On top of strawberries, Holland Bottom Farm grows just about anything that can go in the ground. Next on the vine is the cobbler’s best friend, blackberries.

People come from all over to get a taste of what the Odoms are growing.

“I have two acres of blackberries that we’ll start picking this summer. I grow a little bit of everything from blackberries to blueberries, watermelon and cantaloupe, squash, cucumbers, tomatoes — I’m probably forgetting something, that’s what happens at my age,” Tim says with a laugh.

For decades, the Odoms have worked long days year-round to prepare for growing seasons, nurturing their produce and helping the farm continue to blossom.

“From February on, we are nonstop. People don’t see it because we’re busy and getting everything together before we open,” Tim says. “Right now is a busy time, and it’ll go all the way into November. Then we’re doing paperwork.” 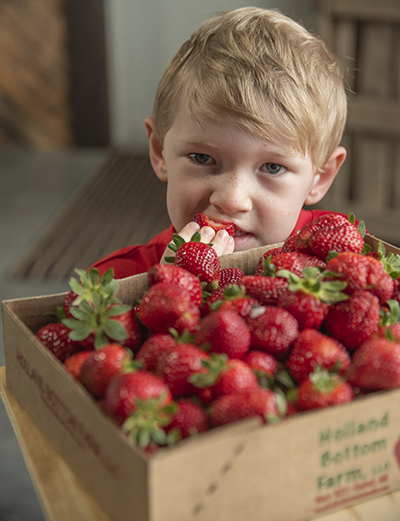 Like two peas in a pod, Tim’s wife, Leslie, is right alongside him taking the farm to new heights. The two have a daughter who helps out when things get busy, and the Odoms have grown a close-knit group of workers. All of these hands play a significant role in making a visit to Holland Bottom Farms unforgettable.

“We’re going to try to open at about 10 a.m. every day as the season progresses and stay open until 6 p.m. We are going to try to stay open more throughout the year, maybe three or four days a week all year long,” Leslie says. “We’ll have breads and pies in the fall, and we worked hard on getting the strawberry shortcakes together for this year; maybe we’ll have strawberry pies in the future.” 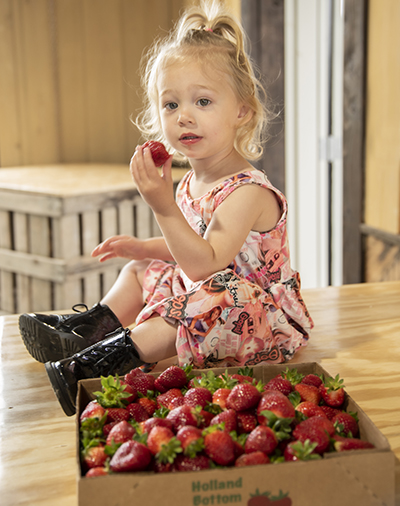 Luna enjoys a ripe strawberry while waiting on her mother.

After picking out their pre-picked Chandler or Ruby June strawberries, guests can settle down with a few shortcakes, pick out some jams and maybe even buy some jars of fresh honey from the Odom family’s beehives.

“We always want to keep changing, keep adding to the farm,” Leslie says. “We’ll soon have grab-and-go fresh fruits and vegetables rolling out this year, fresh frozen foods, salads — [we] like to keep people interested.” 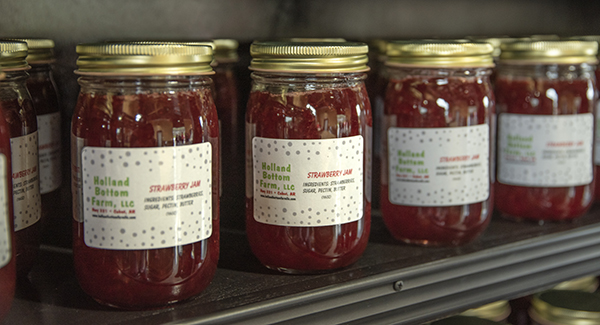 Both Leslie and her husband agree that their fruits, especially the strawberries, taste best straight off the vine. Pies, cakes and all the other sweets are good, but Tim says, “There’s nothing like having a strawberry as soon as it’s picked.”

Growing up with the farm, the Odoms have 10 acres full of memories — and then some. 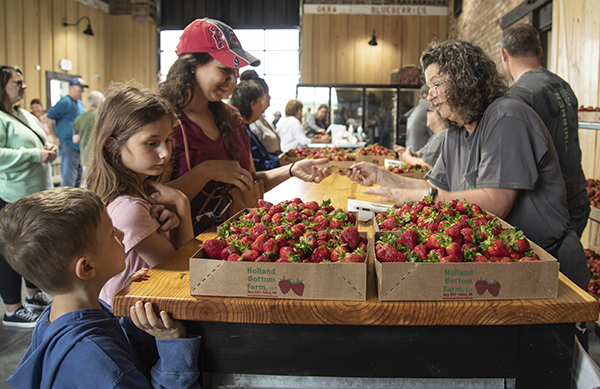 “I guess every year brings new favorite experiences,” Tim says. “I enjoyed growing up out here on the farm. We meet people, so many people that we can’t remember all their faces, but we’re excited by every person that comes through. I’ve experienced going from a little kid to working in the cotton trailer to the building we have now. We’re blessed.”

Located off Bill Foster Memorial Highway in Cabot, the Holland Bottom Farm Family is ready to serve ‘any-berry’ that grants them a visit.