Surviving A Stroke: A Love Story

Charlie the malti-poo races to the front door at the sound of a stranger, his shrill yaps slicing through the tranquil afternoon of the upscale country club neighborhood. He’s a pint-sized fluffer, but like a lot of small dogs, he doesn’t seem to know that. All he knows is there’s someone unfamiliar here. All he knows is to protect the people he loves.

Kathy Perkins, the matriarch of this tastefully elegant home, is one of those people for whom Charlie stands his post and for whom he lolls for hours on end. Kathy doesn’t even like dogs; at least, she didn’t until Charlie joined the family. Now he’s a wellspring of companionship and unconditional love that helps Kathy put her day into focus and her life – her post-stroke life – into perspective.

“You just have to stay positive and try to go forward,” Kathy says in a soft voice. “This is a marathon; it’s not a sprint. I think that’s true.”

As special as he is, Charlie is hardly the only member of the family devoted to Kathy or as protective. Her husband of 25 years, Fred Perkins III, is never far away and as the myriad of photos tacked to the fridge and lining the walls attest, neither are her three children, twins Bennett and Brandon, 18, and Kendall, 20.

“After her stroke, when she was still in ICU, I just broke down,” Kendall remembers. “I know we’d fought so many times, but I was like I don’t know what I would do if I lost her at this point. It just made me realize you have to hold on to the ones that you love. It’s just really brought my family close together.”

On June 23, 2017, Kathy Perkins was returning to her office at the Rose Law Firm following lunch with a client. She cut a dominating figure even for those who knew her best, her trim and stylish exterior housing a carnivorous tenacity when servicing her clients.

Fashioned of modest beginnings in Carlisle, Kathy was of that particular species of small-town kids with a furnace of ambition and a chip on her shoulder, bent on besting her peers in anything they cared to contest. Where they earned one degree, she earned three; where they joined clubs and organizations, she led them. Where they formed friendships and made contacts, she perfected it, earning Miss U of A and top-10 Miss Arkansas honors. Even something as pedestrian as music was not something done casually – she had a baby grand piano in her college apartment.

By the time she graduated law school and passed the bar, she was the can’t-miss blue-chip prospect the Rose Law Firm was happy to land and, in the years to come, bent to her considerable will the sometimes-conflicting roles of wife, mother and successful attorney. It wasn’t always a picnic.

“Before my mom had her stroke, our relationship was always really, really rocky,” Kendall says. “I had already been away at college for a year, and it was still very rocky. We’d fight back and forth. She would just instruct me on what to do and wouldn’t really listen to what I had to say. She’s always wanted the best for me, but she was just a lot more harsh on me.”

What Kathy could not control was what was brewing in the bloodstream to her brain. Even today, with the benefit of hindsight, she doesn’t see anything that could have forecast that summer’s day two years ago when her purposeful stride down the law firm’s corridor came to a halt, yawed left and took her down.

“I remember seeing people going past me and looking at me,” Kathy says.. “And I remember a partner coming up and wanting Fred’s phone number, and I had no idea what was going on. And he said, ‘I need to call the ambulance, and I want to call Fred first.’

Fred made it to the emergency room in time to see Kathy wheeled into a chapter of their life together he could never have expected. The two met the first day of law school – she’d been tipped to look for him by his relatives who lived in her hometown; he was intrigued by the baby grand story – and they married shortly after graduation. Like Kathy, Fred was also employed by a prestigious law firm, Wright Lindsay Jennings, but unlike her, he built his reputation as a leading mergers and acquisitions attorney by doing everything he could to stay out of the courtroom. 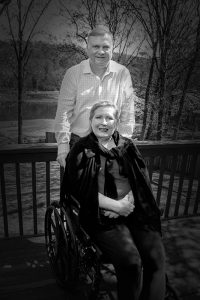 “We didn’t ask for this; it’s certainly not fair,” Fred says. “But it comes down to you can hate the situation and question why this is happening, or you can deal with it. We chose to keep on keeping on and deal with it, for better or worse.”

No life is perfect, but the Perkinses made a hell of a case for one; a power couple who belonged to all the right organizations, had all the right friends and regularly made the society and business sections because of it. Even the bumps in the road were spun for good, such as Kendall’s juvenile diabetes for which she was profiled in family magazines, bringing awareness to the disease and raising money to help others.

But there is little in the way of a silver lining to 96 hours of brain swelling or 10 days in the ICU or the way Kathy’s MRI erased all doubt whether the family’s life would ever be the same again.

“The next day the neurologist called us to come look at the MRI, and it was just white on the right side of the brain. I mean, a big white chunk,” Fred recalls. “I said, ‘That can’t be good.’ He said, ‘No, it’s not good.’

“She played tennis four times a week, sometimes more, was in great health and 50 at the time. He looked at the two of us and said, ‘She may walk with a cane, but this is going to be a long recovery.’ That was the day after.”

There’s nothing about the Perkinses’ life that emerged unchanged from Kathy’s stroke, from travel plans to Fred’s work habits to the daily routine that requires help with multiple activities of daily living. Kathy speaks clearly, but sometimes the words don’t come to her as quickly as she’d like. Raw emotion often interrupts a conversation too, borne from a tenderness of personality her kids had rarely seen out of their mother before.

“Oh, yeah. It has completely flipped,” Kendall says. “With her stroke, I just feel like I could sit there and actually have a conversation with her. Like being able to say what I have to say, and she’d sit there and listen. Before, she would interrupt me and give her two cents.

“Obviously, if we could go back in time, I wouldn’t want the stroke to happen, but I think one good positive outcome from this is that it’s mended our relationship.”

“This is just part of the stroke,” Kathy says of her personality change as tears streamed down her face. “It’s a good thing.”

Fred speaks of the family’s new normal with a weariness of someone who’s spent the last 24 months swimming up a tsunami of doctor’s appointments and physical therapy and in-home caretakers and around-the-clock concern and advocacy for Kathy’s well-being. He’s quick to praise their respective law partners for their incredible support, but the stone cold truth of the matter is 99 percent of their lives now rests squarely on him.

“We didn’t ask for this; it’s certainly not fair,” he says “But it comes down to you can hate the situation and question why this is happening, or you can deal with it. We choose to keep on keeping on and deal with it, for better or worse.”

There are things in life you cannot explain and the complexities of the brain – including its maladies – are high on that list. So it is that the condition continues to reveal itself in ways that the Perkins family does not understand but have learned how to accept, like all the minutiae planning that goes into a college visit or football game that most people never have to worry about.

But things are not all sobering, not by a long shot. The family recognizes the little graces that have come their way on this journey, too, such as the time Kathy spends at the Little Rock Athletic Club.

“That has been like a godsend to her because she gets out of a hospital setting. She used to play tennis at the club, and she runs into friends, people who talk to her,” Fred says. “She goes three days a week with a trainer who has worked with stroke victims before. He’s good with her emotionally, too. He’s connected with her, pushes her. He says, ‘If you won’t do these things, you’re never going to get out of that wheelchair.’”

The sessions tap into what’s unbreakable in Kathy, and she’s responded with the residual grit of the old days. Less than two years after her stroke, she can walk with a cane from the bedroom to the kitchen of her home, an achievement that brings a flush to her face both of exertion and pride.

“I look forward to getting more independent,” she says. “I think I will.”

Kathy’s condition has also been a lesson in planning against the unforeseen – wills, health directives, long-term care, plus a million little things. She always paid the bills, for instance, which cost Fred six months to learn all online bill pay passwords. Time has also revealed the family’s true friends and taught two very independent people how to ask for help.

“People are so good when called upon for support,” Fred says. “But just like a funeral, people think all is OK and go back to their lives. You can’t be scared or too proud to ask for help.”

What’s unspoken in the Perkins family is also what’s known the deepest – life, imperfect and challenging as it may be, must go on. Unlike Charlie, who will stand his ground until carried off, the kids have lives waiting for them at college and beyond; lives they have to live, lives their parents want them to live. When that happens, Kathy and Fred will be left behind to sort out together the salty from the sweet in life, morsels of moments vastly different than any they ever imagined.

“I didn’t know anyone that had a stroke, and I had no idea what that meant,” Kathy says as we say goodbye. “So maybe this [article] will help somebody else know what it could mean.

“We were going to be empty nesters, now I’m a caretaker,” Fred says with a shrug, his eyes moist. “I don’t want to look back and say, ‘I should have done more.’”

As he says this from the front stoop, a fresh breeze catches Fred’s face and the clouds that haunted the day start to melt under pale yellow rays of the sun. Back inside, Kathy looks at a small message board on a chair next to a bank of windows overlooking the backyard. In carefully aligned white letters it insists, “Everything’s Gonna Be Alright.”