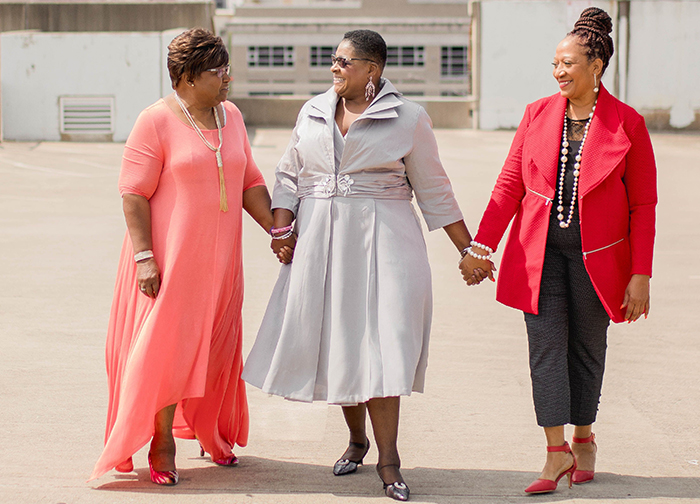 “I learned not to fear cancer,” are the wise words spoken by Fran Kelley, survivor of breast and cervical cancer. In 2016 at the age of 68, Kelley received the diagnosis that changed her life forever. She had been going in for mammograms every six months, following an exam that had shown small calcifications in her breasts, when one day she had abnormally heavy vaginal bleeding that soaked her clothing. Kelley thought it might just be a fibroid, but a friend urged her to see a gynecologist. Her primary care provider referred her to a gynecologist who performed a cervical biopsy and also scheduled her for a mammogram. The mammogram led to a biopsy, and the biopsy revealed that the calcifications in both breasts were, in fact, cancerous.

“Never in my mind did I imagine that she would call and say, ‘You have cancer,’” Kelley recalls.

Six days after the original cancer diagnosis, Kelley got the call that her cervical biopsy revealed she also had cervical cancer. She was shocked, because she had no family history of cancer.

“I always thought that if it’s not in your family, you don’t have to worry about it, but that’s not true,” Kelley emphasizes.

The good news, however, was that both cancers were caught early. Kelley chose to undergo a seven-hour procedure with surgery to remove the cervical cancer and a double mastectomy. At her post-op checkup, she was told they were able to get all the cancer out. She required no radiation or chemotherapy and remains cancer-free today.

Kelley also wants to encourage women to get their mammograms and pap smears regularly. “Cancer doesn’t have to be a death sentence,” she affirms.

What You Should Know 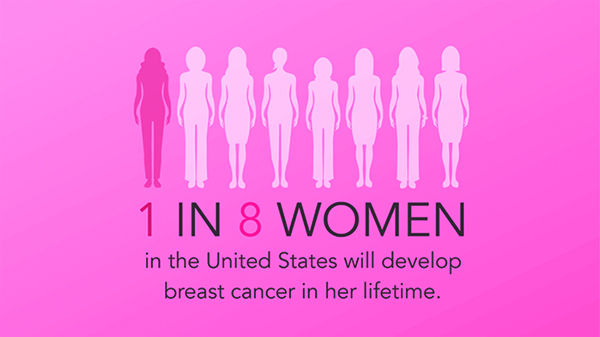 Breast cancer is the second most common cancer in women, occurring in one in eight women in her lifetime, according to the World Cancer Research Fund. The good news is that with modern technology and treatment, breast cancer is highly treatable and curable with an overall, five-year survival rate of 90 percent. 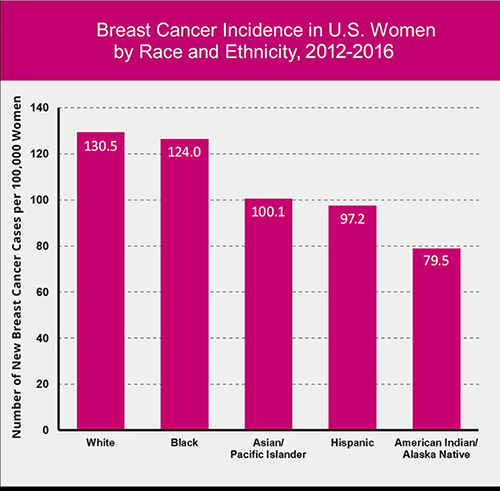 “It is also important to know that breast cancer can occur in women of all ages and ethnicities,” McElreath notes. “I have seen breast cancer in women as early as their 20s and every decade thereafter, with one in six breast cancer diagnoses occurring in women between the ages of 40 and 49.” 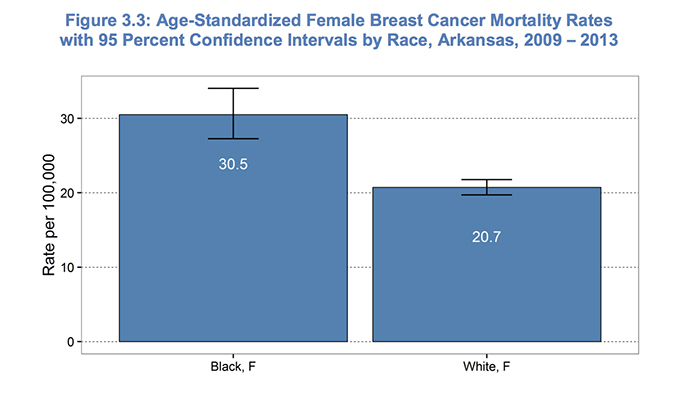 What Screening is Right for You?

When it comes to breast health, there are various ways to screen for cancers. Mammography, ultrasound and MRI are the most trusted. Kelly Pierce, M.D., a board-certified radiologist at The Breast Center MANA clinic in Northwest Arkansas, recommends mammograms as the gold standard, noting that 3D mammography offers improved breast cancer detection. It is recommended that every woman age 40 and over have a mammogram every year, and there is no age at which you should stop having mammograms.

“Women at elevated risk should talk to their doctor and begin screening mammography at an earlier age, sometimes as early as age 30,” Pierce says. 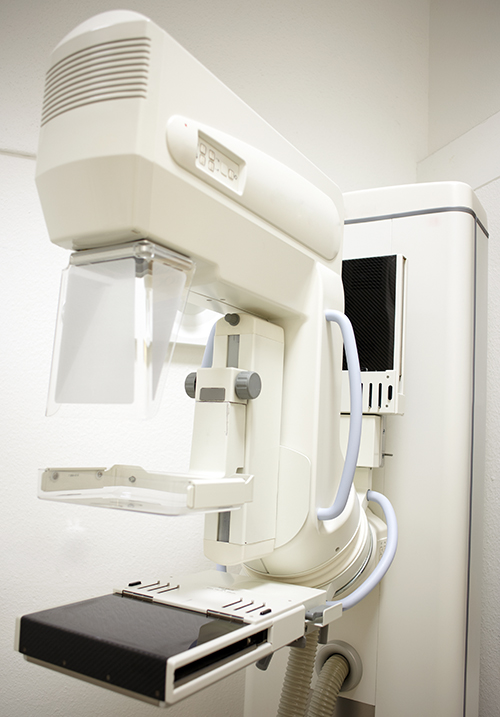 Pierce also recommends Automated Breast Ultrasound Screening (ABUS) in addition to mammography for women with dense breast tissue. These are the cases that account for more “missed” cancers on standard mammograms. Sometimes, breast cancer cannot be seen due to dense tissue. Around 40 percent of women have dense breast tissue. If you’re one of them, Pierce recommends asking the radiologist who is reading your mammogram.

Breast MRI is recommended for screening high-risk women and is the most sensitive test for detecting breast cancer, meaning it misses the fewest cancers. The drawback for screening MRI is that it also detects many noncancerous areas, which may lead to the patient undergoing a follow-up exam or a benign biopsy. Women with a lifetime risk of developing breast cancer greater than 20 percent, a genetic mutation or a history of chest radiation between the ages of 10 to 30 should get a yearly screening breast MRI, in addition to yearly mammograms. Screening breast MRI may also be beneficial for women diagnosed with premenopausal breast cancer for women with a history of breast cancer and dense breast tissue.

If a screening shows an abnormality, a doctor will schedule a mammogram and/or an ultrasound. This might also be followed by a needle biopsy. Fortunately, biopsy results are usually known within two days, and most patients are found to not have breast cancer. If cancer is found, treating breast cancer typically involves a team of physicians, including a general or breast surgeon, plastic surgeon, medical oncologist, radiation oncologist, radiologist and a genetic counselor. 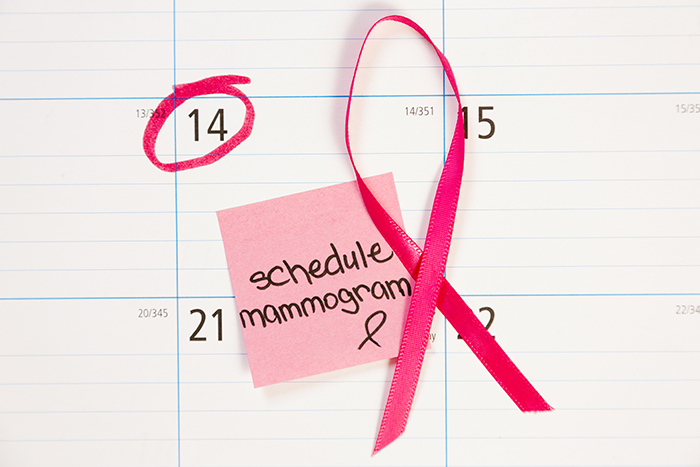 “During the pandemic, we have had women ask if it’s OK to skip their mammogram this year,” Pierce says. “We strongly recommend against skipping a yearly mammogram. Missing a mammogram could mean that a tiny cancer is missed and then found in the following year when it’s larger and more difficult to treat. Please, do not delay your screening mammogram this year. If you’re late, call to schedule an appointment as soon as possible.”

McElreath says, “I know having a mammogram is not something most of us look forward to, but an ounce of prevention is worth a pound of cure.” She also recommends women be familiar with their breasts so they can recognize a change such as a lump, a difference in shape, nipple inversion or bloody nipple discharge. If there is any concern, women should contact their doctor. 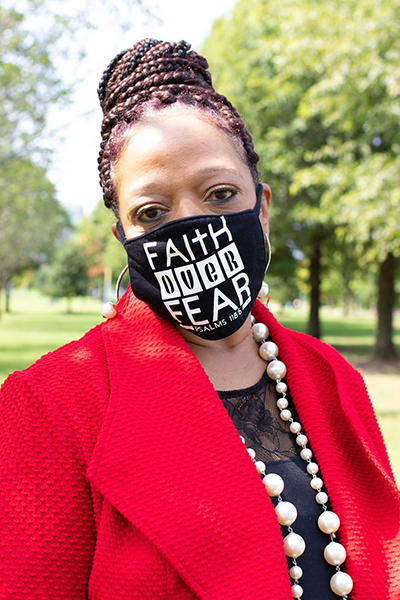 Janice Kelley (sister-in-law of Fran Kelley) lost her mother and aunt to breast cancer within two weeks of each other. Her mother was 50 years old, and her aunt was only 45. The losses caused Janice to pay closer attention to her own body, and when she noticed something unusual, she asked for a mammogram right away.

However, since she was only 37, her request was turned down. She went to a second doctor who ordered an X-ray and told her it was just a fibrocystic (noncancerous) mass that would go away on its own. So, she went for a third opinion. This time, they found a cluster — early stages of cancer. Janice chose to have surgery to remove the cancer, followed by three rounds of chemotherapy and 42 radiation treatments.

Nearly five years later, the cancer came back. She had another lumpectomy and underwent another 42 radiation treatments. Today, she is cancer-free and grateful for the opportunity to encourage other women going through hardships. In addition to her difficult fight against cancer, her past includes a series of traumas that include child abuse and a violent first marriage. Kelley uses these trials as a springboard for understanding and reaching hurting women. 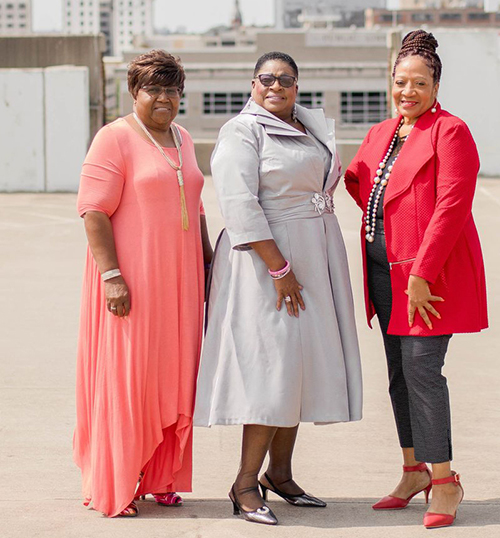 “I am blessed, and I am thankful,” she says. “I’m amazed at how God has healed my mind and my body.”

Fran and Janice Kelley’s friend Devaughnda (Vonda) Simpson has a similar story of finding strength in her faith and using her story to encourage others. She had a routine mammogram at 60-years old that led to her diagnosis.

“I got the call while at work,” she recalls. “When they said those words to confirm the diagnosis, I started to cry. A coworker asked what was wrong, and I told her, she hugged me and said she was praying for me. My first thought was, ‘Why me?’

“But now, I thank God for finding it at an early stage.”

Simpson is still relatively early in her cancer recovery. Following her one-year checkup, everything looks fine. She still worries about the cancer coming back, but she is focused on treating people with love, living her best life and encouraging others to get their yearly mammograms.