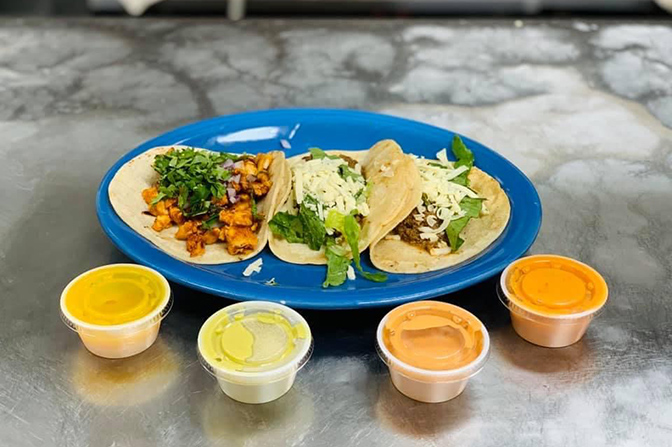 AY is bringing you a double hitter on this Taco Tuesday with not one, but two restaurants serving up some authentically unique flavors. Sergio Reyes and his wife Tina, owners of Amigo Loco in Damascus and Taco Local in Greenbrier, have found ways to bring traditional recipes to the community with a few tasty twists.

Six years ago, the Reyeses went out on a limb and opened their first restaurant, Amigo Loco, and only three years later opened their taco truck-turned-restaurant, Taco Local. “We wanted to do something different, something for everyone to try and enjoy our different flavors,” says Reyes.

A former resident of Ohio, Reyes has worked in many different Mexican restaurants and decided to put a spin on his own food. “I feel like [restaurants] always bring people the same flavors, and they get bored,” he says. “We try to go for a more authentic approach, but we still have the Tex-Mex flavor that people are used to.”

Pulling out all the stops, Reyes’ mother was brought into the business to help with traditional recipes. To only name a few of the authentic dishes featured, mole, a traditional brown gravy; menudo, a soup to cure even the worst hangover; and barbacoa, a traditional type of taco in which the meat is marinated, slow cooked and shredded. Sounds pretty good, right? As Reyes puts it, “Mom’s cooking is always good.” 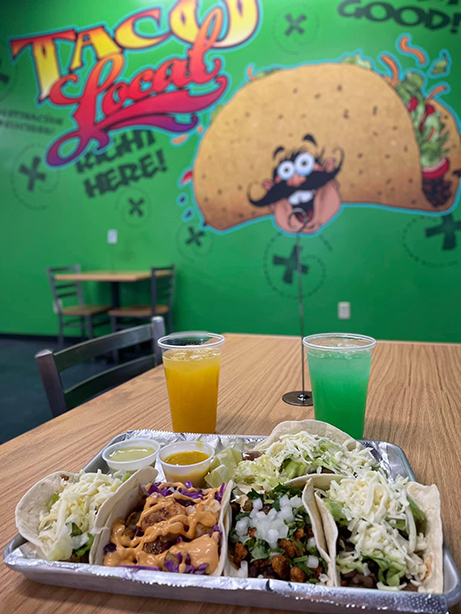 Between the two restaurants, there are too many tacos to count, but a rough estimate would be close to 30, with 20 of those being at Amigos Loco alone. From a breakfast taco to buffalo chicken tacos and everything traditional and eccentric in between, there’s something for everyone.

One special taco (the John taco) at Amigos Loco has a backstory involving a man named – you guessed it – John. Grilled chicken, grilled pineapple, chorizo and mushrooms, a custom recipe Reyes would make for himself until his friend John came in asking to try something different. People got curious about the taco John was eating, so the taco now has a place on the menu and is a customer favorite.

Other favorites, for both Reyes and customers, are the vegetarian taco, the grilled chicken taco (the most popular), the shrimp taco (red cabbage, grilled shrimp, grilled pineapple and spicy sour cream) and the carnitas taco. “The [carnitas] taco reminds me a lot of my childhood when I was in Mexico. Every Saturday morning, we used to go to one of my best friend’s houses, they sold carnitas with a corn tortilla, cilantro and salsa all over it. The carnitas were so soft and tender,” says Reyes. “I cook them here for about six hours. We put in oranges, limes, beer and Coca-Cola – all of it makes the pork tender.”

The steak taco holds a special place in Reyes’s heart because it’s his own recipe. “I like to brag on the steak a bit because I marinate the steak myself. The steak is marinated for two to three days making it very tender. The steak is only cooked for maybe five minutes on the grill, it’s really juicy that way. Steak, cilantro, onions, salsa verde, jalapeno sauce, you can never go wrong with that,” says Reyes. 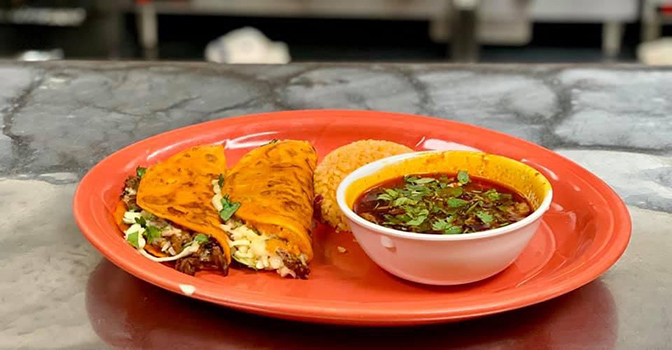 For more eccentric tastes, Reyes has tacos with saucy pork rinds on top and a ceviche taco to rival the traditional way of eating ceviche with crackers. “I said “Let’s make a taco with the crunchy shell, since we eat [ceviche] with chips all the time, and add a little lime, cucumbers and cheese. We try to be different,” he says. Staying on top of social media trends, the restaurant serves Quesabbirria tacos (tacos served with broth) on the weekends after popular demand from customers. The process of making the birria tacos required Reyes to start cooking at 5am, so the tacos aren’t an everyday item.

Taco Tuesdays are one of Reyes’s busiest days of the week due to the restaurants’ own weekly celebration of the day. With prices as low as $1, $1.50, $1.99 and $2.25 on select tacos, the day can’t get much better – except maybe with a slice of Tina Reyes’s homemade tres leches cake. If Tina isn’t baking sweets, she’s probably at one of the two restaurants helping out the staff. Even though not everyone working in the restaurants is related, Reyes likes to call his restaurants a family business. “I always tell my staff they are part of my family because I see them almost more than I see my own family,” says Reyes. The majority of his staff has been working at his restaurants since the restaurants’ openings. The customer family and community Reyes has established is always growing. Customers rave about not only the flavor of fresh food served, but the Reyes family as well.

Check out Amigos Loco and Taco Local on Facebook to learn more about the extensive menu of unique tacos.