Who doesn’t love a good, juicy street taco? I sure do! This week’s Taco Tuesday is centered around Tacos Atilano, a food truck serving spectacular street tacos to the people of Central Arkansas .

I’m a sucker for brisket tacos, and when I saw “Suadero (beef brisket)” on the menu, I knew what I would be enjoying. The taco was simple in appearance as it was chopped beef brisket on a corn tortilla topped with onion and cilantro, but the flavor was anything but simple.

The star of the show, the brisket, was seasoned with a beautiful blend of spices that gave the taco just enough heat without making a drink of water after each bite necessary. Two options of sauce were provided, and I opted for the vibrant avocado sauce that had an extra kick.

The onions and cilantro were fantastic as toppings. The crunch of the onions and mild flavor paired well with the soft corn tortilla. Cilantro is not my friend, but thanks to the large amount of brisket in the taco I didn’t even think about the green leaves I was eating. Jumping back to the shell, the corn tortillas were soft, airy, and doubled up to give a little more support for all the goodies inside. These tortillas were some of the best I’ve ever had and I’ll probably be dreaming about them tonight. 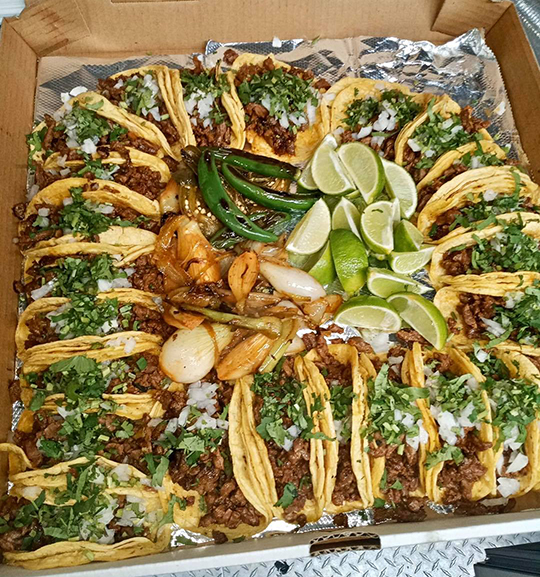 Tacos Atilano has two locations: Little Rock and North Little Rock. Their menu has recently been updated for the option of Taquiza: a pizza box full of 25 tacos. 25. Tacos.

On the normal taco menu, there are eight tacos to choose from, all of which sound amazing, and there is a meal of four tacos that includes rice and beans on the side.

Counting down the seconds until I can go back for more tacos – I’ll probably go for the 25.