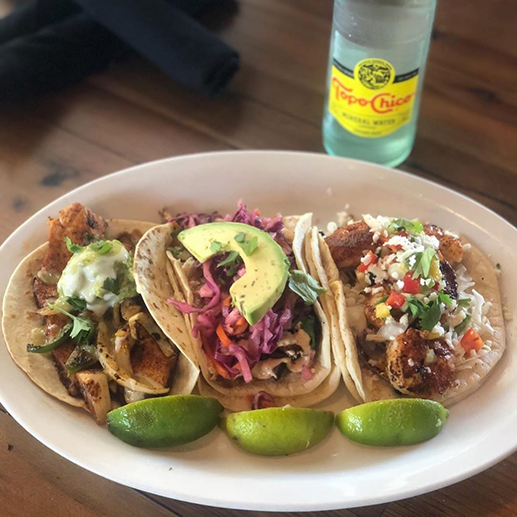 Every Tuesday AY will be highlighting a different taco from one of our many wonderful Mexican restaurants and food trucks throughout Arkansas. This week, we’re taking a look at Baja Grill in the Heights, one of my very favorite spots for non-traditional spins on Cali-Mex cuisine. Also, before I get ahead of myself, congrats to Baja Grill on adding its second location in downtown Benton.

Not many people know that the restaurant actually started out in Benton as a food truck. That is where I tried the Cuban taco for the first time. Comprised of two soft, corn tortillas filled with slow-smoked shredded pork, chipotle aioli, sour orange red cabbage and jicama slaw, fresco cheese, cilantro, and avocado, the Cuban taco is now one of the most popular items on the menu. However, this was not always the case.

“Back in the food truck days, it was going to be taken off the menu due to it rarely being ordered. Then, like, the one guy who ordered it must have told 100 people. The taco suddenly blew up and everyone was asking for it. Now, anything Cuban is the most popular on our menu. The nachos are insane. The Cuban taco is definitely the most popular taco at our Heights location and in the top two at our Benton location,” says co-owner Heather Baber-Roe.

That’s the simple beauty of Baja Grill’s menu. All of their unique ingredient combinations can cross over to burritos, naked burritos (no tortilla), quesadillas, and nachos. As Baber-Roe says, the Cuban nachos are insane, and it stands as my absolute thing on the menu. But this is Taco Tuesday, not Nacho Tuesday.

What makes Baja Grill’s Cuban taco so special? It’s the combination of varying flavors. From the slightly sweet, subtly smokey pulled pork to the tangy cabbage and slaw to the creamy avocado, the Cuban taco really does balance sound execution with imaginative creativity. Ask for a side of acid sauce to ramp up the heat, if that’s your thing.

Either way, hot sauce or no hot sauce, treat yourself this Taco Tuesday to the Cuban taco at either Baja Grill location. You won’t be disappointed.