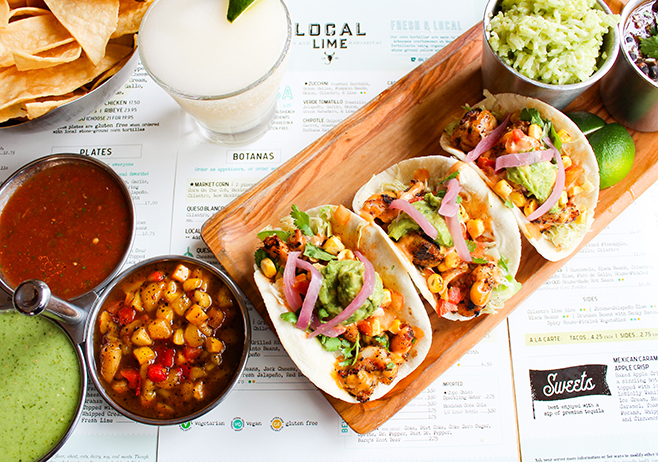 If you haven’t heard, Yellow Rocket Concepts has released yet another round of month specials at participating restaurants. One menu item that caught our eye, on today especially, were the Mexi-Cali Shrimp tacos at Local Lime.

From just looking at the photo of the tacos, it was clear that the flavor would be just as exciting as the colors. Blackened shrimp, lime slaw, Sriracha crema, charred corn pico, avocado, cilantro and lime joined forces for an unforgettable first bite.

The seasoning on the blackened shrimp was savory, and I was tempted to eat the shrimp by itself. That’s not to say that the additional ingredients weren’t complimentary, only that I was that entranced by the flavor of the shrimp.

Inside the soft house-made flour tortillas laid a bed of the lime slaw, and you might think that the mountain of other ingredients would cover up the citrus notes of the slaw, but the slaw really did lay the perfect foundation for the other components to contribute to rather than take away. With the charred corn pico, avocado and onions on top, the vegetables (with the exception of the avocado which is a fruit) showed up for a party.

The drizzle of Sriracha crema had to be my favorite part of the whole shabang. The heat was present but subtle and although I may have had to take a few sips of my drink, I was sopping up the sauce that had dripped out at the end. If I could order a cup of the Sriracha crema, I would.

If this taco is anything to go by, the month of May looks to be a warm one with a clear view into summer. May the fourth be with you and your Taco Tuesday.