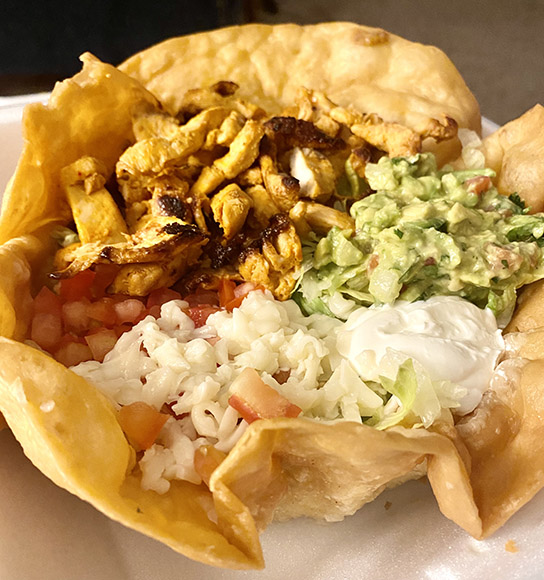 Feeling like you’re eating healthy is nice – even if the “healthy” dish may not be as good for you as you would like to think. A salad is often a safe bet for making good choices, but those salads are also the ones that can hit you the hardest. All the same, as long as the unhealthy healthy food item tastes good, there’s no harm.

The Taco Salad at Tortas Mexico is one of these unsuspecting food items that on paper sounds doctor approved, but in reality it’s the equivalent of around five fully-stuffed tacos. In a bowl-shaped crispy tortilla (beautifully fried golden) refried beans, rice, lettuce, tomato, shredded cheese, sour cream and the choice of either chicken or beef sit waiting for their next victim. Vibrant colors make the salad look as though it were a painting, and with a drizzle of salsa verde, the masterpiece is complete.

The tortilla bowl was probably two and half to three inches deep, and all the different ingredients filled the bowl to the top. Like any true Arkansan, I’m a sucker for fresh flavors. The tomatoes tasted like they had been grown at home and served straight from the garden they were so fresh and the lettuce was still crisp.

The chicken was phenomenal in the seasoning and char taste from the grill. The smell of the grilled chicken combined with the vegetables and aromatic tortilla bowl gave me the feeling of being at a cookout – the perfect setting going into summer.

The magical part of taco salads is the ability to break up the tortilla bowl and turn the meal into nacho. I was pleasantly surprised by the buttery flavor of the tortilla and its ability to support everything that was piled inside. Needless to say, I was more than full by the time I had finished with a few bites to spare.

This taco salad may not have scored me any points in nutrition, but it did make me feel happy and satisfied.