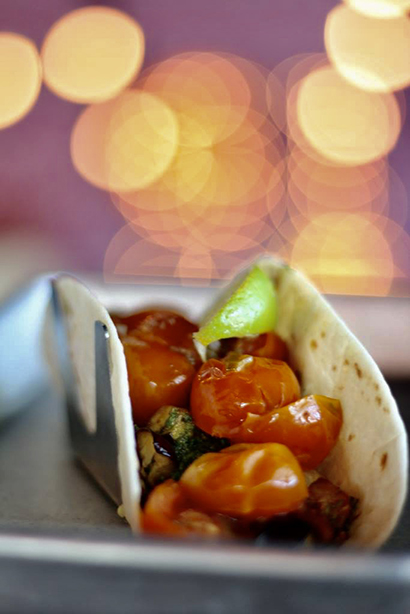 I found myself craving an ice cold fruit punch one freezing night, as most people do, and made my way over to Tacos 4 Life. While I was there, I decided that it would only make sense to grab some food instead of making a trip for Paradise Punch and Paradise Punch alone. While all their tacos are great, the Crispy Eggplant taco caught my eye on this particular chilly evening.

With three-fourths of my juice already drained, I opened up the taco wrapping to a colorful surprise. Ornately filling the top layer of the taco was a line of vibrant cherry tomatoes that had been sauteed. These tomatoes were plump and fragrant with the seasonings they had been cooked in, and peeking through, I could tell that more goodies lie in wait.

Cilantro pesto sauce smothered the fried eggplants in a rich green hue. The sauce carried the scent of citrus and faint faint notes of cilantro –  enough to add more contrast in flavor, but not enough to know there was cilantro unless looking at the ingredients in the taco. This pesto is also used in the side of rice which pairs amazingly well with any taco.

Now comes the main-event: the lightly breaded eggplant. Eggplant in and of itself doesn’t always carry a lot of flavor, but these cubes of vegetable were seasoned and cooked to just the right balance between soft and crunchy. I’m not someone who worries about textures, but I know that other people are wary of certain kinds. I am here to tell you that the lightly fried eggplant, combined with the juicy cherry tomatoes, was absolutely wonderful.

Next time, I think I’ll try it on the puffy tortilla, but only because I’m a fiend for the puff. The flour tortilla did well at holding in the juice of the vegetables and gave a lighter touch to the flavorful ingredients stuffed inside. All three ingredients combined (tomatoes, pesto and eggplant) created a beautiful mixture of natural flavors. The thick pieces of eggplant and the halved cherry tomatoes were filling after one taco, but I, of course, went in for a second.