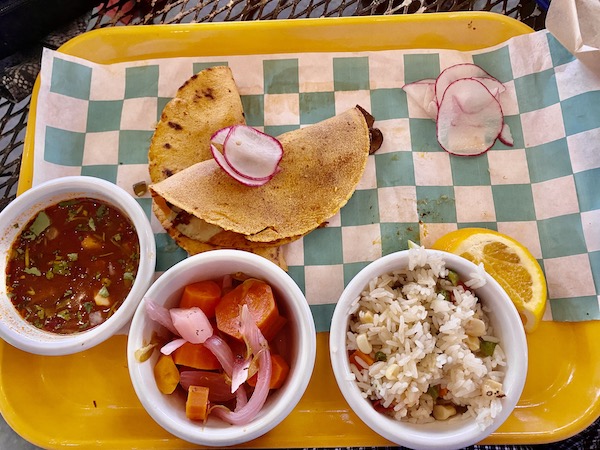 Usually, camp is only a place for the summer holidays, but lucky for us Camp Taco is here for all the seasons. A newer spot in town, Camp Taco is a small-batch brewery project in Little Rock, organized by the folks at Lost Forty Brewing serving the drinks that weren’t available at the camp snack shack. What pairs well with drinks? Tacos, of course.

Before we dive into the tortillas, cheese dip always comes first. The white poblano cheese dip was definitely the star of the show. Served with poblano pepper pico and house chips, the dip was entirely unique. The poblano pepper lent just the right amount of spice, and the chips were flavored with a bit of lime juice that could win its own award.

Giving those veggies some love, I tried the restaurant’s version of a vegan birria taco. This warm taco for a cold day is made with ancho mushrooms, poblano pepper pico and the house vegan cheese dip, all inside a corn tortilla with spicy vegan chili-lime broth to the side.

I’m a big soup person, and who wouldn’t it be in this weather. I took a sip of the broth by itself before I let worlds collide. The broth was indeed spicy as the menu described, but it was not overwhelming. The savory juice could definitely be served by itself as a meal, but once I dipped the taco in there was no going back to broth alone. The flavors in the taco had an almost sweet taste, and combined with the spice of the broth — magic. 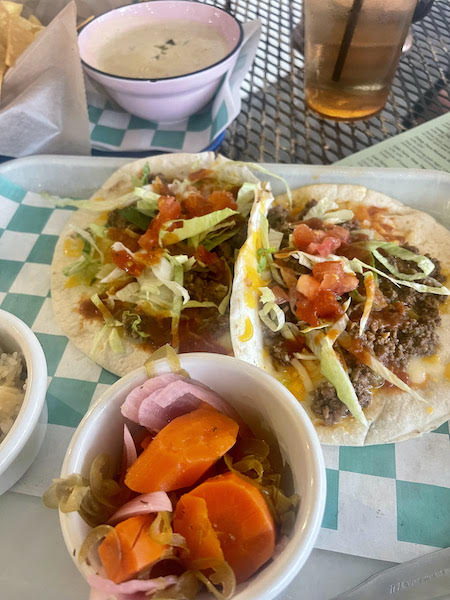 Craving an American classic, I dove into my second taco with the familiar taste of ground beef and diced tomatoes topped with lettuce and shredded cheese. There’s nothing better than a familiar favorite with a twist, and the added flavors of green and red chiles added just the right amount of spice.

No meal is complete without sides, and luckily Camp Taco offers a creative approach to the classics. Rice is a must-have in almost any context with tacos. However, the classic rice with the addition of peas and carrots will leave your mouth watering. Camp is all about adventure, so I branched out in trying a not-so-classic side: pickled carrots. Unexpectedly, the carrots added an indescribable flavor combination that completed the meal.