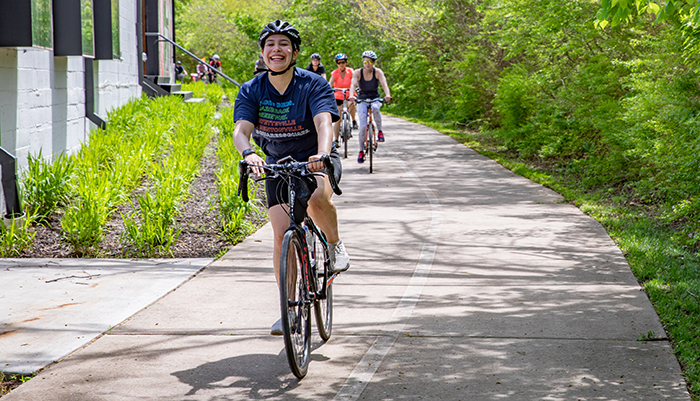 Gathering together as a community is not as simple as it once was a couple of years ago. Large groups in close quarters are a risk not many can gamble amid the precautions the COVID-19 pandemic has put in place, but living in complete isolation indoors is also not an ideal situation. With the health and safety of others in mind, the outdoors have transformed into the perfect event space for this moment in time.

An initiative introduced in 2020, Slow Streets NWA allows for the Northwest Arkansas community to see each other’s smiling faces outside of a computer or phone screen. The outdoors provide clean air, plenty of space to spread out and ample opportunities to bask in the beauty of the region.

“Slow Streets started as a pandemic response back in the spring of 2020,” BikeNWA’s Events Manager Lauren Hildreth says. “This idea was pulled from the initiatives that were happening, not just running around the United States, but also around the globe as an effort to provide more space for people — particularly in urban areas — to be outside and have an outlet for exercise, fresh air and just truly getting outdoors.”

This season’s Slow Streets NWA program will kick off Labor Day weekend in September and continue through the last weekend of October. For each weekend, routes will be marked in Fayetteville, Bentonville and Rogers, indicating where Slow Streets participants can safely walk, cycle, run, scoot or whatever their preferred means of slow transportation may be. 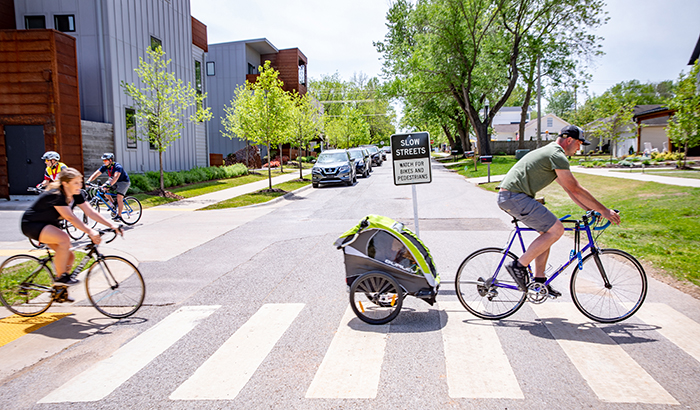 The effort “is an opportunity to try to provide some relief for COVID, get some exercise and maybe explore the city,” Hildreth says. “Once [BikeNWA] had made the first proposal to the different cities, we provided the background information of what other areas are doing and noted that there are things that could be done in Arkansas communities that would make some improvements for quality of life and experiences.

“Anyone driving a vehicle still has access to that space, but we just ask for everyone to watch out for those who are not driving a vehicle — those who might be out riding bikes or walking their dogs with kids. Just keep speeds low and within the speed limit, and then for those who are not driving cars, again, it’s just as important for them to remember that the street isn’t closed to vehicular traffic. Look both ways, look across the street and share the road.”

As the first-of-its-kind in the state of Arkansas, BikeNWA spent a large amount of time organizing this initiative to introduce Arkansans to the life many communities around the country have known for years. Arkansans rely heavily on the use of vehicles for getting from point A to point B, but Slow Streets NWA shows that there is a beneficial alternative. 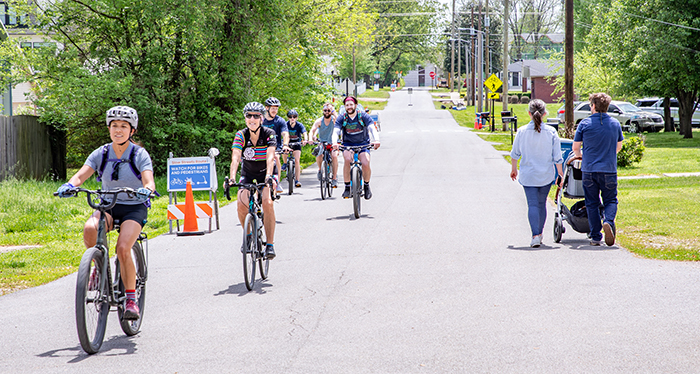 “Slow Streets NWA highlights an opportunity to get outside in [routed] areas and experience what streets could look like, and get the conversation started about how we are using our streets for various activities, such as recreation, transportation and how people are moving around in their neighborhood and in their community,” Hildreth explains. “This is the biggest opportunity that we can use to start that conversation with area residents about what their needs are, how the infrastructure is serving them and possibly what could be improved.”

This sector of the state is well-known for its mix of natural and urban life and the rich cultural experiences that set the Northwest communities apart from others in Arkansas. However, this initiative can be put in place relatively anywhere in the state. With the help of the right people, interest and community involvement, “Slow Streets” can become a statewide program.

“If people are interested in doing this in their neighborhood or in their communities, we have resources to share, including a webinar [from] back at the beginning of this year pulling together some people from across the country that did this type of program,” Hildreth shares. “There is lots of information to help get people started on the program that I think we’d all love to see continued.”

Along with BikeNWA’s resources to get other communities started, Hildreth says that it would not be possible without the assistance of cities’ transportation and traffic departments, city councils and city leaders.

“City councils, for example, are there to advocate for their residents and constituents, as well as try to find opportunities for these kinds of programs,” Hildreth explains.

The future of Slow Streets can go in many different directions, depending on the outcome of the next year, the pandemic and the community. With so many possibilities, there is plenty of time to look forward to how it can continue to evolve. 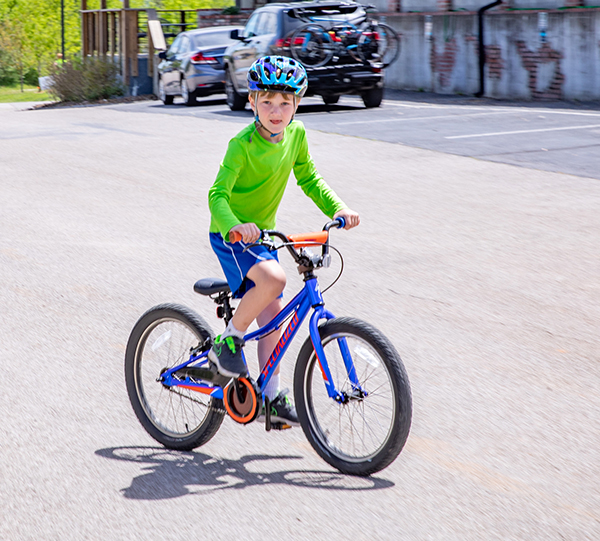 From enthusiasts to adolescents, anyone can take part in Slow Streets.

“The pandemic has evolved, and it’s impacting our communities and our daily lives, and this program has evolved along with it,” Hildreth says. “We used to do a program called Open Streets, which was more of an event.”

Open Streets, she says, was a one-day program that pulled people outside and made them reimagine what the “streets” could be. She thinks that this is something that could be incorporated into Slow Streets in the future.

“[We] would like to do more small activities and continue to identify the needs and concerns of particular neighborhoods and spaces within the community,” she says. “Hopefully, we’ll continue to see more of this program continued for years.”

BikeNWA may have organized the initiative, but it’s the people who are meant to bring Slow Streets to its full potential. The clean air of the Natural State is begging for people to get out and enjoy the sunshine — and maybe wave at some neighbors along the way.

Hildreth says that the residents “are really the ones leading the charge here, and hopefully they can find more ways to feel empowered, to advocate for the needs of their neighborhood, their streets or their communities. This is a gateway in that we want people to be engaged and communicating with their city leaders and decision-makers, and we hope to create a little bit of a channel for that.” She adds that residents “are welcome to reach back to us with locations and ideas and ways that they’d like to see incorporated. [BikeNWA] is willing to try to work with different people on the ways that work best for them.”