At the moment, it’s nearly impossible to walk smoothly through The Thea Foundation’s heavy glass doors without doing a double take. The current exhibit put on through the Art Department series, “Curiosity Revealed,” features over twenty-two larger than life pieces, which beg closer inspection.

Sandra Sell, the sculptor behind the exhibit, sees the show as a map of sorts into her journey as an artist. 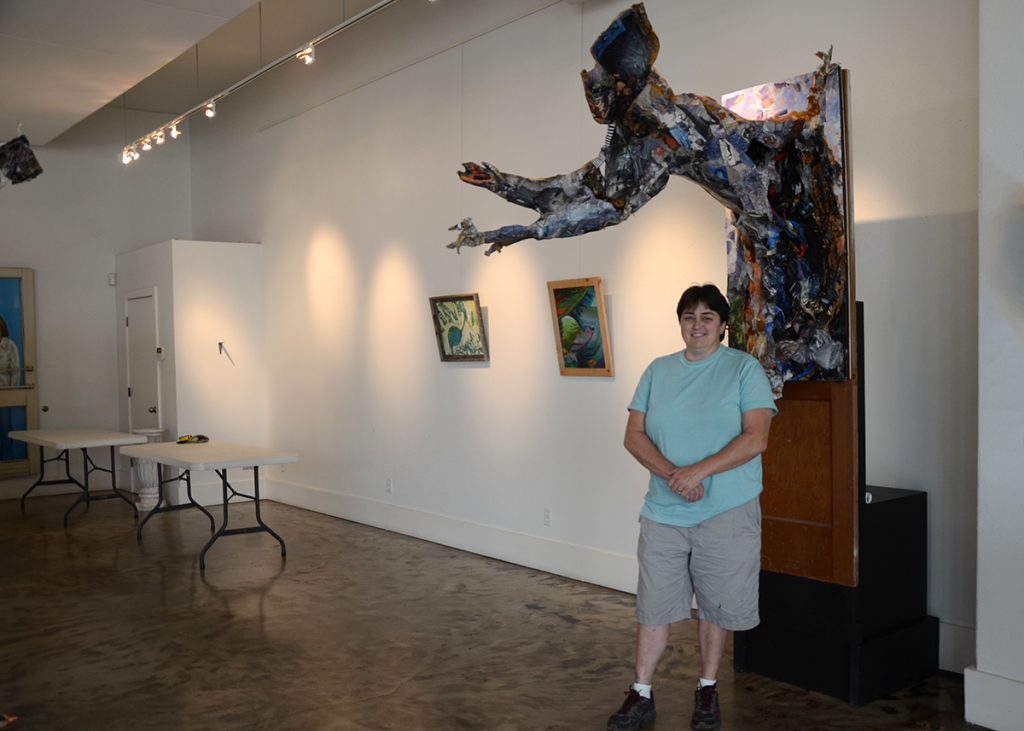 Sell knew from a young age that she wanted to be an artist, as she says, “I was really a shy kid … I just kept going to school until I got better at reading and writing and then I said, ‘Ok, now I can go to art school.’”

Pursuing art was something she always had in the back of her mind, even when she enlisted in the Army. “I didn’t want to have to sell my artwork to survive,” she explains, but all the while her goal to continue follow her passion stayed alive.

Once she finished her service, she landed in Arkansas and began attending the University of Arkansas at Little Rock for her undergraduate studies. During this time she took an advanced drawing class with Catherine Siri Nugent, who opened Sell to a new way of approaching her work.

“I was doing paintings and landscapes, and [Catherine] said, ‘Great you can do it. You can paint a landscape, now … do something that makes it your own.’ She challenged me to think outside what I was already doing,” explains Sell.

This guiding principle helped Sell take her work to the next level. 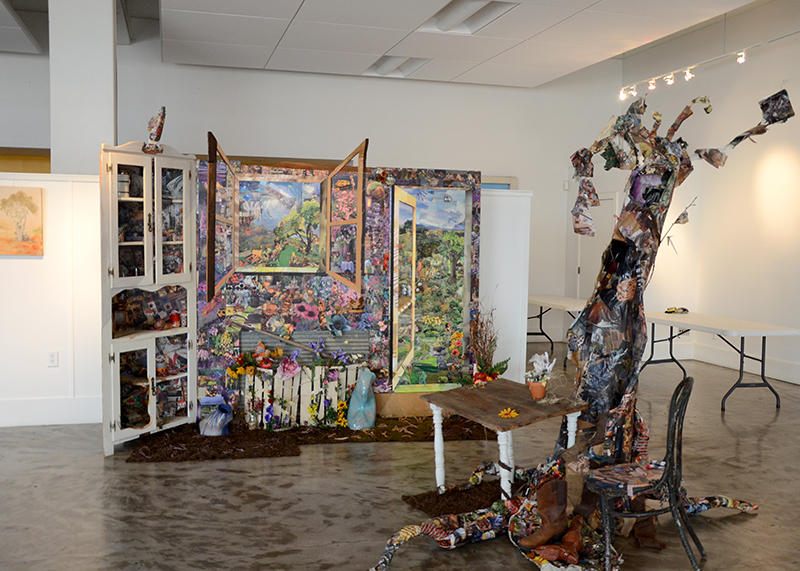 One particular piece titled Inside/Outside marks a distinct starting point for “Curiosity Revealed.” An ode to her grandmother, Sell remembers admiring her grandmother’s endless plants growing up, and wanted to commend that.

As the viewer you can’t get over the perspective of the piece – are you inside or outside? Sell uses a variety of materials – magazine clippings, cloth, wood and much more – all with extreme attention to detail.

Sell continues, “This pieces produces a sort of trompe l’oeil affect. You’re looking at it and you don’t know if it’s the image or if it’s real.”

The show also includes a few of Sell’s paintings, ranging from two-dimensional to what she calls “dimensional paintings.” One examines her childhood remembrance of building forts, of protecting herself from the fear and unknown harbored in the darkness. One side of the piece opens a portal into a young child’s mind of how strong her blanket fort is, but moving to the other side, you see the fort as an adult might – a bit makeshift and flimsy.

From there, you can easily get lost in Sell’s numerous tree sculptures produced from a variety of materials. She created two silvery trees out of recycled materials which are hauntingly beautiful. Sells says, “I was trying to figure out how I could make a statement about our throwaway life – what we’re asking nature to take care of for us. That’s how these can trees came about.” 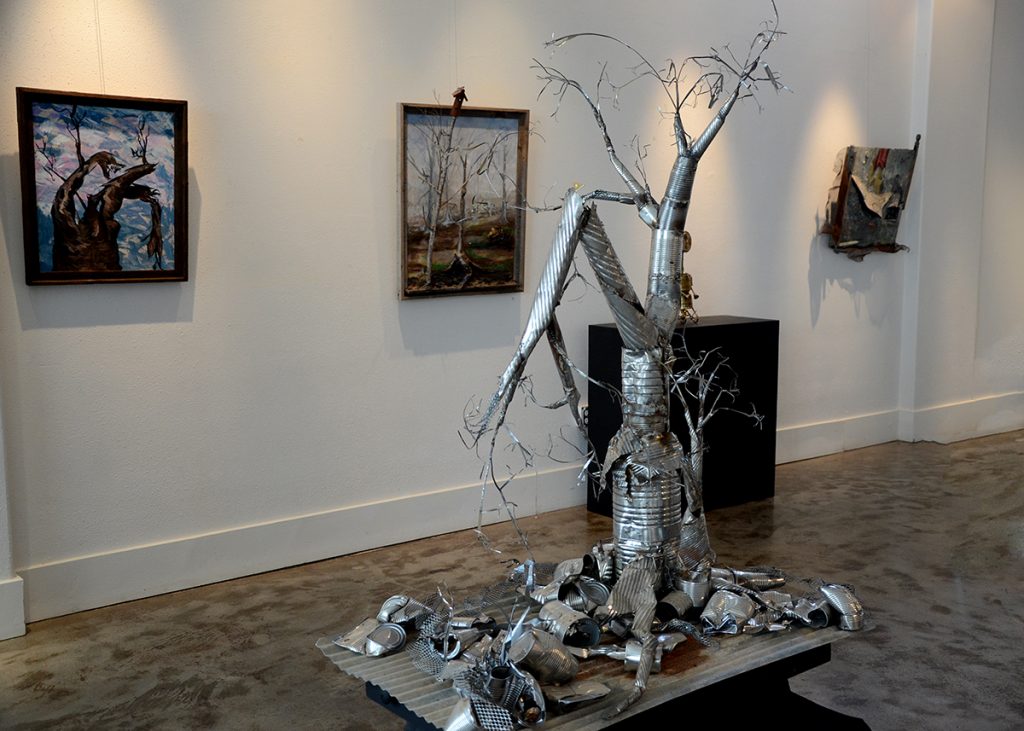 Can Tree I by Sandra Sell

The Chair Tree Sculpture on the other hand, is made from a multitude of wooden chairs in various styles, although it approaches the same issue. Sell continues, “We just kind of throw chairs to the curb when we’re done with them and that’s where a lot of these came from.”

The piece includes a video, which continues examining nature as a subject, but along the lines of lineage and ancestry. 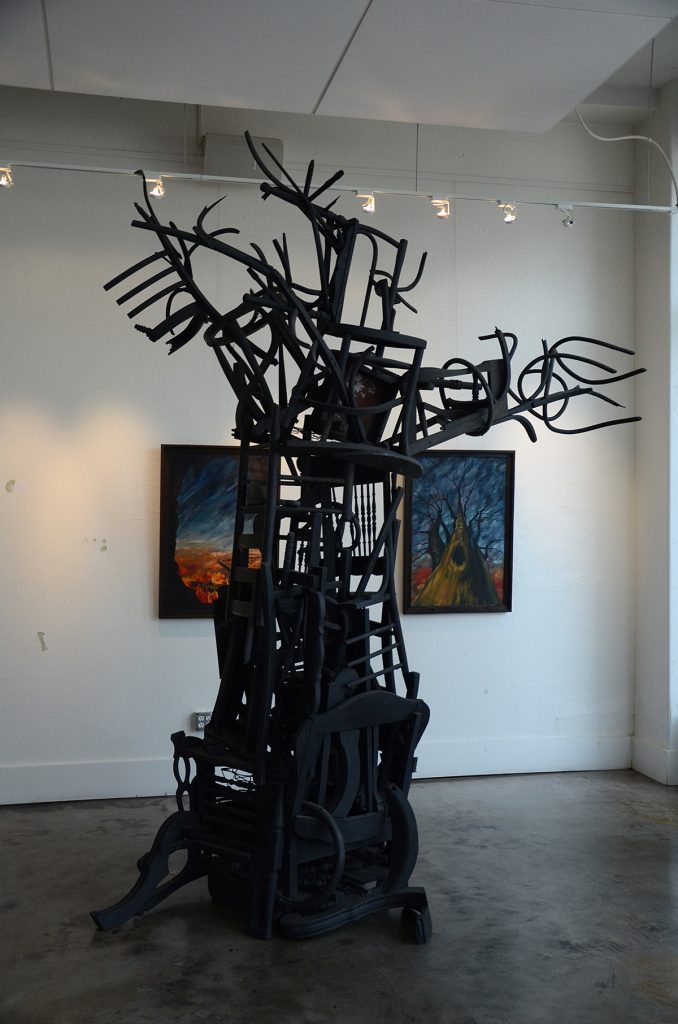 Sell is particularly excited to have “Curiosity Revealed” shown at Thea. She says, “I like what Thea does. I have been aware of [them] since I have been coming to Little Rock. I love the space, and I thought that it would be perfect. … I really want to get this show in front of students. I really hope it inspires them.”

This preview can’t even begin to describe each of Sell’s pieces in detail. In fact, “Curiosity Revealed” is worth more than one visit, and what better way to do that than with the opening reception this Friday, Aug. 5, from 6:30 to 9:00 p.m. at the Thea Foundation’s location on 401 Main Street. For $10 at the door you’ll get heavy hors d’oeuvres provided by Ben E. Keith as well as access to an open beer and wine. There will be live music by Bonnie Montgomery and a chance to win a piece of work by Sell.