It’s no secret that Arkansas is known for its abundant rivers, lakes, streams and mountains. Yet, the trails and routes that transport Arkansans and visitors alike to these natural resources tell a story of their own. Nowhere is this more evident than in Arkansas’s historic bridges, which span geographic and manmade features such as waterways, busy railroad tracks or bustling highways. These bridges illustrate the history and heritage of The Natural State—and can lead to modern-day discoveries of their own. 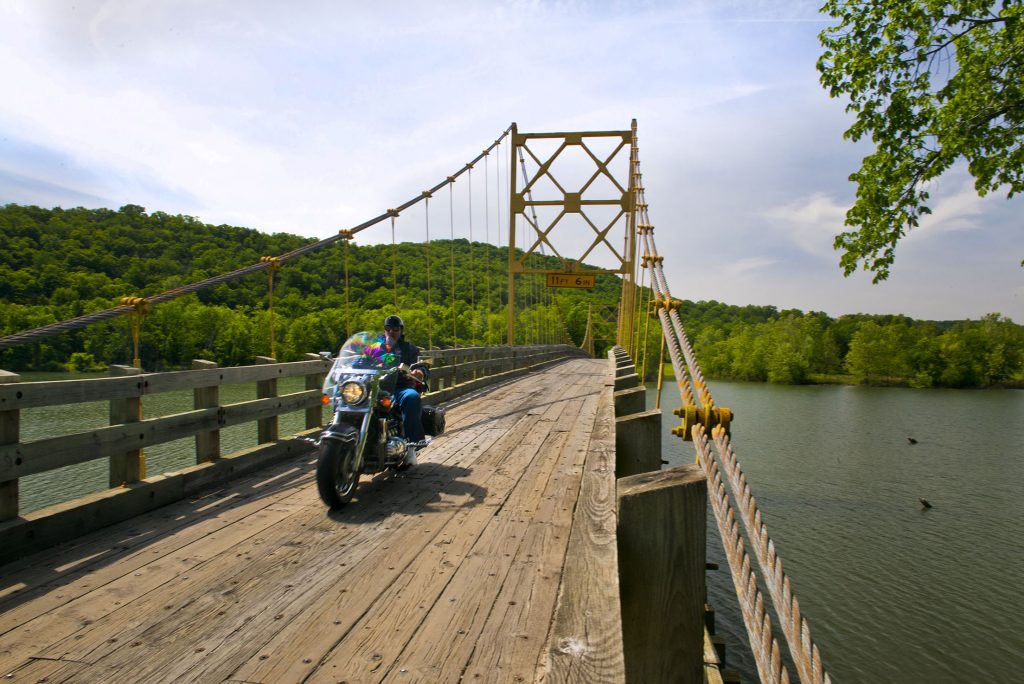 The Beaver Bridge near Eureka Springs

Cotter, once the largest town in North Arkansas, is today a well-known river town offering excellent trout fishing amid incredible scenery. In addition to the sparkling water of the White River, another visible charm is the R. M. Ruthven Rainbow Arch Bridge, originally dedicated in 1930 and renovated in 2004. The largest Marsh Rainbow Arch Bridge known to exist today, it is on the National Register of Historic Places. The reinforced-concrete rainbow arch design was patented by James Marsh in 1912. This five-arch span was a major factor in the development of transportation in North Central Arkansas. Hiking, shopping, festivals, canoeing and kayaking are other popular pastimes. Cotter’s historic downtown area contains restored buildings, and gift and antique shops. The city has 31 historical markers on its buildings and landmarks.

Built in 1949 by the Pioneer Construction Company of Malvern, Beaver Bridge, a one-lane, wooden and wire-cable suspension bridge, spans the White River and is listed on the National Register of Historic Places. The bridge is also referred to as the “Little Golden Gate” or the “Golden Gate of the Ozarks.” This historic suspension bridge is the last one in Arkansas open to vehicular traffic. The structure was featured in the 2005 movie “Elizabethtown.” It’s located in Northwest Arkansas in the town of Beaver, 11 miles from the popular Victorian town of Eureka Springs. The bridge is on Ark. 187, which runs from Ark. 23 to U.S. 62 between Holiday Island and Rogers. This scenic route is popular with motorcycle and car clubs, and residents and visitors out for a “Sunday drive.” The trailhead for the scenic Beaver Trail is located by the bridge. At .31 miles round trip, the hike is classified as easy, is well-maintained and takes approximately a half hour. 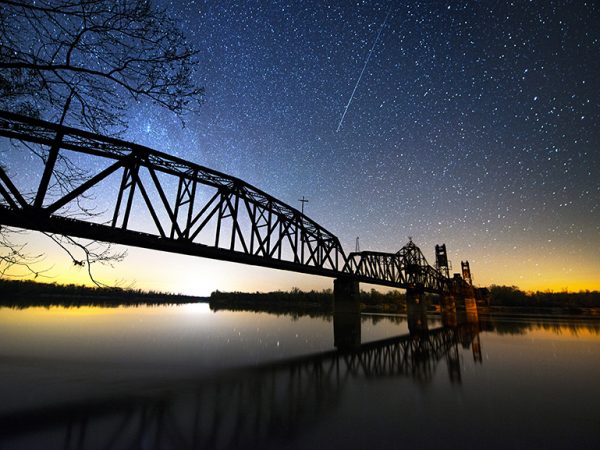 The Yancopin Bridge near Watson

The Yancopin Bridge near Watson is the last bridge along the Arkansas River before it meets the Mighty Mississippi. Built in the first decade of the 1900s, the bridge is a distinctive size and has two movable spans. After nearly a century of use, Union Pacific Railroad took the bridge out of service in 1992 and donated the bridge, as well as a 73-mile right-of-way, to the State of Arkansas, allowing the creation of the Delta Heritage Trail State Park. Legendary writer Ernest Hemingway, who spent time in Arkansas while married to his second wife, Pauline, visited the Yancopin area to duck hunt in Dec. 1932. Nearby is the Rohwer Relocation Center in Rohwer and the World War II Japanese American Internment Museum in McGehee. Looking for a great getaway in the area? Check out the Delta Resort & Spa near McGehee.

The Harahan Bridge, opened in 1916, spans the Mighty Mississippi River and for nearly 30 years connected West Memphis and Memphis. The structure features two railways and two roadways built off the side of the main bridge structure. The bridge was used for vehicle traffic until 1949, when the nearby Memphis-Arkansas Memorial Bridge (or now known by locals as “The Old Bridge”) was opened. But the Harahan Bridge will have a new life beginning within the next few years, as the bridge opens up to bicycle and pedestrian traffic, allowing spectacular views of the Mississippi River and, once again, connecting the downtowns of West Memphis and Memphis. Visitors will find rip-roaring fun at the nearby Riverside International Speedway in West Memphis. Opened in 1949, Riverside International Speedway is the oldest continually operated dirt track in Arkansas, and one of the oldest in the United States. Or head to Southland Park Gaming and Racing and watch the graceful greyhounds run for the finish line. Love music? Don’t miss a visit to the historic KWEM Radio, now broadcasting from the Mid-South Community College campus. And you’ll definitely want to plan a trip to Dyess for a visit to the Historic Dyess Colony: Johnny Cash Boyhood Home.

The Ben Laney Bridge in Camden was built in the mid 1940s to carry traffic on Highway 79 across the Ouachita River. The steel Pratt truss bridge was originally constructed to accommodate an increase in car traffic on the highway. The bridge is named for former Arkansas Governor Benjamin Travis Laney. Laney was a Camden native and also once served as mayor of the town. In the early 1970s a new stretch of Highway 79 with a four-lane bridge bypassed the Laney Bridge, but it is still in use for local traffic on 79 B. The bridge was added to the National Register of Historic Places in 2000.

The Arkansas Highway 57 Bridge in Stephens is a pony truss bridge that was built in the late 1920s. The bridge, located around 30 minutes from Camden, is notable for having a pedestrian sidewalk. It is now closed to traffic but once carried the highway over a track of the Union Pacific Railroad in the center of town. According to the form used to nominate the bridge to the National Register, “the bridge is the only known example of a Warren pony truss with a polygonal top chord used on a state highway in Arkansas.” It was added to the National Register of Historic Places in 2005.

Camden is a city rich in history. Along with historic bridges, visitors can find out more about the town’s colorful past at the Camden Visitors Center and Museum, which is located at 314 Adams Street at the Missouri-Pacific Depot, a restored historic train depot from the early 1900s. This property is also on the National Register of Historic Places. Here you can find information on the town’s Civil War and railroad history, as well as artifacts that relate to famous Camden products like Camark pottery and Grapette soft drinks. Those interested in local history can also visit the McCollum-Chidester House, which was built in the late 1840s and now serves as a museum. It is located at 925 Washington Street and was featured in the series “North and South.” For more history, Poison Springs Battleground State Park is nearby, which preserves the site of a Civil War battle. 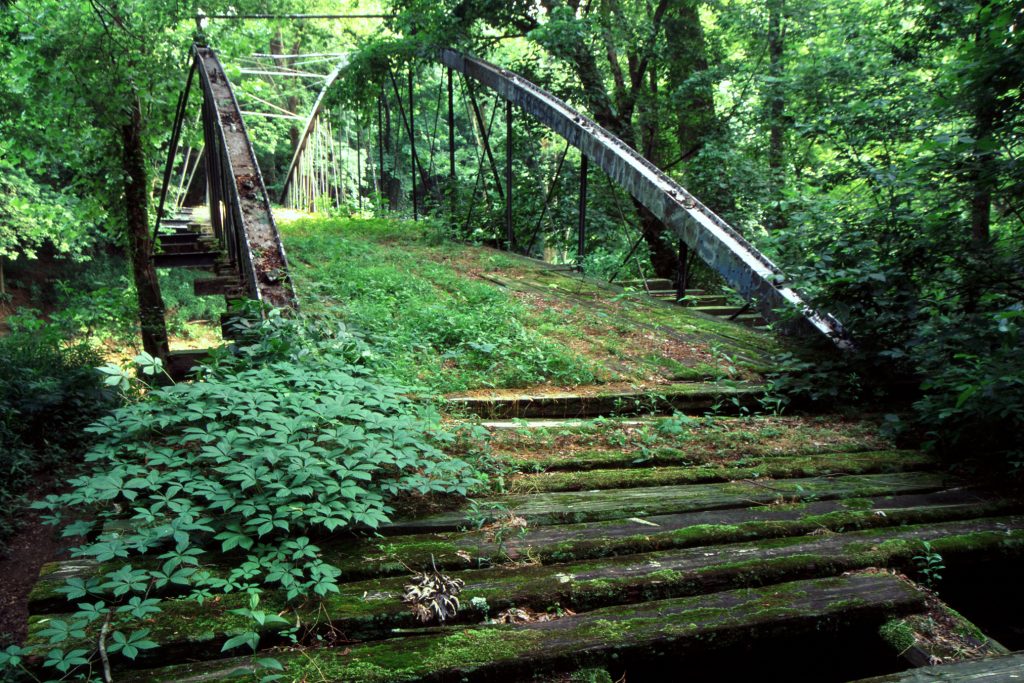 The Springfield-Des Arc Bridge, situated at the Conway-Faulkner county line spanning the north branch of Cadron Creek, was part of an important trade route between the then-Conway County seat of Springfield and the steamboat landing in Des Arc. Before the bridge was completed in 1874, the creek had been crossed by ferry. This iron truss through bridge with tubular arches was engineered by Zenas King, who would become one of the 19th century’s most important bridge builders. Closed to vehicular traffic and bypassed in the late 1980s, the bridge was named by the Historic Preservation Alliance of Arkansas to its “Eight Most Endangered Places” list. As the oldest standing bridge in Arkansas, one of only two remaining iron bowstring through truss bridges in the state (the other, built in 1880 in Danville, now stands as a sort of sculpture on the City Hall property), and the second-oldest bridge of its type in the country, it’s worth carefully picking your way through the woods to get a glimpse of this treasure.

The Edgemere Street and Lakeshore Drive bridges are stone-arch bridges on Lakewood Lake No. 3 in North Little Rock. Built in 1926 and 1939, respectively, these bridges exemplify a type of stonework—sometimes referred to as “giraffe masonry” because its irregularly sized rust-brown stones and white mortar resemble a giraffe’s hide—that is a hallmark of the area. Founded in 1908 by Justin Matthews, the Metropolitan Trust Company created North Little Rock’s Park Hill and Lakewood subdivisions; their most nationally recognized project is the Old Mill, which appeared in the opening scene of “Gone with the Wind.” Edgemere and Lakeshore, along with two other Lakewood stone bridges as well as the Old Mill, were all designed by MTC architect Frank Carmean, who also designed several homes in the area.

Completed in 1941, the Fourche Lafave River Bridge, on Highway 7 in Perry County, close to Nimrod, is one of 12 reinforced concrete arch bridges in Arkansas made from designs by Daniel B Luten, a pioneer in the construction of that type of bridge. As automobile ownership increased in the first half of the 20th century, so did the demand for improved roads; this type of construction became prevalent at the time. The art of combining concrete with bendable iron rods (as opposed to solid concrete) meant that bridges could be lighter and more cost-effective; it also meant that they could be decorative in new ways. The Fourche Lafave exemplifies this with its graceful open spandrels and art deco detailing.