Taking a Break: Slowing Down Your Life 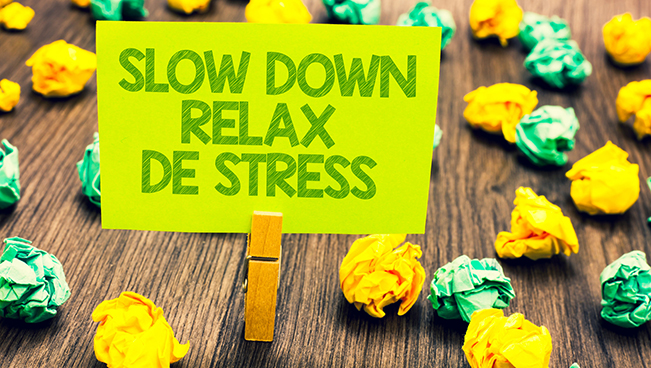 I was overworked, working up to 90 hours a week at times. My body hurt, I’d lost two babies; I was barely getting wholesome time with my family even though I desperately tried to make every second count. My husband was constantly at work or in work mode. I felt guilty for sitting still, and my heart hurt every time I had to say “no” to family gatherings. I didn’t know the last time I’d picked up the phone to call my grandmother, my only surviving grandparent, or my family that lives so far away in Pakistan. But everyone had told me that the way to “make it” was to hustle and work hard.

Well, I was hustling, and I was no stranger to working hard. I was working harder than I could remember yet I was suffering so much and in silence. Nothing was coming together; I was losing money because I simply didn’t have time to look at how I was spending. I was losing friends because I was too exhausted to explain what I was going through and feeling. It was easier to post online than a real conversation because I could post and walk away but real conversations depleted me. I was exhausted. I didn’t want to talk to anyone. I didn’t want pity; I just wanted it to stop.

I remember the exact moment I prayed for it to stop. I have always been an outsider looking in when it comes to the world. Not much affects me as far as influence goes because I like to believe I march to the beat of my own drum, but my internal compass was dying because the pressures of the world were consuming me, and I could feel it getting tighter. I remember actually praying the words out loud, “Make this insanity stop. This doesn’t make sense”.

I decided I would take a break from the world. With my hustle-colored glasses off, I was looking at the world so differently. I noticed that everything looked generic. Everyone was liking the same things, talking the same way, doing the same things, and expecting the same things. I felt myself come alive again after noticing what a generic path I had been on. A path that was carved out for me and millions like me. This was insanity. The outside world forced us on this path because it was not giving us any alternatives. But something in me woke up.

I quit everything because it was taking a physical and emotional toll on me and I felt like I was spinning my wheels. I didn’t put my kids in any extra sports because family time was more important in my opinion (I didn’t want overworked stressed-out kids). Our cumulative stresses lessened. We played more games and cooked together. We found charities and people we wanted to help. We noticed all the helpers. We became helpers. We finally welcomed our healthy rainbow baby to the family. I spoke out more in the hopes of getting my message out. I was sure others felt like I did, and I didn’t want them to feel alone. But I was new at my way of life and it looked and sounded clunky. It wasn’t a clean and graceful break from the real world but it was always well intentioned. It didn’t always make sense to others looking in at me. It looked like nonsense or talking too much or posting too much or erratic social media behavior. It didn’t look like the generic posts and it didn’t look ‘normal’. People trained in normalcy would typically distance themselves from people who spoke out like I did. But I know my intentions were very pure.

So for the last two years, I’ve been living a different life. I’ve been a master at saying “no” to things that do not serve my soul. I’ve been slowing down and taking care of myself and children. I address issues head-on. I’ve simplified life as much as I can. I’ve been working hard to be a present family member. And, I’ve spoken out more times than I can count in order to help someone else because at the end of the day, I think that’s why we’re really here. But I knew the world wasn’t changing despite my personal beliefs. Others were still stuck on that unhappy path. I couldn’t scream loud enough to help others.

Then the quarantine happened, and everything I had wished for came true. It came at a significant expense but it came true.

We are all at home now. Our everyday heroes are revered and getting the recognition they deserve. People are connecting through kind acts whether cooking meals for one another or donating money. Groups are forming left and right to advocate for people who are suffering inequities of any kind. The planet is trying to heal from our presence. People are speaking out about their own experiences through creative outlets. Personally, my kids and husband are home. And, lastly, the glorification of being busy is nonexistent.  These are all the positives from what I’d wished for; this is the new normal I wanted so desperately, but there’s always an underbelly to even good wishes.

Currently, there are people suffering through financial hardships; people struggling with having to be a homeschool teacher and parent or single parent; others are fighting for their health or the health of a loved one; others suffering physical abuse at the hands of a house member, yet others facing the loneliest time in isolation. A global change like this is sure to bring a plethora of problems. This is the normal I don’t want to see again. But I am not devastated because I believe in the good and have seen it.

If you are one of the people suffering through a hardship, know that there are kind, good-intentioned people all around us who want to see you make it through to the other side safely. These helpers may post or talk differently than you’re used to; they may share too much on social media; they might not keep as much to themselves as you’d like. But know that there are pure-hearted people who have weathered plenty of storms who now aim to help you. This is the time to break away from the normal you knew and speak up and reach out for the things you need. This world will heal because of the good people working tirelessly for the good of others.

In the coming weeks, you might just be catching a lot of people leaving the generic paths created for them and let me remind you, it looks and sounds clunky. Don’t ignore the clunky sounds because that’s exactly what the “normal” world wants you to do. Give people the benefit of the doubt that they’re going through something authentic and defining. In addition, create your own sound to speak up and reach out for what you need. Don’t fall back into the soul-eating parts of normalcy; those parts churn out more problems than we can handle.

After the quarantine is over, I will continue my way of living because I saw the horrible problems it caused within families, on health (mental and physical), on finances, and on the environment; it was not suitable for our happiness. And after doing it for more than two years, I see the pressures it puts on so many others. I don’t want to return to “normal.”That “normal” was broken. It was breaking a lot of us. I look forward to a new normal where we continue our kind acts, where we continue reaching out to people, where we continue giving respect to everyday heroes who work so tirelessly, and where we slow down to appreciate the things that give us life instead of things that strip life from us. As different as we seem, we are all in this together, and we will make it through because people who weathered storms will lift you out of yours; just reach out.