A Tale of Two Cities… Sort Of 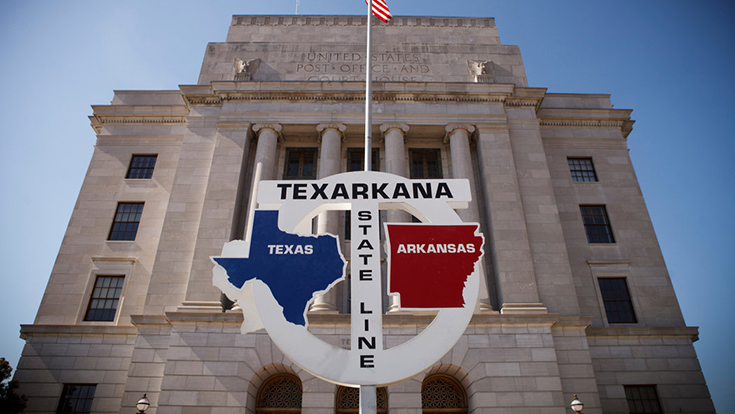 by Curtis Lanning
Arkansas and Texas have a number of rivalries in football, cheese dip, etc. But there’s one thing they share: Texarkana.
Though technically two cities, the shared area sits right on the Arkansas and Texas border in the far southwest corner of The Natural State.
For Texarkana, two cities doesn’t mean anything is cut in half. Rather, it results in double the restaurants, double the outdoor activities and double the culture.
Ina McDowell is executive director of Main Street Texarkana. She said the area has around 70,000 people.
“We draw from such a large area,” she said. “There’s always something going on.”
When it comes to restaurants, McDowell said Texarkana offers something for everyone. But especially when it comes to Tex-Mex. Zapata’s is one of the longest-running Tex-Mex restaurants in town, and it’s a local favorite, according to McDowell.
For barbecue fans, there’s Big Jake’s. Burgers? Try TLC or Reggie’s, McDowell said.
“People love their food,” she said.
Craft breweries are popping up across Arkansas and Texas, and McDowell said Pecan Point has been in Texarkana for about four years. They took a historic building and “made it work,” according to the executive director.
With summer arriving, McDowell said the Texarkana area has a number of great parks, including a recently redone Spring Lake Park, a water park, and a new skate park downtown. Second Saturday, an event that takes place on the second Saturday of every month during the season, is another popular event for the community that offers people a chance to see local art, try new food and listen to live music.
If kids are looking for fun activities this summer, the Discovery Place Children’s Museum offers art classes and camps, and Texarkana College offers a drama camp, McDowell said.
It doesn’t matter what state visitors find themselves in, McDowell said, “There are good things on both sides.”
“People around here aren’t that divisive,” she said.
In fact, one of the most popular activities for tourists is to visit the State Line Post Office and have their picture taken. It sits right on the Texas and Arkansas line.
An event called Dine on the Line brings both cities together with tables literally put down the state line. Then people eat in both Texas and Arkansas, according to McDowell.
Texarkana residents also have access to plenty of shopping with local stores and boutiques.
“I don’t see our shopping as lacking in any way,” McDowell said.
Both towns offer everything from bridal shops to furniture stores.
“You can get what you want here,” McDowell said.
And, if people do want to head out of town and visit a big city, Mike Malone, president and CEO of the Texarkana Chamber of Commerce, said there are plenty of nearby options. Thanks to easy transportation access with multiple interstate systems, Dallas, Shreveport and Little Rock can all be reached within a couple hours of driving.
Live music venues are another thing Texarkana isn’t short on, according to McDowell.
One of the most popular is Twisted Fork.
“It’s very popular for live music,” McDowell said.
Other venues for live music include Hopkins Icehouse, Scottie’s Grill and Silver Star.
“On any given night, you can find a place with live music,” McDowell said.
The arts are another aspect of Texarkana residents can and do take advantage of, the executive director said.
“The artists in our community blow you away,” McDowell said.
She described the art scene in Texarkana as “very strong” and said the downtown area has a number of studios where local art is on display. Residents and visitors can also catch a performance at the Perot Theatre. McDowell said Texarkana also has an outstanding symphony orchestra.
For those thinking of moving to Texarkana (either in Texas or Arkansas), McDowell said it’s a safe place for families to raise their children. She’s raised three children in Texarkana and said her family felt secure.
“I feel very safe,” she said. “Most residents do.”
If there’s one thing McDowell said people may want more of in Texarkana, it’s fresh grocery options.
More and more people are wanting options for fresh eating and a healthy lifestyle, she said.
One option for residents? Texarkana has a couple different farmers markets. According to McDowell, they all do really well and are often sold out before the afternoon.
As for healthy lifestyle offerings, McDowell said plans are in the works for a number of walking paths and bike lanes throughout the area.
For more information on local hotspots and fun things to do in Texarkana, check out the city guide here.