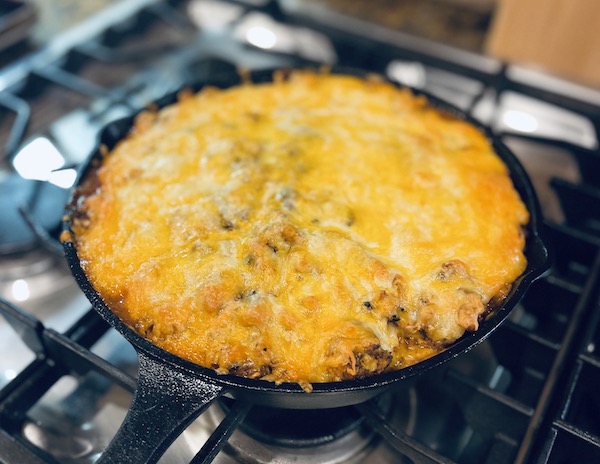 I haven’t always been known around my house as being the resident chef, per se. My daughter, Savvy, has always filled those shoes. But lately, I’ve been getting into the kitchen more, and this Tamale Pie Recipe had everyone coming back for seconds this week.

Meanwhile, in a large skillet over medium heat, heat oil. Add onion and cook until soft, 5 minutes, then add garlic and cook until fragrant, 1 minute more. Add taco seasoning and season with salt. Add chicken and 1⁄2 cup enchilada sauce, and stir until combined.

Poke holes all over cornbread with the bottom of a wooden spoon. Pour remaining 1⁄4 cup enchilada sauce over poked holes and top with chicken mixture.

Top with both cheeses, and bake for 20 more minutes.

Garnish with cilantro before serving.