A Taste of France in Arkansas: Bentonville’s Crêpes Paulette 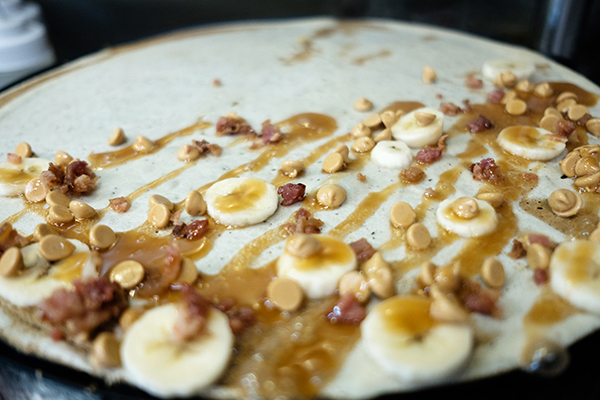 Who could have guessed that a glass of spilled champagne would lead to a popular Bentonville restaurant?
In 1995, Arkansas native and aspiring actress Paula Jo Chitty was living in New York City waiting outside an open air concert, when she spilled her glass of champagne on Frédéric Henry.
He was a Frenchman newly arrived in America. It got his attention and to this day, “Fred” says it was on purpose, but no matter – the story has become legend.  Like many actresses, Paula worked in the food industry, and Frédéric soon began managing a restaurant.
They dated, eventually married and spent five years in Paris, then in 2005, moved to Bentonville where Paula went to high school. 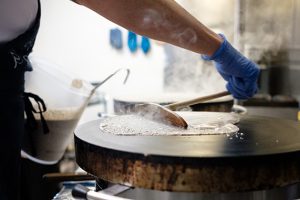 In 2009, they decided to open a restaurant serving French crepes.
“No banks would lend us the money,” says Paula. “In retrospect, it wasn’t a bad thing. It made us pull in our apron strings and work on a tight budget. It was good we didn’t launch into a restaurant because we figured it out as we went along.
In 2010, they opened Crêpes Paulette, a food truck, on the Bentonville Square. Crepes were a niche that had not been filled in the market. The Henrys did not know how the concept would be received, but it was a hit.
“We originally only sold sweet crepes in the food truck because we assumed it would be more approachable for people. We weren’t at all sure when we moved to buckwheat crepes if it would fly.  Now, buckwheat is on par if not overtaken the sweet sales,” says Paula. 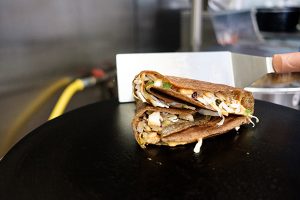 They were slammed all the time. And something unexpected happened. The plan was to switch cooking every hour, but the first hour they were so busy, and Paula said she had learned so much that if they switched, Frédéric would have to catch up and they’d lose customers, so Paula became the cook and that remains her role. Frédéric works the front of the house and handles customers.
By 2016, they were ready to move into brick and mortar.
They opened a second Crêpes Paulette where they serve sweet and savory fusion crepes. Popular dishes include Nutella and banana, as well as the spicy Thai chicken. There are gluten-free options, and plenty of vegetarian choices. They serve wine and mimosas, and recently added a tap with local beer and cider. 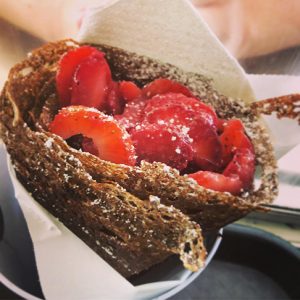 When the Henrys opened the restaurant, they didn’t want to stray too far from the food truck so they strive for a casual atmosphere.
“We have a lighthearted feel in the restaurant. The crepe making is visible at the restaurant like the food truck. We have artificial grass on some benches. We have sunny old French art, industrial feel. Nothing fancy at all,” she says.
They still operate the food truck although it has limited winter hours. 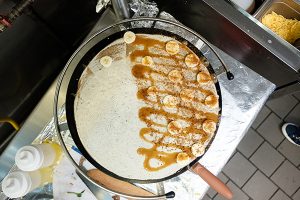 At the restaurant, they are stewards of the environment and keep food waste to a minimum and are avid recyclers.
They serve lunch on weekdays and brunch on weekends. Currently, they open at 10 a.m. but are considering an earlier start during the week to capture the breakfast crowd.
Diners love the crepes. Aside from staying busy, the restaurant garners 4.5-5 stars ratings on a variety of websites. They have a loyal local clientele, but the good reviews pull in a lot of tourists, Paula says. 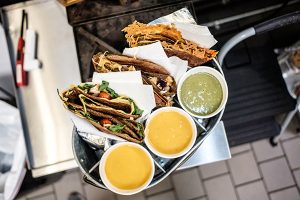 The name Crêpes Paulette was derived from two concepts: one, Crêpes Suzette is probably the most famous crepe for most Americans so it would resonate with diners, and while living in France, Fred’s friends called Paula “Paulette.”
“Plus, Crêpes Fred isn’t as cute,” she says. 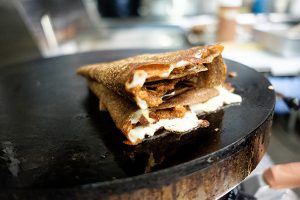