An Explosion of Fun: Tasting the Sixth Birthday Cake 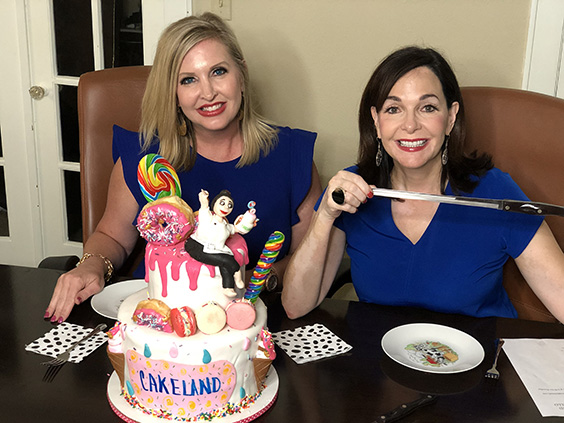 There’s cakes, and then there are CAKES. The newest contender in the “Heather and Lisa Eat Cake Because It’s Heather’s Birthday” contest definitely falls in the latter category.

Hailing from Cakeland bakery in Monticello, this cake is composed of two tiers, and decorated with a range of edible goodies, from donuts to macaroons to lollipops. AY Publisher Heather Baker is blown away from the level of detail in the cake.

“I walked in…and I was like, ‘Happy Birthday to me,’” Baker says. “This is amazing. Everything on here is edible – the doughnuts, the chocolate on the cones, the macaroons.”

That impressive level of detail carries over to the interior of the cake, too.

“Didn’t she [the baker] ask you what you like,” AY Editor-at-Large Lisa Fischer asks.

She definitely did, flavoring the bottom tier with one of Baker’s favorite candies – Twix. “The bottom is chocolate cake with Twix buttercream with chocolate ganache and caramel,” Fischer says. ““The cake is coffee cake with coffee buttercream and all fondant done by hand…” 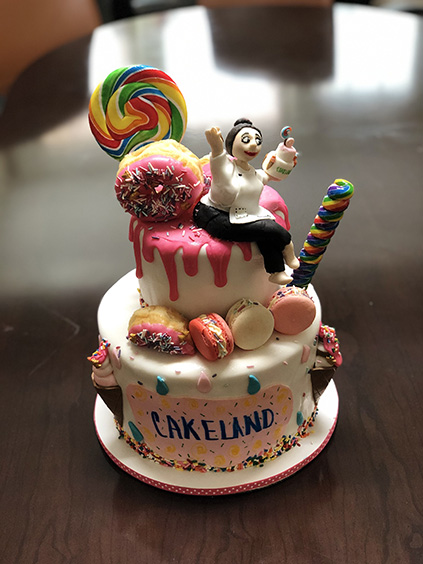 After tasting five cakes already, you might think this duo is caked out. But you’d be wrong. Before they dig in, they continue to admire the cake, almost afraid to pierce its fragile beauty.

Baker admires the ice cream cones, which she says are milk chocolate, on the side of the cake. “The presentation is spectacular,” she says.

“The is the prettiest cake I’ve ever seen without being on the British Baking show. I didn’t know people did stuff like this,” Fischer says.

Once they cut into the cake, it’s another winner. Fischer compliments the baker on her superb icing, while Baker says the coffee taste on the top shines. “It tastes just like coffee,” Baker says.