Teens and the Pandemic ‘Affect’ 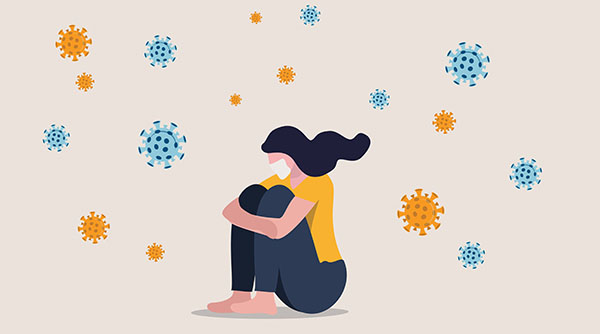 As we complete one year since first being asked to quarantine, it’s clear the year has taken a toll on all of us. As the physical risks become better managed and we begin to see light at the end of the tunnel, the emotional toll has become more apparent. For one year, we have been asked to stay away from family and friends. We’ve canceled our favorite activities, worked from home and taken on virtual schooling. There have been many challenges and several disappointments. In truth, it’s been a lot to bear.

For teenagers, a year of quarantine has brought its own harsh realities as they struggle through social, emotional and academic difficulties. Having to physically distance themselves from their favorite support systems — friends, significant others, family or worship communities — has been difficult. There has been real grief in skipping events and rites of passage they had looked forward to for years — graduations, dances, birthday parties, spring break and senior trips.

One 16-year-old, Anthony, confesses, “The hardest thing has been not seeing change at all. Every day just seems the same as the rest, being by yourself most of the day, not seeing people outside of your house. I miss seeing my friends, going to the football games. I didn’t have prom this year, I miss school social events in general. We’re not meeting new people or interacting with anyone, even when we’re at school because you don’t get the chance to talk to anyone.”

Mental Health Needs on the Rise

According to research by the Kaiser Family Foundation, about four in 10 adults nationwide have reported symptoms of anxiety or depressive disorder throughout the COVID-19 pandemic — a four-fold increase from pre-pandemic levels. Young adults (ages 18-24) have been especially hit and are about twice as likely as all adults to report new or increased substance use (25 percent vs. 13 percent) or recent suicidal thoughts (26 percent vs. 11 percent). Locally, counselors who work directly with adolescents are seeing major increases in the number of families seeking help for their teenage kids.

LPC and Certified Mediator, Juvenile Division, Dawn Spragg, has noticed first hand an increase in teens with depression and anxiety. As co-founder and director of Teen Action and Support Center (TASC) in Rogers, Spragg says the counseling sessions at the center have tripled since April 2020. “Teens are experiencing an increase in both depression and anxiety,” she notes. “We have seen a number of teens who have sought counseling in the past come back this summer as the challenges of isolation increase.” Sadly, there has been a rise in suicide assessments and referrals at the center, but families have been faced with admission delays for inpatient care because the beds are full. “School has definitely been a challenge for teens,” she adds, citing that school instability — switching back and forth between virtual, in-school and blended learning — has been tough on students. “The rise in depression has impacted motivation for education.”

Dan Luttrell, LMFT, LPC, a therapist at Summit Family Counseling in Northwest Arkansas, has seen similar issues at his practice. In recent months, his client load has increased by 50 percent to 60 percent — most of them teenagers — and the number of clients referred to psychiatrists for medication has doubled. Luttrell believes changes in education have been a major factor in mental health, beginning with the move to virtual school a year ago. Students struggled with the lack of classroom interaction and live teaching. “Initially, they weren’t getting the eight hours of engagement they were used to. They were logging on for a couple of hours and that’s it,” he explains. “That has led to the decline we’ve seen in mood and anxiety. They’re not being mentally stimulated. Just like physical exercise, they also need the right challenges put in front of them mentally.”

What Teens are Feeling

Luttrell shares that many of his clients have been rightfully grieving over the loss of sports, prom, pep rallies — all the things that make high school fun and worthwhile for students. Athletes with hopes of getting college scholarships have lost opportunities to compete and have seen those dreams slip away.

Many teens have also expressed a lack of confidence in school administration and educational decisions. “The way we’re doing school right now doesn’t feel efficient,” Anthony says. “School feels like a chore, and we’re not really learning anything. When we’re in class, teachers are more worried about being safe, and keeping COVID standards instead of teaching.”

According to Luttrell, teens are feeling cheated. They’ve reached a phase in their lives they’ve looked forward to for a long time. They’re just beginning to establish independence. Some have reached driving age and are finally old enough to do many of the things they’ve been waiting for, but all of a sudden, the rug has been pulled out from under them. They’re missing out on privileges those ahead of them have enjoyed, and no one is able to tell them when they’ll be able to go back to doing all the things they want to do.

Another thing teens are feeling is resentment. The majority of kids recognize their age group doesn’t get as sick as older groups, yet they have been asked to carry much of the burden in slowing down the spread of the virus. Luttrell shares he has heard from kids who are frustrated with the responsibility imposed on them to protect elders. Being told to not go to a soccer game because they might come home and get grandparents sick puts a lot of pressure on kids. In some instances, he has worked with families asking them to cut back on that pressure.

Spragg agrees there has been too much stress put on teens and notes it’s important at this time to reset expectations, including school performance and grades.

Anthony confesses that school has been a major source of anxiety. “Adults don’t understand how hard it is to stay on top of school because nothing feels like it really matters this school year. I don’t feel any motivation. If I’m not going to learn anything, why should I really be trying?”

The common signs of anxiety and depression are harder to identify in quarantine. “If you look at depression, the most common symptom is isolation, and we’re all in it,” Luttrell says. Another red flag is “a lack of interest in things they used to enjoy, but we took away the things they used to enjoy.” This means parents have to look more closely and be more aware. He recommends watching for downtrodden and defeated posture. Other signs include insomnia, changes in eating habits and mood swings.

Luttrell describes depression as what happens when you take negativity — such as boredom, anger and disappointment — and you turn it inward, keeping it bottled up inside. It starts to manifest into those symptoms we recognize. Many teens, especially, don’t have the skills to explain what they’re feeling, and they don’t understand it themselves — resulting in a lot of bottling that’s being allowed to fester and become a bigger problem.

• It’s normal to feel this way.

What Not to Say:

• I’m tired of hearing about it.

If you see some of these characteristics, Luttrell suggests helping your teen find an outlet physically, mentally and emotionally. Exercise helps. Getting endorphins going and the heart rate up can help increase mood. Finding any type of mental stimulation will also help to “get out of that idle.” Getting as much socialization as possible, even if it’s in a group Zoom, can help fight isolation, “which is the root of so much of this.”

Anthony says going anywhere that gets him out of the house helps. “Even if it’s just to go to a store, or a restaurant or to run an errand, it helps the day to not feel so repetitive.”

What Parents Can Do

Helping a child feel some sense of normalcy in the midst of the chaos and know they’re not alone goes a long way. “We can bond in pain, and we can handle more pain if we’re not alone in it,” Luttrell says.  One of the best things we can do for our teens is to listen to them and understand what they’re going through. Sometimes our impulse is to fix the issue, or worse, make it sound like there’s no problem at all, but that approach will most likely backfire.

“It’s important to validate where they are and not try to explain away the problem,” Luttrell says, adding that when adults start to argue that things are not as bad as they think, kids assume adults are oblivious and don’t know what they’re talking about. The better thing to do is to show you understand where they’re coming from, do some “self-disclosure” and share how this has been difficult for you as well.

“Parents need to really be listening to their kids’ needs,” Spragg adds. She recommends parents pay attention to big changes in their teens’ behavior and ask how to help them get through this challenge. “Working together is what teens need right now,” she notes. “Giving teens a safe space to process the losses they are experiencing and the frustrations they are feeling without criticism or comparison is important right now.”

Therapy is not a last resort. If you see your child is not interested in doing things he or she used to enjoy or is losing friends, it’s time to start getting help.

The Mental Health Council of Arkansas recently launched a program called Stay Positive Arkansas with coronavirus-specific crisis counselors available across the state at no charge. You can call the crisis support line at (833) 993-2382 and find more information at staypositivearkansas.com.

Note: The student’s name in this story is a pseudonym to protect their anonymity