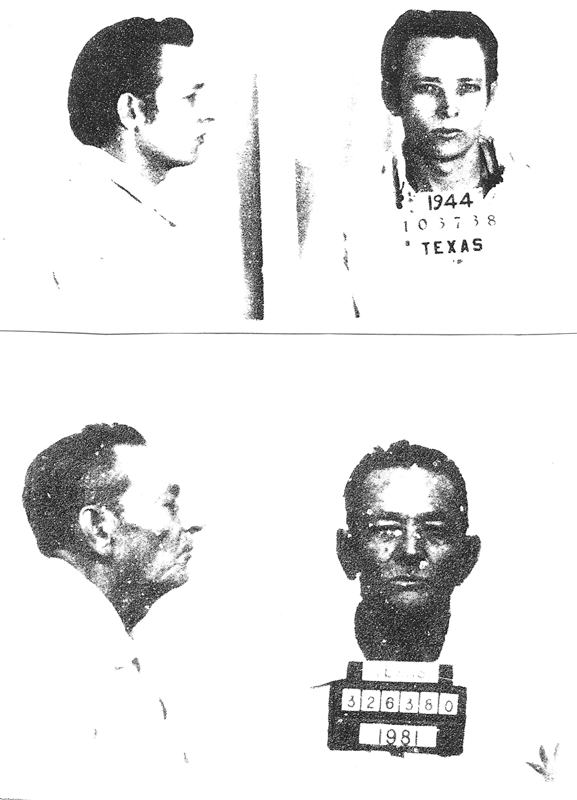 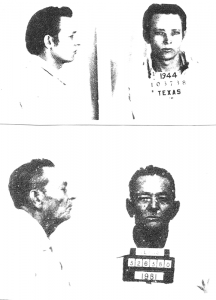 Photography courtesy of the Texas Dept. of Corrections

A skull cracking open sounds like a gunshot. That’s what Mary Jeanne Larey thought after she heard her boyfriend being hit on the head by a masked gunman. Mary Jeanne, 19, and 25-year-old Jimmy Hollis had sought privacy in his Chevy at a secluded spot off of Richmond Road on the Texas side of Texarkana after dinner and a movie. It was late Friday night, Feb. 22, 1946. The waning moon wasn’t up yet, but the darkness seemed like a cozy cocoon for the couple on one of the city’s lovers’ lanes. They were so entranced with each other that they didn’t notice the older model car that pulled up and parked nearby.

Mary Jeanne let out a cry of alarm as a sudden burst of light temporarily blinded them.

The intruder, holding a high-beam flashlight above his gun, ordered Jimmy to get out of the car and drop his pants. Jimmy obeyed. The attacker began kicking him and hitting him with the gun butt. After Jimmy was incapacitated, the assailant turned his attention to Mary Jeanne, struck her and violated her with the gun barrel. He stopped abruptly after seeing headlights in the distance. As suddenly as he had appeared, he vanished. 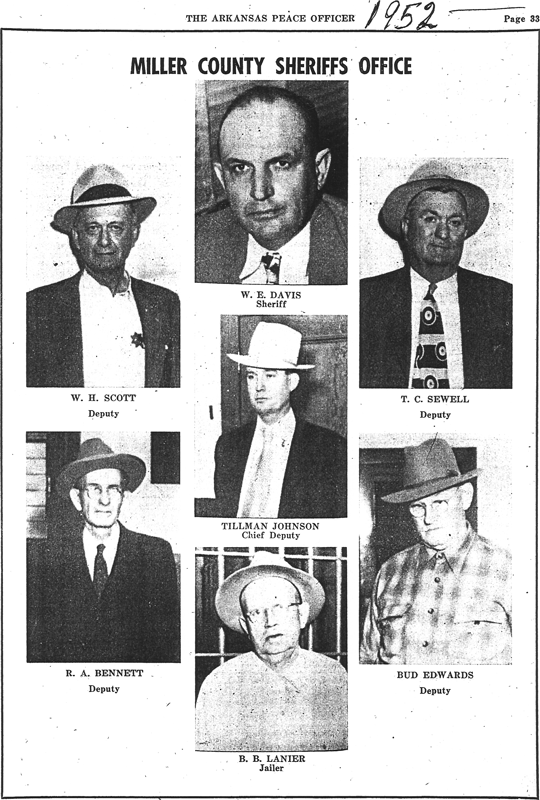 Mary Jeanne was able to get help at the first house she saw. Within a few minutes, she and Jimmy were on their way to the hospital. He had suffered three skull fractures, but he retained the memory of that night. So did Mary Jeanne. The problem for Bowie County Sheriff Bill Presley was that the two victims’ recollections didn’t match. Mary Jeanne said the man was black and wore a mask with cut-outs for his eyes and mouth. Jimmy wasn’t sure about a mask but was certain the assailant was white. They did agree that he was about 6 feet tall.

The sheriff and his men had so little to go on that they decided it was a random act of violence. Though outlying areas around the city were usually peaceful and quiet, Texarkana did have its share of criminals. Car theft had gone up considerably. Presley just hoped that Jimmy Hollis wasn’t being prophetic when he said, “If you don’t find him… he’s going to kill someone.”

A few weeks later, on Saturday, March 23, police located a 1940 Hudson sedan that had been reported stolen 10 days earlier. The thief had abandoned it in Robison Courts, not far from the Griffin residence where Richard Griffin, a Navy war veteran, was visiting his mother. That evening, he took his girlfriend, Polly Ann Moore, to a midnight movie and an all-night diner. In the wee hours of the morning, the twosome parked off a dirt road near a wooded area about half of a mile outside of Texarkana’s city limits. Exactly what happened after that is just speculation because Richard and Polly Ann were forever silenced on that cool, damp night.

A passing motorist noticed Griffin’s car around 9 a.m. on Sunday and thought it looked out of place at that time of day on a lovers’ lane. Curiosity got the better of him. Upon discovering two bodies in the vehicle, the motorist went to the nearest phone and summoned authorities. Police arriving on the scene drew onlookers who helped spread the news that two people had been murdered. The killer had shot the victims in the back of the head with a .32 caliber Colt pistol. Investigators had no reason to connect the double homicide to the Hollis/Larey attack except for one similarity: Both male victims were found with their trousers down around their ankles.

Three weeks later, a man who was suspected of stealing an old model Dodge drove away from a minor fender bender. That weekend, former grade-school classmates Betty Jo Booker, 15, and Paul Martin, 16, made plans to see each other while Paul was visiting from out of town. Betty Jo was a skillful saxophone player with a group called Jerry Atkins and the Rhythmaires. When the band’s Saturday night gig at Texarkana’s VFW club ran late, Paul went to the movies with some friends before returning to pick up Betty Jo. Instead of heading straight home to drop off her saxophone, the couple decided to go to Spring Lake Park for some quiet time together. Little did they know that their names would be linked together for all time to come. 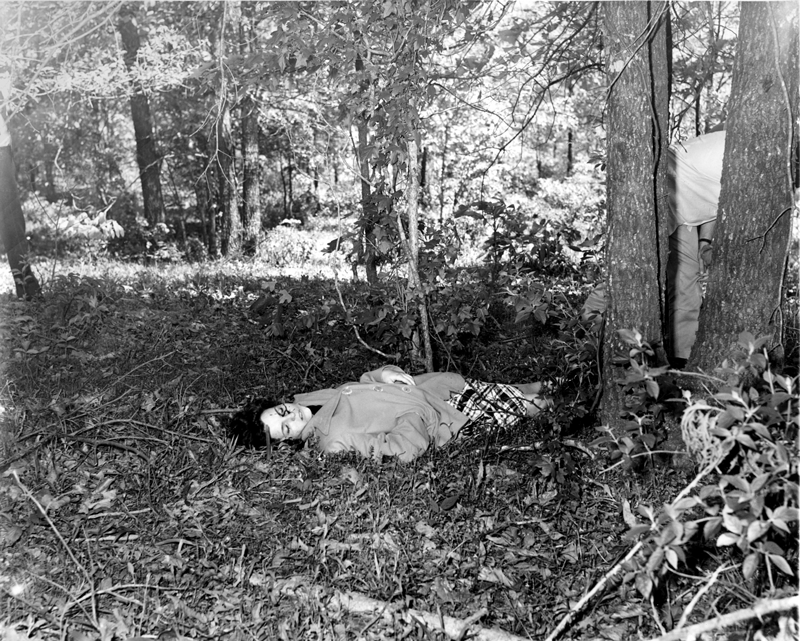 A family on an early Sunday morning jaunt discovered Paul’s body at the edge of North Park Road. He had been shot four times. Searchers found his car a mile away. A mile in the other direction and a few hours later, they found Betty Jo’s body. She had been shot twice. Vaginal bruising and the presence of semen indicated sexual abuse; it was not the result of intercourse with Paul, as his genitalia were clean. Mysteriously missing was her saxophone.

The Hollis/Larey beatings and even the Griffin/Moore murders had hardly caused a ripple in Texarkana, but the second double homicide kicked the investigation into high gear when ballistics proved the same gun was used in all four slayings. The Arkansas State Police (ASP), the FBI and the Texas Rangers joined forces with local authorities. A reward for the arrest and conviction of the perpetrator quickly rose to $6,425. Fear gripped the general public. The Paramount Theatre stopped showing midnight movies, and other businesses closed early. Couples no longer frequented isolated areas. Parents strictly enforced curfews for their teenage children. Calvin Sutton, the city editor at the Texarkana Gazette, dubbed the killer “The Phantom” because of his ability to elude capture.

On Friday night, May 3, ASP Troopers Max Tackett and Charley Boyd were travelling from Texarkana to Hope, Arkansas, to turn in their monthly expense account. Along US 67 in the Miller County community of Homan, they saw an old model car parked off the road and made a mental note to check it out when they returned. Nearby was the 500-acre farm owned by Virgil Starks and his wife, Katie. She had gone to bed, but Virgil was reading the newspaper and listening to the radio in the living room. The window shade behind his chair was only halfway down. Katie heard glass breaking and ran up front to find two bullet holes in the window and her husband’s bloody, lifeless body slumped in his chair. She rushed to the telephone on the wall, but before she could call for help, the shooter fired again, hitting Katie twice in the face. She dropped to the floor, out of sight but alive. Crawling and then staggering to her feet, she made it to the kitchen, hoping to escape out the back way, but the killer was already there. She saw his foot and leg coming through the screened-in porch. Bleeding profusely, she ran to the front of the house again and out the door. She headed straight across the highway where her sister and brother-in-law lived. They weren’t home, but their next-door neighbors were, and Katie was saved.

When the shooting was called in, troopers Tackett and Boyd were first on the scene. The suspicious-looking car they intended to check was gone. Had they missed catching The Phantom by mere minutes?

To be continued in AY‘s January issue.