The Phantom Killer of Texarkana took five lives in 1946. But was he ever caught?
In the annals of true crime, one enduring mystery is the identity of the multiple murderer known as the Phantom Killer of Texarkana. In 1946, the twin cities with one name, conjoined by the Arkansas/Texas state line, were the hunting ground for the Phantom. He murdered five people and wounded three others, always at night. Like so many unsolved cases, it became mythic with the passage of time. Countless newspaper and magazine articles, books and armchair detectives have kept the legend alive. The Phantom became part of B-movie history when Charles B. Pierce made a film called The Town That Dreaded Sundown.
The Phantom preyed on young couples parked on lovers’ lanes. The lives of his first victims, Jimmy Hollis and Mary Jeanne Larey, were spared when the assailant was scared off by oncoming headlights. Neither Hollis nor Larey could identify their attacker but agreed he was tall. Then he committed two double homicides, killing Richard Griffin and Polly Ann Moore in March and Betty Jo Booker and Paul Martin the following month. Three weeks later, he changed venues, murdering Virgil Starks and severely injuring Virgil’s wife, Katie, in their farmhouse. All fatalities resulted from gunshot wounds.
Abruptly, the killing stopped. Why?
One suspect, Youell Swinney, was never charged with murder, but some people point to his incarceration on other charges as the reason for no more Phantom slayings. He wasn’t arrested, however, until over two months after the last shooting.
Another prime suspect was Henry Booker Tennison. He usually went by H.B. or by his nickname, “Doodie.” At the time of the Phantom murders, H.B. was a 16-year-old sophomore at Texarkana Arkansas High School. After graduation, he enrolled at the University of Arkansas in Fayetteville. The 6’3” youth became part of Phantom lore on November 4, 1948, when he drank a lethal dose of mercury cyanide, leaving behind a note that said in part, “Why did I take my own life? …. Well, when you committed two double murders, you would, too. Yes, I did kill Betty Jo Booker and Paul Martin in the city park that night and killed Mr. Starks and tried to get Mrs. Starks.”
Complicating matters, however, were other writings of Doodie’s that some people interpreted as a recantation of the confession. One read, “Please disregard all other messages which I have written … as possible reasons for taking my own life.” The Texarkana Gazette proclaimed, “Note Cancelling Murder Admission Found.” It should be noted that Doodie’s mother and the Texarkana Gazette’s publisher were close friends.
Far from being denials of guilt were other passages. For example, “I did it when Mother was either out or asleep, and no one saw me do it. For the guns, I disassembled them and discarded them in different places.” And “Running away would not do any good, the police would find me.”
Among the interested parties who have studied the Phantom case is Dr. John T. Tennison, who is not only a forensic psychiatrist but also H.B. Tennison’s first cousin once-removed, and he believes H.B. is a more compelling suspect than Youell Swinney.
Henry Booker “Doodie” Tennison came from a well-to-do family but also from a broken home. When he was 3 years old, his parents divorced. His mother was emotionally distant with her children, seldom hugging or kissing them. Doodie became a dreamer who enjoyed reading comic books and watching movies. His grades in high school were under par, but as Dr. Tennison put it, “Most of his poor academic performance seemed to be caused by apathy, not from inability.”
Being quiet and introspective made it hard for him to fit in and caused some of his classmates to think of him as “strange.” He was bullied in school, beaten up more than once by other students who thought he was gay.
He was not without friends, though. He and James G. Freeman hung out together. They lived in the same neighborhood, and both played trombone in the school band. Some readers may recall a scene from The Town That Dreaded Sundown in which the masked killer torments a victim, using a trombone with a knife attachment as a weapon. James Tennison, another of H.B.’s cousins, was a consultant on the original 1976 movie, so the instrument could have been a symbolic reference to Doodie. Betty Jo Booker played saxophone in the band.
During Dr. Tennison’s research, he interviewed one person who said H.B. had claimed responsibility for the Booker/Martin murders while in high school. “But if so,” Dr. Tennison said, “it seems to have been a comment that was not taken seriously, and the claim does not appear to have put him on the radar of the authorities.” 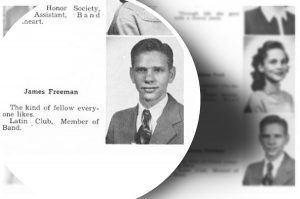 Then came the suicide and the note. Investigators questioned Freeman, who said he and H.B. had been playing cards or checkers at the Tennison home at the time of the attack on Virgil and Katie Starks.
Dr. Tennison presented the theory of H.B. as the Phantom at a forum in Texarkana in 2014. He pointed out that Jimmy Hollis and Mary Jeanne Larey had gone to the movies at the Paramount Theatre the night they were attacked. Richard Griffin and Polly Ann Moore had also seen a movie at the Paramount on the night of their murders. One victim in the second double homicide, Paul Martin, had been at the Paramount with some friends on the evening of his slaying. “This pattern,” Dr. Tennison said, “suggests that someone affiliated with the Paramount Theatre or a frequent moviegoer to the Paramount Theatre might be connected to the first three attacks. H.B. Tennison was an avid moviegoer and worked as an usher at the Paramount Theatre during high school, including the 1945-1946 school year.”
Another connection to a victim: Katie and Virgil Starks often visited Katie’s sister, who lived next door to James Freeman.
Freeman became a person of interest to authorities partly because of his friendship with Doodie and partly because he was already known to police. According to Dr. Tennison, Freeman family members and a next-door neighbor said James used drugs and exhibited inappropriate behavior toward females. He engaged in hypersexual talk about women that made others in his company very uncomfortable, although Doodie didn’t seem bothered by it. Freeman was once married for only six weeks. After that, he led a reclusive existence, living with his mother until she died in 1973. A little over a year later, James shot himself to death.
Dr. Tennison stated, “I don’t have an opinion about whether or not James Freeman played a part in the murders. However, I consider it plausible that he did.”
Was Doodie the Phantom? Was Freeman? Did they kill as a team? Could it have been like the Leopold/Loeb case that gained the national spotlight in 1924 when Nathan Leopold and Richard Loeb, who were lovers as well as friends, teamed up and killed 14-year-old Bobby Franks just for kicks?
James Freeman remains a mysterious figure who gave up on life long after it had given up on him. Whatever secrets he may have had lie buried with his bones, while the legend of the Phantom lives on.