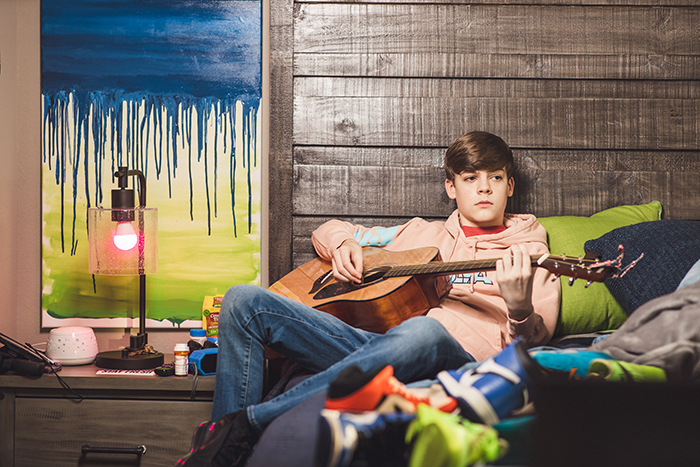 His talent speaks for itself, on his accord; his humility and maturity, more than admirable. But Paxton Singleton’s footprint as an actor almost never happened, something that now seems almost unbelievable, given his success.

“I realized he had the talent for it before I knew he wanted to do it,” Cortney, his mother, says. “He did a cold read for a local play, and I could see the raw talent was there. I wasn’t really expecting it, but when I got home that night, I told my husband that we may have a serious talent on our hands.” 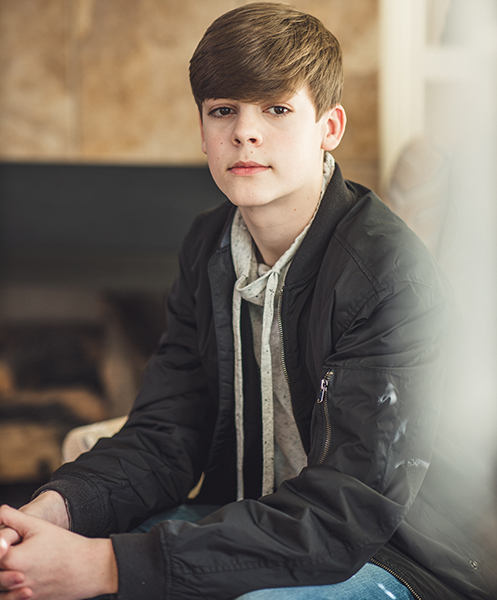 “But I wasn’t hooked,” Paxton adds. “I’m not really interested in theater at all.”

Once they recognized this initial disinterest was not related to acting, but rather a single branch of the profession among many, enthusiasm began to sprout. His ears perked up with desire at the thought of utilizing his natural talents in movies or on television.

Paxton traveled to New York when he was 11-years-old for his first chance on the screen, an New York University graduate student’s short film called “Our Beach.” Just one credit to his name, Paxton was already enamored.

He became a frequenter of the smaller circuit, at first, starring in shorts such as “Three Musketeers” in 2016 and the music video for artist Conor Oberst’s song, “Barbary Coast (Later),” which has garnered over 150,000 views on the singer-songwriter’s official YouTube page.

“I was starting to book short films and film student projects pretty regularly, and then booked my first independent feature film,” Paxton recalls. “That’s when my mother thought it would be a good idea to go ahead and look for a manager and agent in Los Angeles. After that, things moved pretty quickly.”

Paxton was asked to journey out to LA for episodic season, when many television shows fill guest and costar roles; whereas, series leads are generally cast during the preliminary, pilot season.

One of his first auditions was for a new Netflix Original Series, “The Haunting of Hill House,” from creator Mike Flanagan (“Doctor Sleep,” “Oculus”). Just one call back later, the showrunners offered Paxton the role of young Steven. 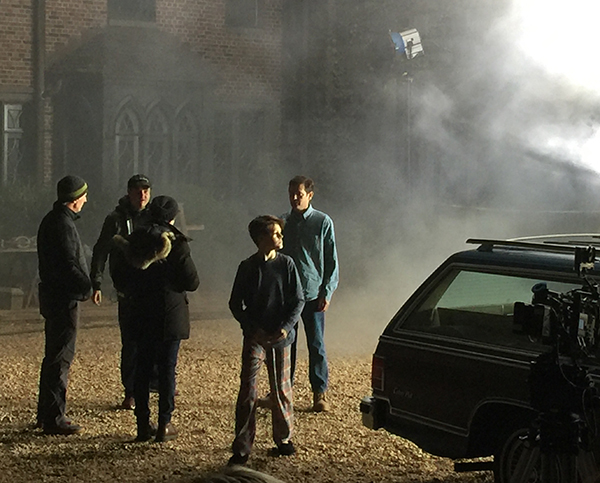 Paxton on the set of “Hill House.”

“They took a chance and booked this no-name kid,” Paxton humbly jokes.

“The Haunting of Hill House” follows a group of siblings in present-day, whose current relationships are hindered by the hauntings of their past — growing up in Hill House. Because of the oft-used flashbacks showing what happened to them as children to explain the fractured paths they followed, the story is told in a rather non-linear fashion; meaning Paxton, as well as his other “young” costars, play pivotal and starring roles in the show.

And the older version of Paxton’s character, Steven, was played by none other than Michiel Huisman, a fan favorite on the HBO series, “Game of Thrones.”

Paxton and the rest of the cast and crew began filming the series in 2018, which was released on the streaming platform in October of that year.

“My mom and I moved [to Atlanta] for about six months while shooting,” Paxton says. “Most of it was filmed on a soundstage, but we did the outside shots on location in a small town outside of Atlanta called LaGrange. That’s a real house. Of course, it’s not really ‘Hill House.’”

After filming and post-production wrapped, the show was ready for the premiere, which presented Paxton with one of his coolest acting memories to date. 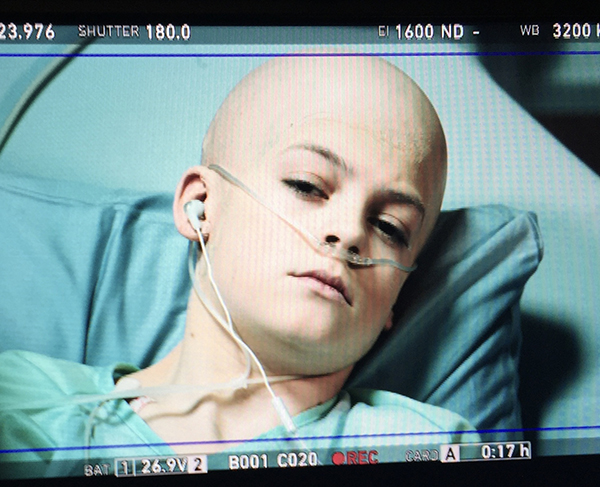 “I walked the red carpet, did interviews, signed autographs and got to see myself on the big screen,” he says. “My mom, dad and brother were all there for it. It was really special.”

According to Netflix, the show, which has been met with both audience and critical acclaim, was one of its most binged of 2018. Millions of viewers tuned in to watch, and they noticed Paxton. For the first time in his young career, someone recognized him on the street for his acting.

“My mom and I were walking through an outdoor mall in LA right after ‘Hill House’ came out,” he remembers. “We walked past a patio restaurant and a couple saw me walk by. They pointed and said, ‘That’s the kid from Hill House!’ I took a picture with them. It was a pretty proud moment.”

But, painting a portrait of his true colors, the fame was not Paxton’s favorite part about starring in the project. Rather, it was the friendship he made with costar McKenna Grace (“Captain Marvel,” “Fuller House,” “Young Sheldon”), who portrays young Theo in the show.

“When we are in the same city, or even state, we always try to get together,” Paxton shares. “She is a wonderful actress, but an even better person.”

Also in 2018, Paxton guest-starred in an episode of the ABC television series, “The Rookie,” which is filmed in LA and led by Nathan Fillion, a journeyed actor of almost 30 years.

“Although almost everyone is nice, Nathan Fillion might be the nicest and most polite,” he says of the actor, who is among Paxton’s favorites to have worked with.

Last year, Paxton found himself back on another popular cable television show, landing a guest spot on an episode of the ABC series, “Chicago Med.” Thus far, this role is his most prized.

“Though hard and challenging, in the end, I was the most proud of that performance,” he says.

He checked another network off the list in 2019 with a role in Fox’s “The Resident.”

“This early in my career, I get to learn something new with each project,” Paxton says. “With ‘Chicago Med,’ I got to play a really heavy scene full of tears, ‘The Resident’ was my first experience with serious prosthetics, and ‘The Rookie’ was my first time working on a major Hollywood lot.”

Amidst the notoriety and achievements, it was also in 2019 that Paxton made a consequential decision. Up to that point, he had been homeschooled for the three preceding years and traveled from coast to coast on film sets. But, at his core, he is a 15-year-old boy — a self-professed “sneakerhead” and car lover. He wanted to experience a traditional life for a little while.

“I really wanted to have as much of a ‘real high school experience’ as possible, so this year I enrolled at the Arkansas Arts Academy,” Paxton says. “I’m actually not involved with any of the acting stuff that the school provides. I wanted school to be a break from that part of my life. So, I’ve been taking guitar, fashion design and creative writing.”

But, he’s still an actor infatuated with his craft, just one who wants to slow down and eat his cake.

“He didn’t want to audition for every part that came his way but just projects that really appeal to him,” his mother says of Paxton’s choice. “He didn’t want to travel for audition seasons … So, when we’re home, everything is pretty much normal, and his acting career is a very small part of our lives. However, everything goes into high gear when we receive an email that he has an audition.”

When those calls come, it’s back to the fridge with the slice of iced dessert but only temporarily. A call that Paxton is interested in usually means that within only a couple of days he must prepare and send in an audition tape. If he books, his mother estimates they are usually on a plane within 24 to 48 hours — gone for anywhere from two weeks to six months.

“This is why the whole family has to be on board,” Cortney says. “It takes a lot of help to pull it off.” The family also includes a younger son, Tasker, and father, namesake Paxton Singleton.

For mom and dad, their own version of normalcy has developed over the years.

“I sort of feel like I live two separate lives,” Cortney says. “One where I’m just a mom taking care of my people, and another where I’m on movie sets and talking to actors that I’ve followed most of my life. I go to my younger son’s sports events, and I go to my older son’s red carpet premiere. 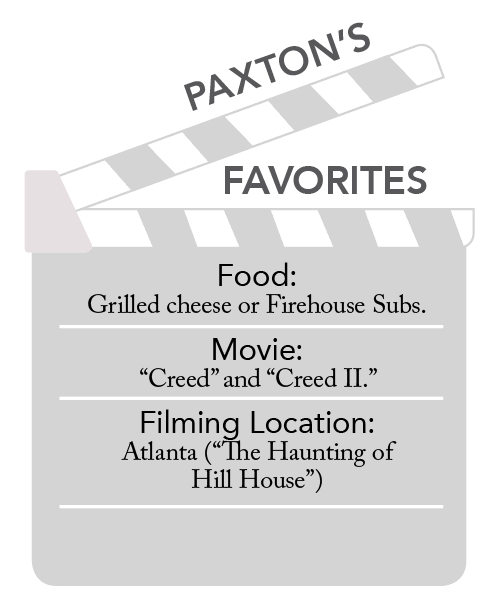 Paxton just happens to have filled in one of those gaps with acting. And he’s done a fine job of it, so far.

For him, the aims are simple, as grounded as his nature.

“In this business, you just work your hardest and hope for the best,” he says. But if pressed, he can easily come up with an even more specific goal. “I’d love to get to work with Leo [DiCaprio].”

Keep a keen eye on your screens this year. We already know Paxton is starring in the 2020 film, “Alice Fades Away,” but you never know what major television network he will appear on next.