The Art of the Duck 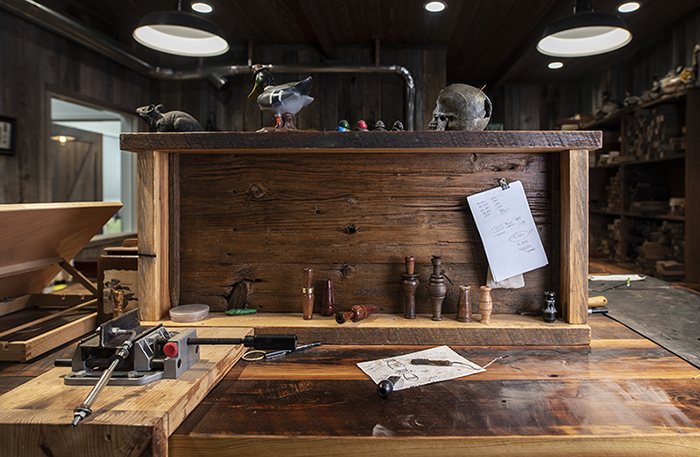 On cold autumn mornings in Arkansas, the sound of duck quacks fill the air as mallards, redheads and more of these waterfowl fly overhead, migrating down the Mississippi Flyway. The sound grows to a crescendo, a chorus of duck calls — finally punctuated by the fatal blast of a shotgun, sending a greenhead crashing down to the ground with a thud, to be picked up by a faithful hunting dog.

Duck hunting isn’t just a matter of pointing a gun in the air, pulling the trigger and hoping for the best. It’s a tradition, often passed down from father to child, stretching back generations. It has its own superstitions, tricks of the trade and tools. In The Duck Hunter’s Handbook (1974), Bob Hinman writes, “When done under the rules of good sportsmanship, duck hunting is a culmination of art, skill and scientific endeavor. It is also an act of love, for who loves the birds more than the hunter?”

And where would a duck hunter be without the tools of the trade? The duck call. The decoy. The gun. All are critical to the hunt, but they’re not just tools — in the right hands, these implements of the kill are works of art.

It’s not just the tools, though, that qualify as works of art. Duck hunting has inspired art throughout the United States, ranging from duck stamps to taxidermied ducks. With its rich tradition of duck hunting, Arkansas has an impressive history of making art that focuses on ducks and duck hunting. Whether it’s duck calls, duck stamps or duck decoys, these objects, which are at some levels tools (even the stamps to a certain degree) are folk art, according to John Stephens. The president of RNT Duck Calls in Stuttgart and a three-time winner of the World’s Championship Duck Calling Contest, Stephens says these hand-crafted objects fit into a lineage of history.

“Decoys and duck calls both are one of the earliest and one of the truest American folk arts,” he says.

The two big folk art traditions in the United States, Stephens says, are duck call-making and decoy making. Handmade decoys have been whittled  for more than 1,000 years by Native Americans, who would use feathers and other materials found in nature to create rudimentary decoys, according to a 2015 Popular Mechanics article. Later, colonists began using different woods to create buoyant decoys, and in the 19th century, the practice of decoy-making began evolving into an art form as well as a way of hunting ducks.

Despite its long history of duck hunting, handmade decoys never established a foothold in Arkansas, according to Stephens. He attributes this to environmental causes — Arkansas duck hunting takes place largely in wooded areas where the decoys would not be as useful. Ducks Unlimited cites the Chesapeake Bay, Massachusetts, New York, New Jersey, Maine, the Illinois River Valley, Michigan, Minnesota, Wisconsin and Louisiana as the primary centers of handmade carving.

That’s not to say that Arkansas has no decoy carvers at all. RD Wilson is proof of that. After a cancer diagnosis in the 1960s, Wilson decided he wanted to try out decoy carving, and a fruitful hunt sealed the deal. 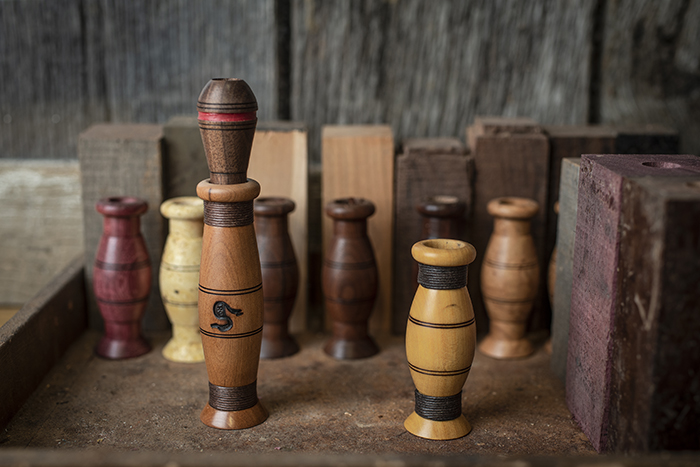 Using a block of wood, Wilson uses his tools to find the shape of the duck, creating decoys that can be used to hunt or for antique-style ducks. He then applies the paint and adds any necessary features, like eyes.

But there are few others who practice the craft of making decoys here in Arkansas. That’s where duck calls come in.

To Maverick Dunn, the founder of Russellville-based Dunn Callin Duck Calls, a duck call is more than a piece of wood or acrylic. It’s a work that is molded by an individual with unique touches that distinguish it from other makers’ works.

He knows what he’s talking about, having collected calls since he was nine years old, in addition to making them himself. Dunn’s personal collection numbers more than 200, including the first call he ever got.

“For me, it’s the personal touches that each one has. We’re pretty rich in duck call-making in Arkansas,” Dunn says. “Everybody has their own design, their own personal touch that makes them artwork and different in each person’s hand.”

These personal touches can range from the material used to craft the calls to the designs and engravings that the call maker puts on them. Then, there are the touches that the person buying the call can add. Dunn says that he often gets customers who want to add engravings commemorating special events or animals.

“The most consistent thing we engrave on there are duck campaigns and a lot of stuff with dogs — maybe somebody lost a favorite dog … A memorial for a good hunting dog,” he says. “This goes back to the personal touch, and this is a way for them to put their personal touch on it. They can make it their duck call by personalizing it and adding to it.

“We’ve got some really big names in Arkansas. One of the first ones to come to mind is Butch Richenback, who really made duck calling mainstream with his business RNT. Rick Dunn is another big one. They really paved the way for guys like us.”

For Rick Dunn, the level of artistry in contemporary duck calls does not match the examples found in the 19th and early 20th century with their elaborate scroll work and intricate carvings. Despite the differences, he says that modern duck calls are a fusion of form and function.

“They were really art forms back then. Nowadays, you don’t have enough time to make calls with that much art on them and make a living out of them,” he says. “People like to have a nice looking call that makes a good sound.” 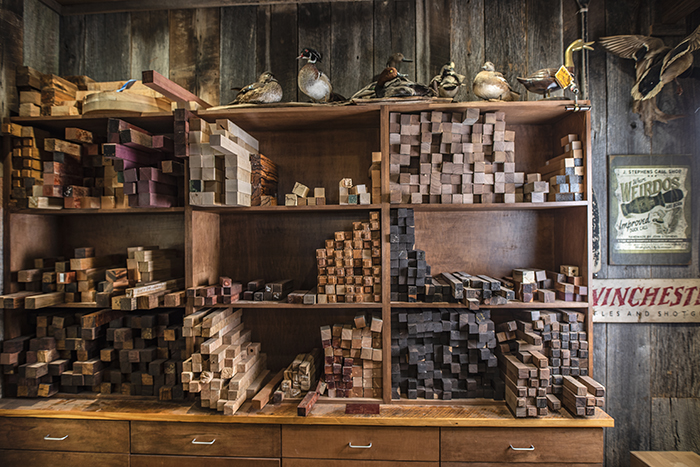 According to both Rick Dunn and Stephens, the art of the duck call isn’t limited to the physical object but includes the sound that is produced. Call makers aim to create a pleasing sound that can lure ducks to their location. “What constitutes a good sound is the one that sounds the most like a duck,” Dunn says plainly.

It’s little surprise that some of Arkansas’ best known call makers, including Stephens, Dunn and Elite Duck Calls founder Brad Allen are all past World’s Duck Calling Championship winners. Stephens and Allen both won the maximum number of three times.

Arkansas’ reputation as the place to go for duck calls is growing and is spreading internationally, according to Allen. He attributes this to the tradition of passing down the history and craft of call making from one call maker to another.

The program started in 1981 with 2019 marking the 38th year of the state’s Duck Stamp Program. The primary purpose of the program is to raise funds for waterfowl habitat improvement and to provide public land access for duck hunters. However, it’s also showcasing some of the finest artistic talent in Arkansas and their take on the duck hunting tradition.

These stamps, according to Gov. Asa Hutchinson, reflect a deep Arkansas heritage. “It’s not just about the hundreds of thousands of hunters and anglers in the state of Arkansas, it’s part of who we as Arkansans are,” Hutchinson says.

Across the state, from the northwestern corner to the southeastern heel, duck hunting is something that unifies Arkansans. It creates camaraderie and friendly competition. Consciously or not, people are participating in and supporting the creation of great art works — the humble tools used in the hunting tradition.

Like any craft, the onus is now on us, as Arkansans, to foster talent and to continue our folk art traditions in order to pass them down.

“We need to definitely be able to pass that along, especially in a day and age where people are doing less and less — not only hunting but doing things like building calls,” Stephens says. “We need to make sure that the next generation knows about it because we sure don’t want to be the ones that let it die off.”

While the ducks might appreciate the reprieve that this might bring, the tradition of making duck-centered art looks to be going strong.