The Boys of Piggott

With his tall, gangly frame, shock of red hair and “open cab door” ears, Alva Lasswell, who grew up in Piggott 100 years ago, was one of the least likely people to be considered a war hero.

But Lasswell is credited for breaking three Japanese codes that were catalysts to weakening Japan’s military during World War II and helping end the conflict. His work took away any spark of retaliation the country may have fostered after U.S. forces dropped atomic bombs on them in 1945, which led to its surrender. He intercepted one code that outlined a Japanese aerial attack on Midway Island in 1942 which helped ready U.S. forces. A year later, he pinpointed where Japanese Admiral Isoroku Yamamoto would be that led to the attack and downing of his aircraft, and in 1944, Lasswell decoded a Japanese message that discussed a planned revenge ambush on U.S. Gen. Douglas MacArthur as he traveled back to the Philippines. 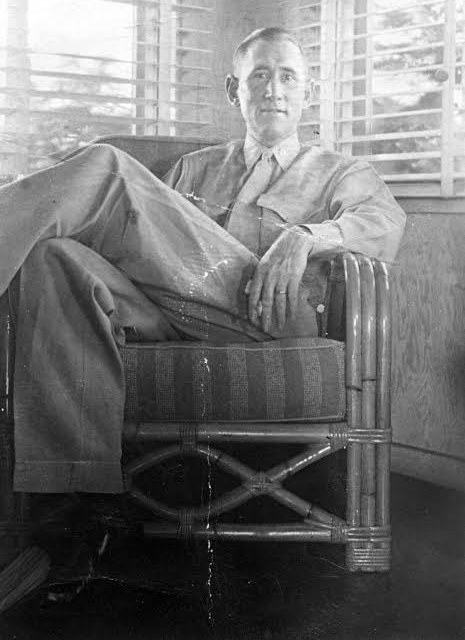 “What he did was absolutely incredible,” says Clifford “Joe” Cole, a Piggott attorney and town historian who has written two books about former Piggott residents’ involvement in the war. “I’d have to say he had the most impact on ending the war.”

Cole’s books — The Piggott Boys which was published in 2018, and its sequel, The Piggott Boys, Part II: The Boys on the Board, which was recently released, chronicle the lives of scores of soldiers who came from the Arkansas town. The “board” in the second book refers to a large billboard that sat on the town square and contained an ever-growing number of the Clay County townsfolk who went to war. By war’s end, the billboard listed more than 1,000 names. Both books are available through Amazon.

Cole had a chance to be a Piggott Boy himself. He was drafted during the Vietnam War, but because he suffered from polio as a child he did not serve. He contends Piggott played a large role in World War II.

“I’d see stories like his,” Cole says of Lasswell. “As I researched them, I realized that those stories needed to be told.”

After spending years in Memphis as an attorney, Cole returned to set up his law practice in Piggott, a community of 3,600 that sits in the extreme northeast corner of the state in the instep of the Missouri Bootheel. Cole also owns a bed and breakfast on the courthouse square and is a Methodist minister, in addition to being a promoter of his town. It took him years of research to write the first book. After the spring 2020 publication of The Boys on the Board, Cole plans to write another book about his own memories of his city. 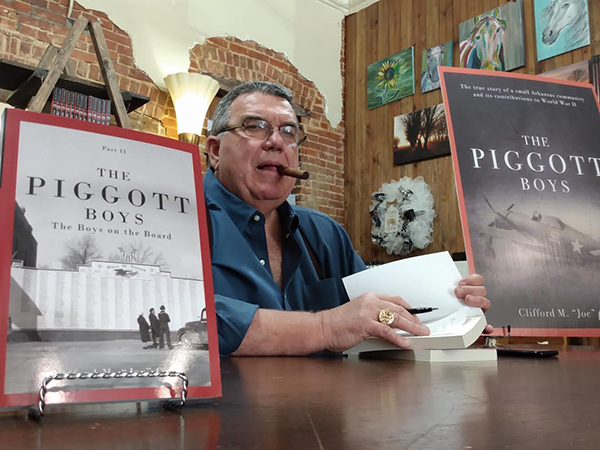 Author Clifford “Joe” Cole at a book signing in May, following the release of his second installment in The Piggot Boys series.

For years, Lasswell’s accomplishments were little known because of the military’s desire for security, and it wasn’t until 1987, a year before his death, that Lasswell finally received recognition and honor.

In 2017, Cole campaigned successfully for Lasswell’s induction into the Arkansas Military Hall of Fame and two years later, he became a Hall of Honor Inductee with the U.S. Marine Corps.

“Lt. Col. Alva ‘Red’ Lasswell coupled cryptanalytic and language skills with analytical insights that were decisive in turning the Pacific War in favor of the U.S.,” his induction reads. “His actions influenced strategic decisions that helped shorten the war and save countless lives.”

So, how did a Piggott boy who didn’t even finish high school have such an impact on U.S. history, Cole wondered as he wrote about Lasswell.

Lasswell was born in Walpole, Ill., on Jan. 3, 1905, and moved with his family to Piggott when he was about 4 months old. He attended school in Piggott but never completed high school and was instead homeschooled by his father, Charles Lasswell, who was a teacher, lawyer and mayor of Piggott. At 13, Lasswell tried to enlist in the Marine Corps but was booted out of the recruiter’s office in Jonesboro because he was far too young. Five years later, in 1921, he moved to Oklahoma and worked as an accountant for a business. It was his first dealings with numbers.

“He had what I called an ‘unquiet’ brain,” John Lasswell, 74, of Lompoc, Calif., says of his father. “He was always thinking about things. He never sat down without doing something. He would do every puzzle in the newspaper in pen. The only peace he had from constant thinking was solving those puzzles.

“The truth is, we place a lot of emphasis on schooling as opposed to the ability to reason. [My] dad’s father had an ‘unquiet’ brain as well. Even though he didn’t finish school in Piggott, Dad was raised with a thirst for gathering information.”

Lasswell tried again to enlist with the Marines in 1925, and this time was accepted. He was moved to Japan in the 1930s, where he learned the language and culture. He married Betty Pierce, an American woman living in Japan, on June 3, 1938, before immediately transferring to the Philippines where he began training as a code breaker. In 1941, only a few months before Japan attacked Pearl Harbor, he was stationed at HYPO, a U.S. intelligence site in Honolulu. He lived near the base and watched as Japanese fighter planes bombed U.S. planes and ships on Dec. 7. He checked on his wife, Betty, and newborn son, James, at home before running to the “dungeon,” the office where the code-breaking was conducted. 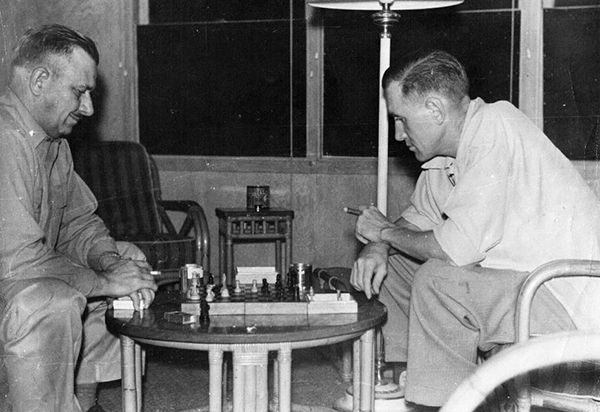 Lasswell decoded his first major message late one evening in April 1942. Japanese armed forces were using a coding system that used five digits for each word. He had to determine which codebook to use, and opted that night on code “JN-25” and began working. The codes were in Japanese and employed a complicated double-encrypting system, but Lasswell kept working and eventually deciphered a Japanese plot to attack Midway Island in the Pacific Ocean.

His findings were met with skepticism by Washington, D.C., officials.

“They were saying, ‘Who is this redneck from Arkansas telling us what to do,’” Cole says.

Admiral C.W. Nimitz asked Lasswell how certain he was of the message. Washington military personnel felt the attack would instead be on the Aleutian Islands, in Alaska.

“One hundred percent, sir,” Lasswell replied. The HYPO station convinced military leaders when they sent a bogus message that the desalination plant at Midway had broken down, and the water couldn’t be purified. Lasswell soon decoded another Japanese message that made reference to the island’s water plant, and he knew he was right about the target.

U.S. troops were ready for the attack and, in an aerial battle that became the source for at least three movies, turned the tide of Japan’s quest to dominate the Pacific war theater.

Then, on April 13, 1943, Lasswell decoded another message that noted when Adm. Isoroku Yamamoto, who planned the attacks on Pearl Harbor and Midway, would fly from the Japanese-held island of Rabaul to the island of Bougainville. U.S. planes were ready and fatally shot him down on April 18, 1943.

Finally, in May 1944, Lasswell intercepted a third major message that the Japanese planned to ambush Gen. MacArthur as he fulfilled his 1942, “I shall return,” promise and came back to the Philippines. The message indicated the Japanese navy would place seven submarines near where MacArthur was expected to arrive by ship. U.S. forces sent their own submarines to the noted sites and sank all of the Japanese subs, saving MacArthur.

“Here’s a man who was six feet tall and skinny, had bright red hair and had ears that looked like the opened doors of a cab,” says James Lasswell, 79, of San Diego, Calif., of his father. “But he was a hero. All my life, I wanted to be what my dad was. My mother would always say what a great man our dad was and one day we’d realize it.”

Both children didn’t really know of their father’s impact on the war until they were in their mid-20s. Lasswell didn’t talk much of his career because of the top-secret nature of it, and he was humble. Part of his work ethic surfaced when his children became frustrated when working on the crossword puzzles his father favored.

“How do you finish them?” they would ask him after being stumped on the second or third clue. “You don’t quit,” Lasswell told his boys. “You keep looking at it and never quit.”

Both John and James Lasswell followed their father’s career and each spent 25 years in the U.S. Navy before retiring.

And Lasswell wasn’t the only Piggott resident who impacted the war, Cole says.

Leslie Biffle, a businessman and U.S. senator who grew up in Piggott befriended Harry Truman and helped him campaign as a Missouri senator. When Truman was named president after Franklin Roosevelt died in office in 1945, one of the first calls Truman made was to Biffle. Cole says Truman later installed a direct line to Biffle’s home in Washington, D.C., and often called him for advice. Biffle, who died in 1966, was honored in a July 4, 1949, parade in Piggott that was attended by Truman’s vice president, Alben Barkley. In a letter apologizing for not being able to attend, Truman wrote, “I know that the pride which Piggott regards you is matched by the pride and affection of many people in all walks of life … I commend your neighbors in Piggott for their good judgment in setting aside this Fourth of July as Les Biffle Day.” 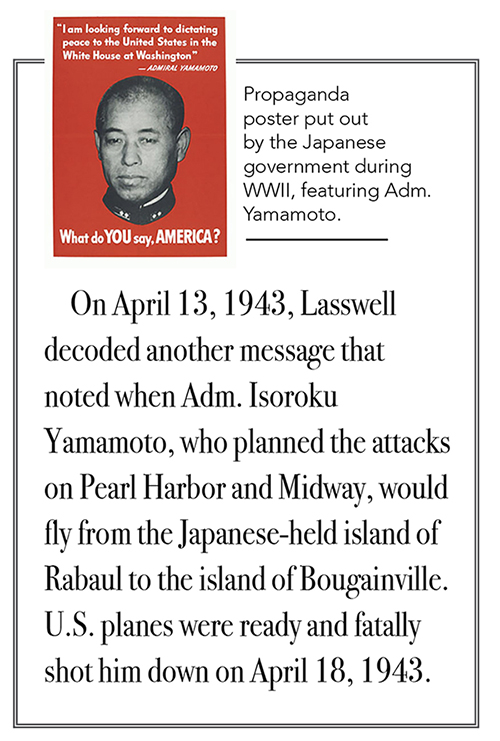 Even Piggott itself played a role in the war. When residents sold enough war bonds, the U.S. Air Force named a P-47 fighter plane the “Town of Piggott, Arkansas.” The plane flew in battles from April 6, 1943, to February 28, 1944, and recorded four “kills.” Its pilot, Pierce McKennon, was later shot down over England in another plane and a search team went out looking for the wreckage and McKennon. One of the members of the team was author Ernest Hemingway, who had lived in Piggott, and wrote A Farewell to Arms there when married to Vogue editor Pauline Pfeiffer.

“During the war, Piggott seemed to be the crossroads of the universe,” Cole says. “Piggott is a nice community with an incredible history.”

READ MORE: A Murder Mystery For You To Solve