The Buffalo National River: More than just a Canoeist’s Paradise 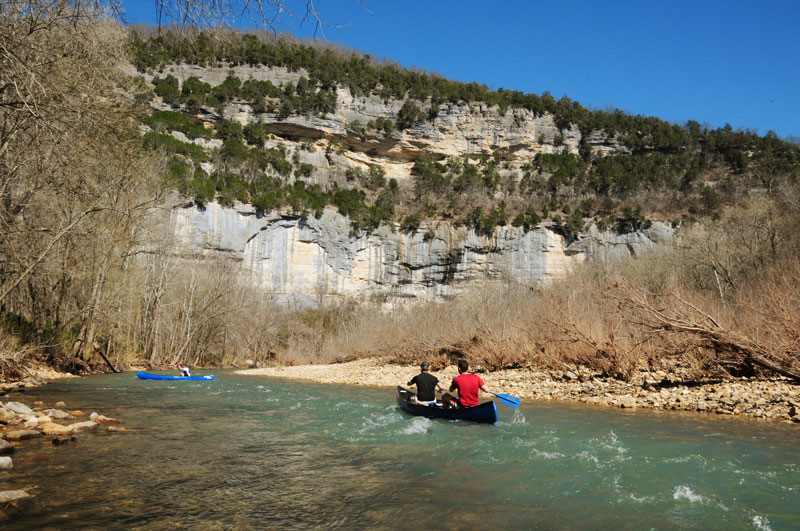 As a former outfitter on the Buffalo National River, I can fondly recall a number of memorable incidents over the years. Our modest operation was located at Silver Hill, not much more than a wide spot on U.S. Highway 65 a few miles north of Marshall in Searcy County, and we’d host guests from all over the country. My favorite goes back to the time a middle-aged couple from Louisiana walked through the front door and asked about a canoe trip. They’d arrived on a perfect spring morning in late May, a day with fluffy white clouds floating across a brilliant blue sky, temperatures in the mid-70s, and low humidity. And the water conditions were ideal.

Neither of our guests had been canoeing before and were eager to give it a try. Once they signed the liability waiver forms and their credit card cleared, we climbed into the Suburban and headed north on Highway 65, soon crossing the Buffalo. 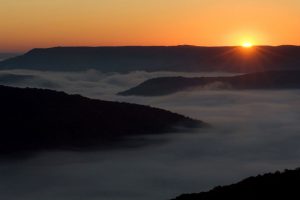 “In a few hours you’ll float under this bridge,” I said, “and then I’ll meet you at Gilbert an hour or so after that. You’ll recognize the take-out spot because of all the canoes and trailers.”

We drove upstream to the put-in point at Woolum. It’s located opposite the mouth of Richland Creek on one of the prettiest gravel bars along the entire river. There was so much water going through and across the shoals that it was difficult to talk. I placed their canoe on the shore, tied in the ice chest, and handed them each a paddle and a life vest. After the man carefully took his seat in the stern, his wife stepped aboard and sat in the bow. As I leaned forward to gently shove them into the current, the man raised his hands, gave me the classic “Time Out” gesture, and, over the roar of the rushing water, yelled, “Which way do we go?”

I refrained from saying something I’d regret, smiled and pointed to the left, and then watched as they successfully negotiated the minor rapids and rounded a bend, disappearing from sight. Luckily for them, we had a special on downstream excursions that day. When I picked up my new Louisiana friends later that afternoon, they were grinning from ear to ear, almost giddy after spending several hours on the Buffalo’s crystal clear waters. They’d fallen in love with the Ozarks and were ready to buy a piece of paradise. That was the case with about 95% of our customers. It’s just hard to beat a float trip on the country’s first national river.

If there are any math wizards reading this piece, they’re probably curious about that other 5 percent. After careful observation and analysis, I determined these were generally couples having troubles of one sort or another in their relationships. For some reason, they thought a day together in a canoe would be a great way to patch things up. They soon realized that was a terribly misguided assumption.

Decades have passed and I still enjoy a float trip on the Buffalo. But I’ve come to realize that there’s more than one way to collect lasting memories along this legendary stream. In the paragraphs that follow I’ll share some of them with you.

I understand, for instance, that a water-based experience is not on everyone’s bucket list. For history buffs I’ll recommend a trip to Rush, allegedly the only ghost town between the Mississippi River and the Rocky Mountains. Located toward the river’s lower end and a few miles east off Arkansas Highway 14, this abandoned community once housed nearly 5,000 residents – many of them prospectors searching for zinc. The mining frenzy began in the early 1880s and civilizing influences – hotels, restaurant, bakery, theater, general stores, saloons, post office, dance halls, and perhaps a few churches – soon followed, but the end of World War I brought a crash in the zinc market and the town died. A dozen or so buildings still stand and are recognized by the National Register of Historic Places as the Rush Historic District. Photographers will find it an interesting stop. 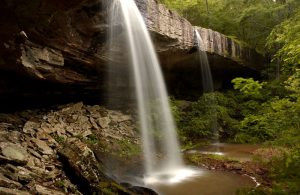 Photographers will also enjoy a great collection of waterfalls within the Buffalo River’s 856,000-acre watershed (of which 94,000 acres are within the national river boundaries). Hemmed-In Hollow Falls, of course, is the best known of the lot. Shooting this iconic 209-foot-tall favorite requires a good bit of work and a serious commitment of time. There are two options to reach the falls by foot: the Centerpoint Trail and the Compton Trail (with trailheads for each on Arkansas Highway 43 north of Ponca). At 2.5 miles (one-way) the latter is by far the shorter of the two, but the hike out from the falls isn’t for the faint of heart. A third possibility is to canoe to the trailhead along the river and then hike half a mile up the creek to the base of the falls. Spring is the best time to grab a dramatic shot.

Lost Valley, a former Arkansas State Park and now a day-use area operated by the National Park Service, features several nice waterfalls. The first, about three-fourths of a mile up an easy trail, is actually a gaping hole in the canyon wall where Clark Creek pours five or six feet into a shallow pool. Another quarter of a mile or so north is a series of waterfalls just beyond the enormous Cob Cave bluff shelter. The most visible is Eden Falls, which plunges approximately 50 feet, landing in a spray of water. Above this cascade is yet another falls, which pours from the mouth of a cave (and the adventurous may want to check out the 30-foot waterfall inside the cave). Lost Valley is located in Newton County between Ponca and Boxley on Arkansas Highway 43.

Although the next four waterfalls on my recommended list aren’t within the Buffalo National River’s boundaries, they’re all on streams that flow into the Buffalo. And given that they’re in the Ozark National Forest, each one is on public property owned by you and the other 325 million American citizens. Strangely enough, Falling Water Falls is one of those rare cascades that can be viewed from your vehicle. It’s located in extreme southwestern Searcy County a few miles southeast of the community of Ben Hur on Forest Service Road 1205. Continuing north on this same gravel road will bring you to the Richland Creek campground. A long and arduous trek up the creek (plan on a full day on the trail) will eventually bring you to the mouth of Devil’s Fork Creek. A quarter-mile hike up this tributary will yield one of the best spectacles in Arkansas: Twin Falls. Returning to Richland Creek and heading upstream for a short distance will bring you to another amazing sight: Richland Falls. For complete details on these cascades and others, consult the Arkansas Waterfalls Guidebook by writer/photographer Tim Ernst.

Hiking enthusiasts have several appealing options in the Buffalo River country. Located entirely within the boundaries of the national river is the Buffalo River Trail, which begins about a mile south of the Arkansas Highway 21 bridge at the old Whitely Homestead. This rugged and scenic trail passes alongside historic homesites, farmsteads, and cemeteries and also provides great views of the riparian landscape. Over 50 miles of trail are in place and work is underway on other sections. Also, the nationally recognized Ozark Highlands Trail passes through a good stretch of wild and remote Buffalo River country, particularly in the Richard Creek valley. Additional information on both trails can be found in the Arkansas Adventure Guide available through the Arkansas Department of Parks and Tourism’s www.arkansas.com website. 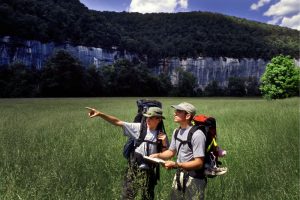 Serious outdoor adventurers will want to explore the Congressionally-designated wilderness areas along the Buffalo River. The Ozark National Forest and the Buffalo National River manage a combined 13,300-acre Upper Buffalo Wilderness that includes bluffs, caves, waterfalls, and the river’s headwaters. Downstream is the 11,300-acre Ponca Wilderness with such highlights as Hemmed-In Hollow, Indian Creek, and Big Bluff. Near the river’s confluence with the White River is the Lower Buffalo Wilderness Area, a 22,500-acre unit next door to the 16,900-acre Leatherwood Wilderness of the Ozark National Forest – which together form one of the largest and most remote wilderness areas in the eastern half of the country. Popular with both backpackers and horseback riders, this area is perfect for those truly wanting to get away from it all.

I’ll close with a reminder that good food can be found near the Buffalo. Coursey’s Smoked Meats (on U.S. Highway 65 south of St. Joe) has long had a reputation for delicious sandwich “fixings.” Many customers will then enjoy a picnic at Tyler Bend just a few more miles to the south. In Jasper, I’ve frequently eaten at the Ozark Café and Arkansas House – and have never been disappointed. A few miles to the south on Scenic Arkansas Highway 7 is the Cliff House Inn and Restaurant, home of the celebrated Company’s Comin’ pie. A dozen or so miles northwest of Jasper on Arkansas Highway 74 is the quaint but delightful Low Gap Café where the Bottini family serves a nice selection of outstanding Italian dishes. Don’t be surprised if a few horses are tethered out front!

Photography courtesy of the The Arkansas Department of Parks and Tourism