‘The Chicks’ to Take Stage at Walmart AMP 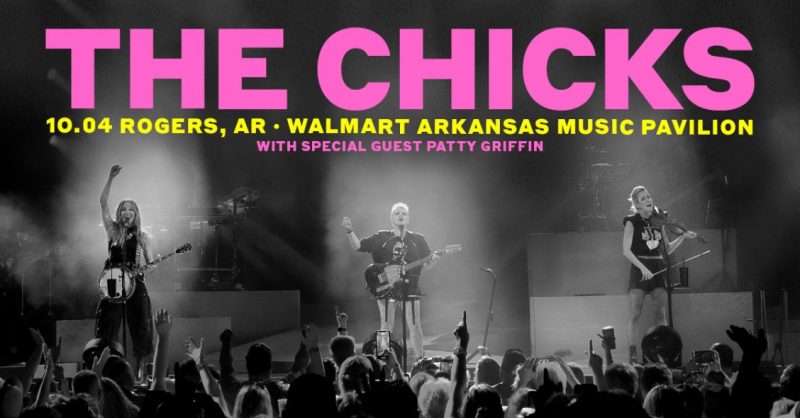 Country music group The Chicks recently announced five new October dates for their The Chicks Tour, including a stop in Northwest Arkansas at the Walmart AMP on Tuesday, Oct. 4.

As the biggest-selling U.S. female band of all time, The Chicks have sold more than 30.5 million albums. The group released their fifth studio album, Gaslighter, in July of 2020. The Chicks have received numerous awards throughout their career, and their 2006 album Taking The Long Way won five Grammy Awards, including Album of the Year, Record of the Year and Song of the Year.

Singer/songwriter and two-time Grammy award winner Patty Griffin will join The Chicks Tour as support for the show, which is a part of the Cox Concert Series.

Four additional show dates were announced, including stops on Oct. 5 at The Zoo Amphitheater in Oklahoma City, Okla.; Oct. 8 at Cynthia Woods Mitchell Pavilion in Woodlands, Texas; Oct. 10 and 11 at The Pavilion at Toyota Music in Irving, Texas.

The Walmart AMP (Arkansas Music Pavilion), located in Rogers, has the largest outdoor stage house in Arkansas. The venue has presented concerts since 2005 with headlining artists from all genres of music.