The City of Progress: Pine Bluff Lives Up to its Motto 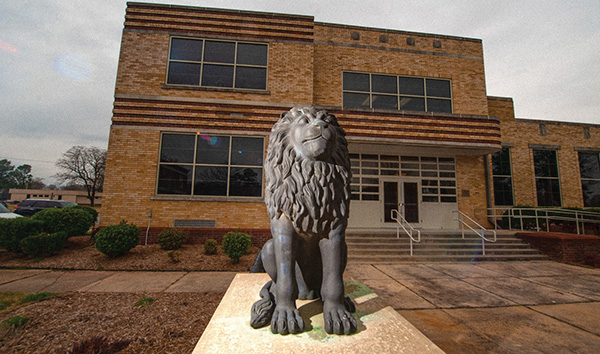 Early in the summer of 1819, a flood on the Arkansas River inundated the few isolated settlements along the stream in southeast Arkansas. Among the original pioneers displaced by high water was a hearty soul named Joseph Bonne. According to the definitive 1941 book, Arkansas: A Guide to the State, Bonne “took his rifle and a few possessions and paddled his canoe up the Arkansas [River] toward higher ground. He pitched camp in a forest of giant pines, and after the water receded, found that he was perched on a bluff above a southward bending curve of the river.” On that land Bonne built a cabin, later brought his wife and small children to join him, and soon opened a trading post. That modest center of commercial activity grew into Pine Bluff, the Jefferson County seat and one of Arkansas’ most historic communities.

History is just one reason to visit Pine Bluff. The town contains more than 50 properties listed on the National Register of Historic Places, many of which can be seen in the Fifth Avenue Historic District or the Pine Bluff Commercial Historic District. Of particular note is the Arkansas Railroad Museum, which alone has a number of locomotives, rolling stock, or auxiliary items included on the National Register. Although presently closed due to the COVID-19 pandemic, this hands-on facility is worth a visit. A highlight is the St. Louis Southern Railway Steam Locomotive #819, a massive engine built by Cotton Belt’s Pine Bluff shop in 1942 and magnificently restored in the 1980s. 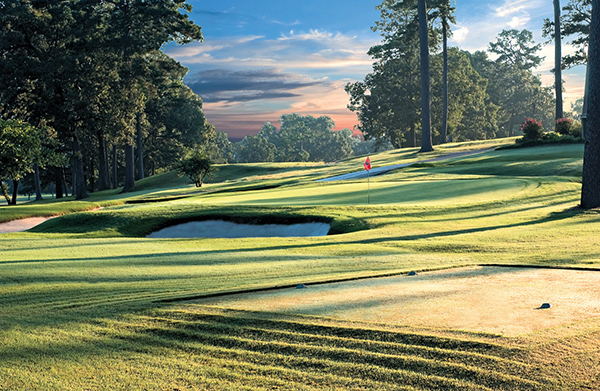 Clearly, history is a major reason that Pine Bluff ranks among Arkansas’ most fascinating cities. But there are at least half a dozen more that should be mentioned: nature, technology, education, sports, dining and entertainment.

Let’s start with nature, specifically the Governor Mike Huckabee Delta Rivers Nature Center, a kid-friendly complex owned and operated by the Arkansas Game and Fish Commission. Soon to celebrate its 20th anniversary, the center occupies 130 acres between Black Dog Bayou and Lake Langhofer. Hikers and walkers will enjoy the 2-plus miles of trails (about half of which are paved) that meander through a prairie, along a wetland and into the bottomland forest. Inside the visitor center are stimulating exhibits, a theater and two aquariums (together holding 22,000 gallons) that house fish and other aquatic creatures native to the area. Souvenir enthusiasts will appreciate the center’s gift shop. Located north of downtown at 1400 Black Dog Road, the Delta Rivers Nature Center can be reached by turning north off U.S. 65B onto Cecil Moseley Drive, then right on Black Dog Road. Admission is free. For information about hours during these strange times, visit the www.deltarivers.org website. 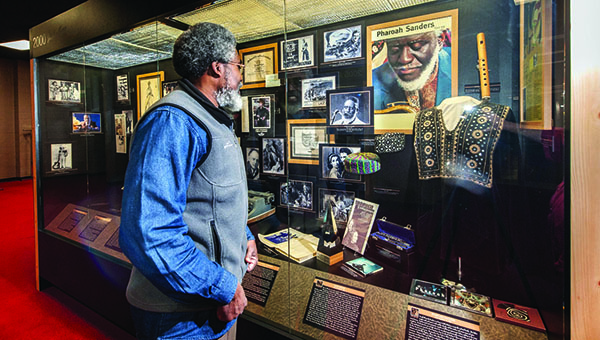 A second nature-oriented option for visitors to Pine Bluff is the Byrd Lake Natural Area, a 144-acre site owned by the Arkansas Natural Heritage Commission. The small oxbow lake, an offshoot of Bayou Bartholomew, is surrounded by an impressive stand of bald cypress trees. The paved hiking trail is relatively flat (wheelchair- and stroller-friendly), and leashed dogs are welcome. From I-530 on the city’s south side, take exit 43, and then travel north on Olive Street for about half a mile to Main Street. Turn right on Main and then drive roughly 0.2 miles to 52nd Street and turn right. Travel another couple of hundred yards, and the parking lot will be to your right.

Then, there’s the culture — and Pine Bluff has as much of that as any. Jimmy Cunningham is one of the focal figures behind the finding and telling of these stories, between his two hats as the interpretive coordinator for the Pine Bluff Advertising and Promotion Commission and the director of the Delta Rhythm and Bayous Alliance. Among many other avenues, his passions involve celebrating and creating interest in the city’s rich history of civil rights, music and cinema. One such example of this extensive web is how the blues music of Pine Bluff was influenced by slave runaways — the “social blues,” as he says — which is showcased at the new Freedom & Blues Exhibition. 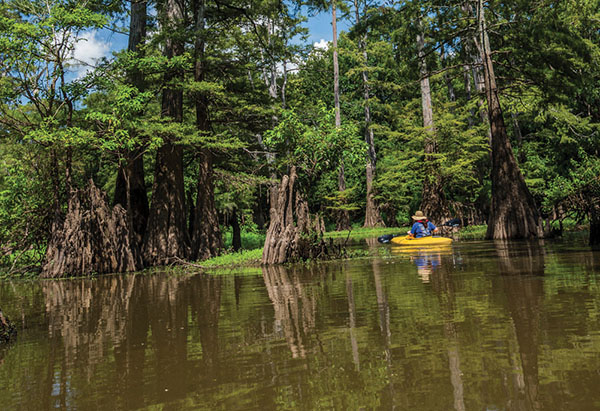 Cunningham’s organization was also responsible for enacting legislation in both Arkansas and Mississippi to create the Delta Rhythm & Bayous Highway, a cultural corridor between Pine Bluff and Greenville, Miss. It became the first interstate music highway in the entire country.

“Part of that is trying to build out the story of the music, the arts and the waters,” Cunningham says. “We’re trying to work with communities up and down the highway to develop out their story about music, art and their waters. In Pine Bluff, we’re doing a whole lot of stuff.” 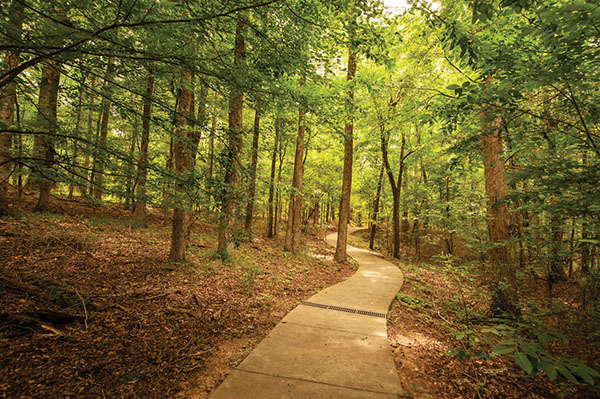 Another factor contributing to Pine Bluff’s prominence is technology. About 20 miles northwest of the city is the National Center for Toxicological Research (NCTR), a facility operated by the federal Food and Drug Administration (FDA). Once part of the U.S. Army’s Pine Bluff Arsenal, the 496-acre site houses a large number of buildings and laboratories where some 600 workers — to include many top-level scientists — are employed. Their responsibilities include determining the toxicity of various chemicals and pharmaceuticals, assessing risks of food contamination and identifying pathogens that could be used by terrorists. In recent years, the FDA has pumped several hundred million dollars into NCTR, making it one of the country’s leading research organizations.

Now, to education. Founded in 1873, the University of Arkansas at Pine Bluff (UAPB) is Arkansas’ second-oldest public education institution. A major player in the regional economy, the school was originally known as the Branch Normal College and was established during Reconstruction days to educate African-American students to serve as instructors in Arkansas’ Black schools. Renamed Arkansas Agricultural, Mechanical & Normal College in 1927, it joined the University of Arkansas system in 1972. The largest and oldest historically Black college or university in the state, it now has an enrollment of some 2,600 undergraduates and graduates. Given the importance of fish farming in southeast Arkansas, it’s no surprise that the school offers Arkansas’ only comprehensive aquaculture program to include a doctorate in the field. The University Museum and Cultural Center holds a large collection of fascinating ephemera chronicling the lives of those who helped shape the history of the university. Please check the website before visiting; the museum is currently closed due to the pandemic. 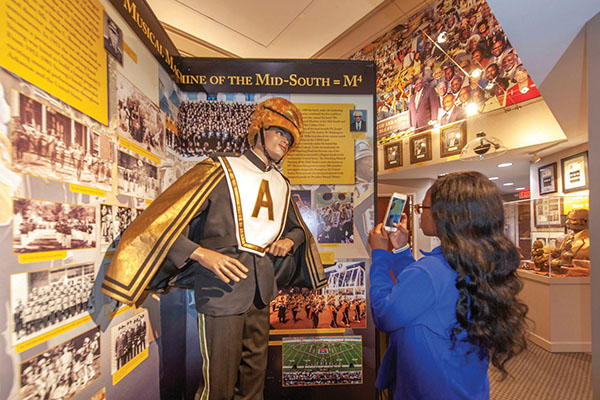 As for sports, fishing cannot be ignored. Serious fishing tournament fans might recall the 1984 Bassmaster Classic held on the Arkansas River near Pine Bluff. Not only did Ricky Clunn bring in a record catch (75 pounds, 9 ounces), two future presidents (Vice President George H. W. Bush and Gov. Bill Clinton) shared the stage with Clunn at the Pine Bluff Convention Center at the final weigh-in. The Arkansas River both above and below the city remains popular with largemouth bass and catfish anglers.

Golfers will enjoy Harbor Oaks Golf Club & Restaurant. The course, a charter member of the Arkansas Golf Trail, stretches a little over 7,000 yards with Tifton Bermuda fairways and Mini Verde greens. Harbor Oaks, conveniently situated on the north side of town, has been recognized as one of the top 10 public courses in Arkansas. 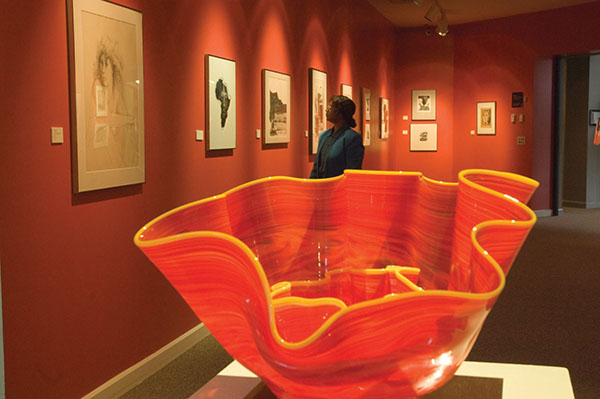 Likewise, Pine Bluff has several top dining locations, and I’ll mention a handful: The Colonial Steakhouse has been a local institution since 1974 and is known for its signature dessert, the black bottom pie. Leon’s Catfish & Shrimp Restaurant has also developed a devoted following. Meanwhile, fried chicken fans will do well to visit the Grider Field Restaurant southeast of town at the airport. RJ’s Sports Grill and Bar has been serving delectable southern favorites for a decade in the historic “Bank of Pine Bluff” building. Unique Cakes by Miss Margaret is the place for handcrafted desserts, while next door is another local favorite, Indigo Blue Coffeehouse.

Which brings us to entertainment. The Art and Science Center for Southeast Arkansas has added a vibrant arts and events venue called The ARTSpace on Main to the community. This multipurpose renovation, located across the street from the center, was made possible by a $2.5 million grant from the Windgate Foundation. Only a couple of blocks to the east is the Arkansas Entertainers Hall of Fame. Housed in the Pine Bluff Convention Center, this free museum traces the history of the many talented Arkansans who’ve made a lasting impact on America’s entertainment industry. 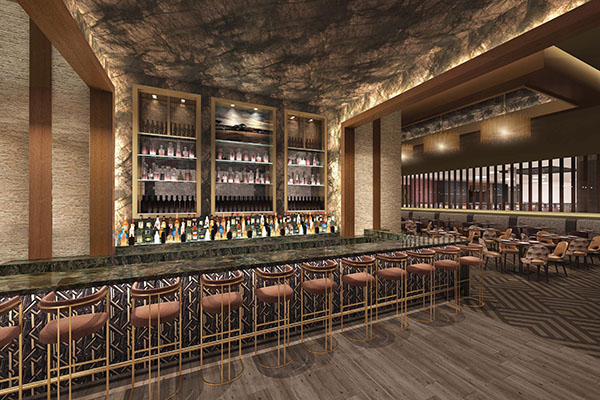 But the big entertainment news in Pine Bluff is the recent opening of the Saracen Casino Resort, a $350 million casino, hotel and event project located on the east side of town at 3512 Market St. Opening just months ago with 2,200 slot machines, 35 gaming tables, six restaurants and its own micro-brewery, the casino already employs more than 800 folks. Construction on the convention center, a 16-story hotel and theaters should begin later this year. Owned and operated by the Quapaw Nation of Oklahoma, the resort’s dining operations incorporate a “pasture to plate” theme, using beef and buffalo from the tribe’s own herds. Delta Farms, one of the dining venues, features Arkansas grains and produce. Todd Gold, a name well-known to Arkansas foodies, is the resort’s food and beverage director and is eager for his many friends to check out the various culinary possibilities.

As one might expect, Sheri Storie, director of Pine Bluff’s advertising and promotion commission, is delighted with Saracen’s opening. “Our railroad museum attracts visitors from around the world,” she says, “and the Entertainers Hall of Fame is the only one of its kind in the state. Saracen is one more reason to come and explore Pine Bluff.” 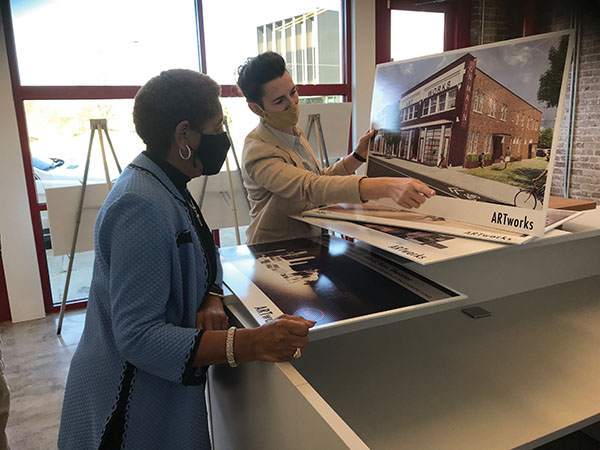 Mayor Shirley Washington has a bold vision for the continued forward progress of her city.

Likewise, Mayor Shirley Washington is pleased with the casino project, noting that it’s providing critical tax revenues and important jobs for the city. But she also is proud of the brand new Pine Bluff/Jefferson County Library, the city’s $12 million aquatic center (with its kiddie pool and two-story waterslide), a new community center opening next month and ambitious revitalization plans for downtown. Modeled on the success of North Little Rock’s Argenta District, the downtown transformation will include an 84-unit apartment complex, mixed-use developments, restaurants, wider sidewalks, streetscaping improvements (“I’m a landscape nut,” she says), and possibly even a downtown school. She’s also a vocal advocate for Pine Bluff’s parks, working with a regional consulting firm on a system-wide master plan. The parks should, in her words, serve as “neighborhood centerpieces,” but many are in need of major upgrades.

The city’s close ties with UAPB is another thing that Washington appreciates, particularly the strong working relationship with Chancellor Laurence B. Alexander. Citing the success of workforce programs, she hopes to develop new partnerships with the university that will help adolescents establish goals and move forward into productive lives.

Washington, a Jefferson County native (she was born in Gethsemane), is now entering her second four-year term. A retired public-school educator/administrator, she is the first African-American woman to serve as Pine Bluff’s mayor and enjoys the role. 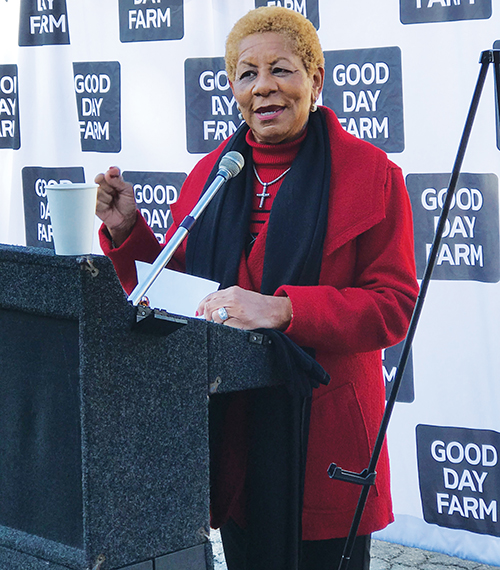 “I’ve always had a service mentality,” she says, “wanting to help others. I really like the fact that I can connect with so many people from all walks of life.”

Her vision for Pine Bluff? “A glowing, prosperous community that will attract many people looking for a place to call home.”

Pine Bluff, with Mayor Washington at the helm, seems to be on the right track.

With Valentine’s Day fast approaching and some of AY’s readers perhaps struggling for gift ideas, I’ll conclude with a mention of Sissy’s Log Cabin. Now Arkansas’ largest independently owned jewelry store, it began more than half a century ago when Sissy Jones rented a log cabin on the edge of Pine Bluff for $50 a month to sell antiques. Now located at 2319 S. Camden Road, the shop’s ambiance has more of a 21st-century flavor.

Visit explorepinebluff.com to see for yourself what makes Pine Bluff a worthy destination for your next in-state adventure.