The Convergence: Fort Smith, an Arkansas Arts and Music Mecca

[dropcap]F[/dropcap]or the past two years, the Peacemaker Music Festival and The Unexpected art event have coexisted peacefully but separately – the latter coming around Labor Day weekend while the former stood strong in June. But last year, their respective organizers had an idea – wouldn’t it just be easier if we combined the two? Now downtown Fort Smith is looking very, very cool during the weekend of July 28-29.

While the Unexpected officially runs from July 23-30, it will culminate during Peacemaker Music and Arts Festival as musical acts like Jamey Johnson, Gov’t Mule and Hayes Carll rock out in Riverfront Park, just off Garrison Avenue in Fort Smith. Other arts events will ride the wave of excitement that weekend as well.

For those who haven’t heard about the award-winning art event, The Unexpected brings international artists to paint public works in Fort Smith. They have recruited major stars like D*Face, Vhils and Maser to bring the aging, underappreciated infrastructure of the town to life with gorgeous murals and installations. The event is curated by JUSTKIDS, a group that curates art projects all around the world. While many smaller towns tend to showcase murals that illustrate history, The Unexpected works draw from the frontier days and Native American heritage of the area, but look vibrant, modern and beautiful.

According to Claire Kohlberg, one of the organizers of The Unexpected, teaming up just seemed like a win-win.

“Music and art always go hand in hand, and when we approached Peacemaker about doing a combined weekend they were very supportive,” she says. “It really balances out both events and maximizes impact of foot traffic. We gain new audiences by nature of the music audience and Peacemaker does by nature of the art audience. It seems like a unique way to have a summer event.”

Jeff Gosey, a co-organizer of Peacemaker, echoed her sentiments.

“We reach a local, regional and national audience with the level of talent we bring in [while] The Unexpected has an international reach,” he says. 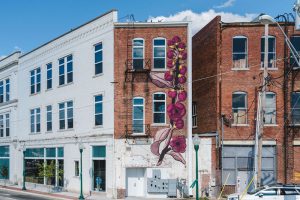 “Empty” by artist Pastel can be seen at 1100 Garrison Avenue.

As the name suggests, The Unexpected is not the sort of thing you’d imagine an Arkansas bordertown might have. But, Fort Smith doesn’t play by both of those rules.

The Unexpected has led to a resurgence in development in downtown along with regular music and performing arts events. Claude Legris, director of the Fort Smith Advertising and Promotions Commission, is quite pleased with the direction of community development and tourism.

“As with most communities, it enhances our ability to appeal to very diverse audiences and to demonstrate the new energy of our redeveloping downtown Fort Smith,” he says. “We’re convinced that once people experience this new energy, they will return many times to enjoy all of Fort Smith.”

Kohlberg remains tight lipped about what to expect from this year’s Unexpected, but promises that they’ll continue to surprise.

“This year people can expect to be introduced to unique spaces in Fort Smith,” she says. “On top of the traditional murals, we will have a handful of installations that will really up the ante for keeping things unexpected. It’s a nice blend of artists this year that work within different styles within the genre of urban and contemporary art that will keep things fresh.”

While both of these large events are garnering attention, they aren’t the only fun to be had in Fort Smith that last weekend of July.

Art on the Border will host its fourth annual art show featuring 32 fine artists and artisans at the Blue Lion Gallery & Event Center, located at 101 North 2nd Street. New artists from across the state will join regional artists in presenting many styles of paintings, pottery, hand-blown glassware, jewelry, baskets, ceramics and so much more. All are available for purchase and the funds raised benefit the Donald W. Reynolds Cancer Support House, U.S. Marshals Museum, and The Center for Arts and Education in Van Buren. The opening show is open to the public from 10 a.m. to 5 p.m. Saturday, July 29.

The River Valley Artisan Market will hold a special event from 11 a.m. to 5 p.m. June 28 and 29 at Ross Pendergraft Park. The event features handmade items crafts and artisanal items, all created by the vendors themselves. They’ll have food, live music and demos from potters and glassblowers. Usually, it takes place the first Tuesday of the month, but co-organizer Elizabeth Fayhe wanted to take advantage of the special weekend to showcase some of Fort Smith’s finest artisans and craft makers.

“We love the growth in the artist community that has been brought to Fort Smith by The Unexpected,” she says. “We want to show that there are amazing, talented local artists here as well. If someone has never been to the River Valley Artisan Market, you can expect everything from fine art to crafts and henna tattoos.”

Fayhe is not the only one who thinks this is the ideal weekend to be in Fort Smith. Legris believes it’s the perfect time to visit and offers a unique experiences to locals and visitors.

“This broad range of visual and performing arts will give both local citizens and visitors an opportunity to experience some of the very best artists in the world,” he says. “The Unexpected has brought international recognition to Fort Smith, the Peacemaker Music and Arts Festival includes a wide mix of musical styles and the Art on the Border event will feature works by the very best artists from around the state. Additionally, our Artisan Market will feature a variety of vendors from the River Valley. In fact we are telling people that visiting downtown that week will be like going to art heaven.” 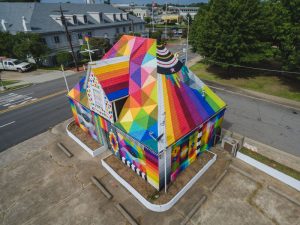 “Universal Chapel” was created by Okuda San Miguel and can be viewed at 1300 Garrison Avenue.