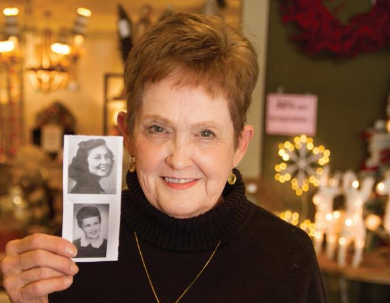 Arkansans are among those nationwide who are discovering their “roots,” if it were, with DNA tests available to the general public and databases made for fact finding. These are a few of the stories they share with AY About You about the experiences of putting the pieces together.

Ambition and embarrassment. Those are two of the motives of the cross-country jaunt for Sally Bickler (not her real name). The year was 1944. Embarrasment over her pregnancy from a rape at age 18 and ambition to get back to Los Angeles to be a dancer. Now at 94, she never thought her secret would get out.

It was in the spring of 2019 when Pat Denton of Conway spit into the tube that would tell her the answer to the question she’s asked for 75 years, “Who is my mother?” She got the results back and was floored to learn about the journey Bickler took to come to Arkansas almost 76 years ago to quietly birth her and surreptitiously go back to California.

The acting bug bit Denton’s grandson, Hart, a character on the cult classic TV show “Riverdale” which wooed him to Los Angeles. And it got him to thinking. He knew that his grandmother in Conway was aware she had biological relatives in L.A. which means he could have kinfolk there, right? And that a DNA test would tell him who they are, and they could probably have a big, fun family reunion. He was right. Sort of. He does have family there, but a reunion isn’t in the cards.

“I found a second cousin first,” the elder Denton says in recounting her fact-finding mission of her birth family. “I found one who was only 21-years old. I picked him (on the DNA report) because he’s young and knows how to research stuff,” Denton recalls. After that she was then able to piece together a few other things like her birth mother’s name and a photo, and she felt like a detective. She found facts — her mother was alive, goes to church every Sunday and the coup de grace, she doesn’t want anyone to know about their “secret.” Denton called her. She thought this would be the made-for-tv movie her son Dean, also an actor, and Hart could star in. But her mother wasn’t having it.

“She said to me, ‘Nobody ever knew anything about you, and I’d like to keep it that way,’” Denton heartbreakingly recalls of their phone encounter. Denton wrote her a letter to tell her that she was raised by wonderful people in McGehee, Ark., was a regular church attender, married the love of her life and “has three handsome and wonderful sons and 10 of the most beautiful grandchildren.” She wrote, “I’ve increased your tribe.” But again, no reciprocation.

Then she found out the details to her birth. A rape produced the pregnancy which urged Bickler to get on a bus in southern California and come east. She was three months pregnant and finally arrived in Fort Smith. It took her five months to get to Arkansas because she had to stop along the way and work to earn money. She found a family to take her in, and it was likely the physician who delivered her. “She did tell me that she didn’t look at me when I was born because she knew she couldn’t give me away if she did,” Denton says. Denton has two biological brothers her mother told her never to contact. And guess what line of work they were raised in? Community theater. That’s where those Denton boys (along with other grandchildren) get their acting skills, because Bickler had to be one all of those years she pretended she didn’t have a daughter. 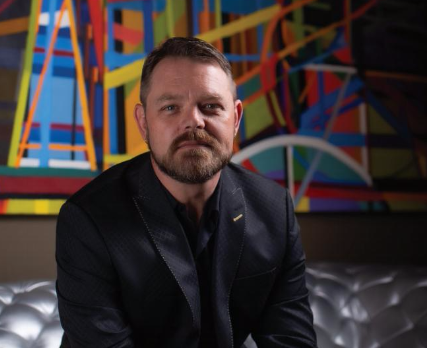 For 43 years, Katherine Sykes (not her real name) wondered where her firstborn child might be. Who adopted him? What does he look like? Where does he live? Last February, she opened up myheritage.com to see if there was a match to her DNA. David Bevans of Little Rock says he had done the test for 23andme.com, but only cousins were found. He was advised by one of those cousins to  upload the raw data to myheritage.com and was shocked when he received a message from a 61-year old Texan who would be his mama. Bevans says, “The next day I was at my computer and found out my mother had found the match.”

Sykes was a teenage mother who never told the father she was pregnant. The father was a married man in 1975 and to this day doesn’t know of his son, who’s a successful business owner in the capital city. “She sent me 43 birthday cards for every year that she missed,” Bevans says.

Bevans waited until his 40s to pursue his lineage. Respectfully, he wanted to honor the people who had adopted him while they were alive. He was adopted by Jane and James Bevans, DDS, in the 1970s. Dr. Bevans was one of the first pediatric dentists in Little Rock and died suddenly four days after his mother died in 2017. The younger Bevans says that Jane Bevans never kept his adoption a secret. “I was always told that the first time she cradled me she told me,” he fondly remembers. He says there is no doubt he was well loved by both his adoptive parents. But Christmas 2019 was the first time he was able to exchange Christmas gifts with the woman who birthed him. Bevans is one of the owners of Legacy Wine & Spirits. It is safe to say that inebriants were involved. 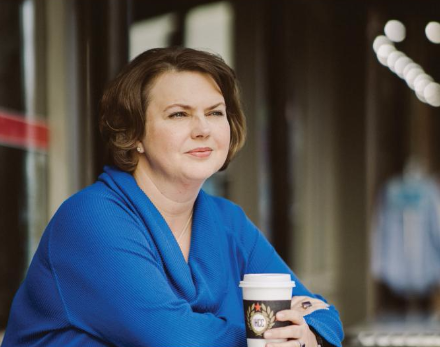 Nicole Sutter Murphy has a different story. She had no idea she was adopted. Until that fateful day in 2016 when she was dropping off her DNA test to pinpoint some health concerns her child’s pediatrician had about one of her children. She was taking her mother to radiation treatments when they were stopping off at the post office in Chenal Valley in Little Rock. She flippantly turned to her mother and uttered these words, “Speak now or forever hold your peace.”

Silence. Awkward silence. “I could tell something had happened. My mother cryptically said, ‘The results are not going to be what you think.’” After a short drive home, her mother blurted out the clincher, “You’re adopted.”

Then, the 31-day wait began. That’s the approximate time it takes to receive results from a DNA-spit test. The market leaders are Ancestry.com and 23andme.com. The accuracy of these saliva tests, according to manufacturer Puritan Medical Products, is the same as blood work. The website says, “Epithelial cells [spit] contain exactly the same DNA as blood cells. In other words, these swab tests are more than 99.9% accurate, which is the same in case of blood samples as well.”

The marathon of sleuth work began. Murphy went online to find adoption search angels — people who work as volunteers to reconnect parents with children or vice versa. She hardly knew much information. She knew San Francisco was the city she was born in. She knew (of course) her birth date. And she knew the hospital where she was born but found out during the search that the hospital had three babies given up for adoption on that same day.

Was she curious that there were never photos of a pregnant mother like her friends might have? Murphy always had her suspicions, but she was always told she was her adoptive mother’s “mini me.” Yet, nothing about her resembled her mother. Murphy is 5’6”, the mother 5’10”. One has blue eyes, the other green. 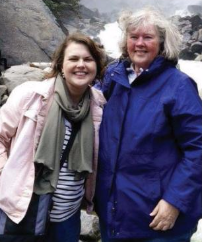 Murphy and her biological mother in California after she flew to meet her for the first time.

Within seven days of dropping off what she thought was benign medical information, the search angel helped her find her birth name and “helped me write a letter to the state of California requesting” some other information. Murphy adds, “[The search angel] went through yearbooks online to find pictures of the people she thought might be my birth parents. She was absolutely correct about my birth father. Too many Jensens (her biological last name) in Fresno for her to get the birth mom right, but I remember catching my breath when she sent me [my dad’s] yearbook photo before I ever had DNA results. Those were my eyes and eyebrows.” She says that her kids have those eyebrows, too.

Murphy found out (after all this drama) that her child doesn’t have the condition that caused the DNA investigation. She is convinced that this was part of the big plan to find her people and just one of many “God winks” she encountered.

READ MORE: If We Could Turn Back Time