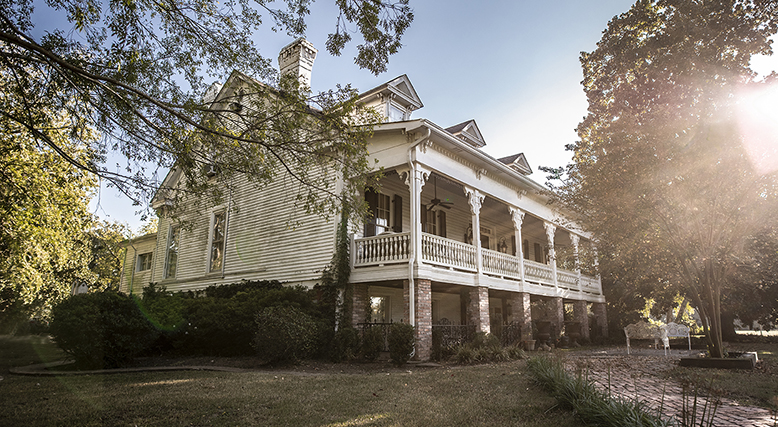 By Chris Price | Photos by Jamison Mosley
In Requiem for a Nun, William Faulkner famously wrote, “The past is never dead. It’s not even past.” Though the quote was written about the novel’s protagonist, it just as easily could have been written about The Elms Plantation.
The home, located just south of Altheimer, about 15 miles northeast of Pine Bluff, has an amazing 152-year history. It was built just after Grant and Lee made peace at Appomattox Courthouse and stayed in the same family until the Great Depression. It was bought by a Chicago lawyer, then returned to a descendant of the original owner and has remained in the family since.
Today, the historic plantation house in rural Jefferson County is situated in the middle of a 6,000-acre farm. It is the centerpiece of The Elms Grand Prairie Waterfowl Lodge, the largest woman-owned and operated commercial duck hunting business in the South. 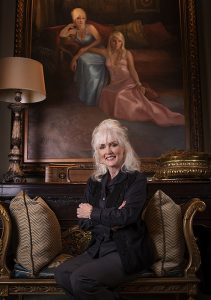 Family Legacy
The Elms Plantation was constructed in 1866, a year after the Civil War ended. It was built by Dr. Samuel Jones, who moved with his family and 150 slaves to Arkansas from Mississippi in 1857. He acquired and cleared 500 acres of timberland. Using oxen and mules to carry materials from the Arkansas River and bricks made and fired on site, Jones built the wood-frame, Louisiana Acadian-style center hall home as the crown jewel of his sprawling cotton plantation.
The home stayed in the Jones family until the Great Depression, when it was sold to Ben J. Altheimer, an attorney born in Pine Bluff in 1878 who moved to Chicago in 1910 and went on to establish one of the Windy City’s most prestigious law firms. Altheimer kept farming interests in the town named for his father and uncle and hired Richard S. Barnett, Jr., a descendant of Jones, to run his planting operations. During World War II, German prisoners of war were housed at the plantation and worked its fields. When Altheimer passed in 1946, Barnett bought the plantation and made it his family home for 46 years. Under the Barnett family’s stewardship, it was added to the National Register of Historic Places in 1978. In the 1990s, the home passed to its current owners, Barnett’s grandson Armistead Freeman, Jr., and his wife, Kim.

Past & Present
The Elms is situated on 40 picture-perfect acres in the middle of the Freeman family farm. Upon entering its gates, time seems to slow to a near stop. A canopy provided by a pecan grove shades the entryway, and the expansive yard is shaded by soaring magnolias, majestic oaks, and, of course, elms. From the outside, the cotton-white plantation house appears to be a raised one story, with attic space under a pitched roof that features three dormers on each side of the front and back of the home. A covered porch that stretches the length of the home’s front is an inviting place for afternoon tea or evening cocktails.
“It’s a very rare style for Arkansas,” Kim Freeman says. “It looks like it’s straight from New Orleans. You don’t really see homes like this anywhere here.”
The porch overlooks a 16-acre, crystal clear lake, stocked with bass, crappie, and catfish and dotted with lily pads as big as 24 inches in diameter, which lies next to the plantation house.
Upon entering the home, the floorplan is revealed to have two stories atop a semi-basement, all connected by solid walnut staircases. Vestiges of its past occupants and its place in history appear throughout the home. The main floor’s tin-panel ceilinged center hall leads to bedroom suites named for owners of the home and a formal living room decorated in shades of steely blue. It is filled with antiques and furniture spanning the home’s existence, as well as paintings of the women who have called the Elms home. Upstairs are two additional bedrooms that stretch front to back, from dormer to dormer. The bottom floor has the main dining room, kitchen and a cozy, wood-paneled trophy room, adorned with bookcases and mounts of a bull moose, caribou, lioness, white-tailed deer, various fish and a variety of ducks, serves as a modern den. Burnt umber-colored hardwood floors run throughout the house. 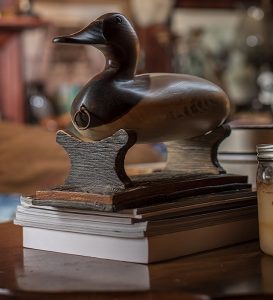 Duck Lodge
While the Elms served as the Freemans’ home for a decade, they moved to Little Rock in the 1990s and used the plantation as the perfect Southern setting for weddings, receptions, group retreats, family reunions and other events. In 2001, Kim Freeman took over operations of the farm and decided to turn away from hosting demanding special events. Positioned in the heart of Arkansas’ duck country on the Mississippi Flyway, duck hunters asked the family to lease the land to hunt, and she decided to embrace the plantation as headquarters for a waterfowl hunting operation.
“Our land naturally had the ducks,” she says. “They’ve been here for generations, so I thought, why not? It was just kind of a no-brainer. I was raised on a farm not far from here. It’s what I’d always known, but when I went into the duck hunting and the lodging aspect, I just loved it.”
The Elms maintains a happy balance between agriculture and wildlife management practices. Dispersed among the farm’s cotton, rice, soybean, corn and millet fields, are hunting sites ranging from 20 to 300 acres. The fields contain some unharvested crops, post-harvest waste and indigenous barnyard grass and smartweed, which draws huge numbers of migrating and wintering waterfowl. 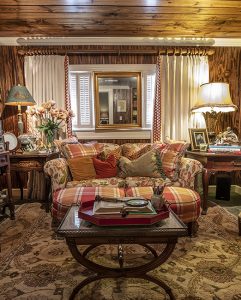 “Our fields are designed to be a natural habitat for waterfowl,” Freeman says. “We have six permanent pit blinds and numerous other skid blinds on these fields.”
The Elms offers hunters 12 distinctively different lodges on the plantation grounds or nearby farmland, which range from luxurious, five-star facilities to smaller, more rustic accommodations that may be leased for the full duck season or overnight rentals. Lodging packages include a continental breakfast before the morning hunt, brunch following it, and evening cocktails, hors-d’oeuvres and a gourmet dinner in the plantation house dining room.
This past summer, Freeman hired Jason Perry to take the “Elms Experience” to the next level. Perry has 22 years of experience designing and branding outdoor apparel brands. He is working with Freeman to develop a sportsman’s village centered around a lake-side pergola with grills and fire pits and an on-site company store with custom designed outdoor apparel and accessories.
This season, the lodge is adding fully-guided, three-day hunts for a minimum party of four, and will have limited-availability for two-day hunts for two hunters or more. Freeman plans to construct a new 4,500 square-foot, full-service lodge that will be ready for occupancy beginning next year. 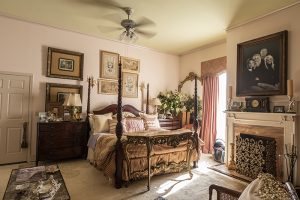 The master bedroom at Elms Plantation.

Protecting the Past
As a girl, growing up on a cotton farm in nearby Wabbaseka, Freeman used to venture down to nearby Altheimer, where she marveled at the sight of The Elms.
“I was, like, in third grade, and I remember I used to look across the fields and the lake and wonder what princess lived there,” she says.
Of course, she didn’t know it at the time, but she would eventually be the home’s owner and caretaker.
“Growing up near Altheimer, the Elms Plantation was a big deal,” she says. “I think about Dr. Jones and wonder how many years it took to make it all happen? To know that a home like this has lasted for over 150 years, it’s just really incredible. You think about going back into the 19th century; there wasn’t necessarily a fire department. So if something happened, it could have been gone in an instant. It’s just amazing that it’s still here, that it’s still going, and it’s a livable house.
“You hardly see homes passed generation to generation anymore,” she adds. “I love it and feel that love every day when I come through the gates. It’s just a special property. I’ve never been able to really leave it. It’s my heart and soul, and I hope it will continue to be a legacy that lives far beyond me.” 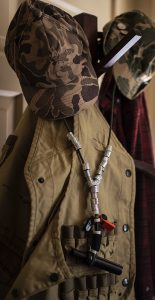