The Fifth Season: Navigating the Return of Seasonal Depression 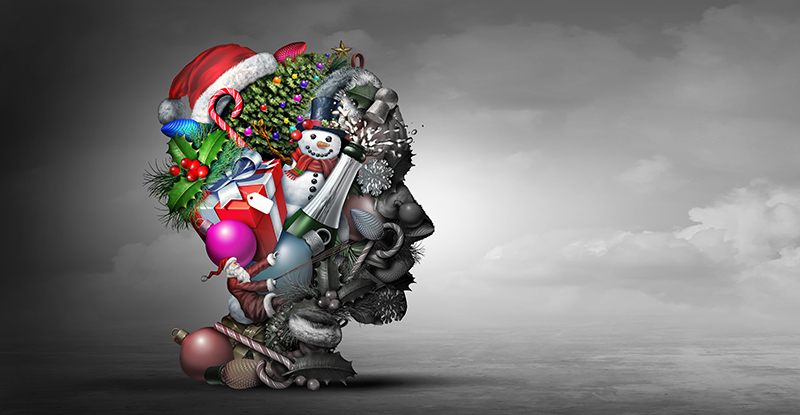 The Fifth Season: Navigating the Return of Seasonal Depression

As the temperature drops, songs become cheerier, the sun sets earlier, and the anticipation of the holidays begins to rise, seasonal affective disorder (SAD) — known commonly as seasonal depression — also begins for about 5 percent of adults, according to the Cleveland Clinic.

The holidays bring joy and excitement to the lives of many, but along with the exhilaration surrounding the holidays, there’s also less light, typically more sleep, loneliness and, for some, financial burden. All of these factors can impact mental health, creating less than ideal situations.

While SAD is a form of depression, there are many environmental causes that lead to the condition. The Cleveland Clinic lists biological clock change (your body’s internal clock that regulates mood, sleep and hormones), brain chemical imbalances (such as serotonin, a “happy” hormone, levels dropping), vitamin D deficiency due to less sunlight, natural melatonin boost or the overproduction of melatonin and negative thoughts, often from stress and anxiety, as reasons for SAD occurring.

“Think of SAD like a bear in hibernation; [it] might feel like right after work you want to jump into PJs,” English says. “You see yourself in more of a hibernated state — more of this can lead to a toll on people mentally.”

English explains some of the key symptoms of SAD to watch for, not only in yourself but also in your family, are increased cravings of carbs, late-night eating and lack of exercise.

According to the Mayo Clinic, it is normal to have periods of time when you don’t feel like your usual self, especially with outside stressors. However, English emphasizes the importance of being self-aware and noticing when patterns arise.

“The first step is recognizing signs and looking for the patterns in your own behavior. [People] might start to think, ‘I don’t feel great around this time,’ but don’t take the time to recognize [their] own patterns, and recognizing patterns is so important,” English says. “If you start seeing patterns year after year where you notice mood changes in the winter months but return to a more positive mood in the spring and summer and have experienced this for two or more years, you may be experiencing SAD.”

Self-awareness can be difficult for many, but English lists a few components for reflection. Since there is a genetic component to SAD, it is important to ask your family members if they notice any particular changes around the holidays. It’s also advisable to check in on your eating and sleeping habits by asking yourself what time you’re eating, what quality of food you’re eating and how much you’re sleeping.

Arkansas consistently ranks among the most depressed states, ranking the fourth-most depressed state with a depression rate of 23.2 percent in 2021, according to the World Population Review (WPR). While there are many contributing factors to this, a large part may be attributed to the accessibility of mental health care. WPR ranks Arkansas 34th in the country in access to mental health care in 2021.

“Arkansas is in the top 10 for suicide. In general, our state struggles, not just with SAD, which is why we want access to mental health care,” English says. 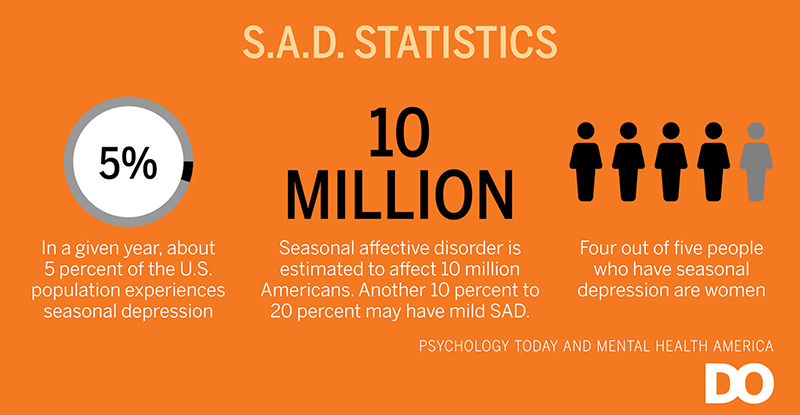 While the effects of depression can last for extended periods of time, the effects of SAD can impact people for months, making preventative measures just as important. Although you may not be able to control hormone production, there are things you can do to combat feelings of seasonal sadness.

“Let there be light!”

This is English’s No. 1 tip in combating seasonal changes. Being in the sun is an important part of mood.

According to the American Psychological Association (APA), soaking up as much sunlight as possible is important for everyone in the winter months. However, this can be a difficult task when taking into consideration the return to standard time and the consistently dreary weather. For this reason, English recommends purchasing a seasonal mood light.

“Light gives us light, and some people need light more than others,” English says, emphasizing the importance that simple sunlight can have on our moods. These lamps help in a phenomenon called light therapy. According to the Cleveland Clinic, light therapy works because it is about 20 times brighter than regular indoor light.

The Cleveland Clinic also includes that, while light therapy is a great option for some, it can produce risks for others. Light therapy tends to be contraindicated if you suffer from diabetes or retinopathy, take certain antibiotics or anti-inflammatories, or have bipolar disorder. For some with bipolar disorder, intense light can trigger mania.

While summer is typically the ideal time of year for many Americans to vacation, English has a different suggestion: a winter vacation. 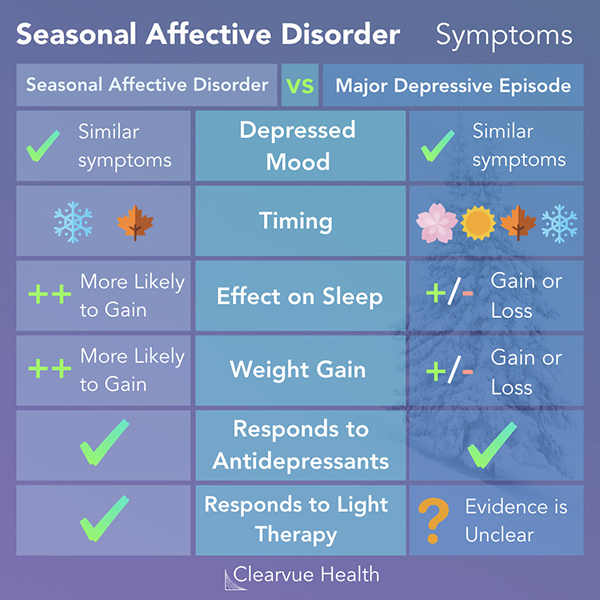 “Another preventative measure I urge is to make plans and follow through with them,” English says.

Not only is planning a vacation a good way to look forward to something, but it can also be helpful to spend time somewhere sunnier when you’re feeling the impact of sterile weather.

However, a vacation isn’t the only way to create a future of excitement — even small plans can create a sense of elation.

“I know we’re in a time where we’re kind of coming out, or might be coming out, of a pandemic, so plans may seem daunting, but make little plans to look forward to — whether it be meeting a friend for coffee or waking up with the plan to enjoy your morning coffee,” English says. “If you’re not comfortable throwing all precautions to the wind, find little things to look forward to.”

English also offers the advice of decorating to make your space happier — whether it’s for the holidays or year-round — meditating, eating healthy and balanced meals and exercising, even if you don’t feel like it. All of these are in addition to the advice to see a therapist to treat SAD.

“[We all should] add some things to schedules to bring joy and look forward to them,” English says.

In addition to these suggestions, the Mayo Clinic also suggests making comfort foods healthier in order to avoid the tendency to overindulge on carbs, spending time with family to lift spirits and creating a schedule in order to stay active.

English also stresses the importance that treatments are not “one-size-fits-all.” Different things work better for different people. For some, medication is needed during these times. “In more severe cases, people could seek help year-round or take prescribed medication,” English says.

Major depressive disorder, or depression, can also have seasonal impacts. So for those already struggling with depression, the winter can be a particularly difficult time. According to the Mayo Clinic, while the symptoms of depression and SAD are the same, the defining difference is the return to normalcy of those with seasonal afflictions after the winter months.

SAD is commonly associated with the winter, but according to the APA, it can also arise with a summer onset, meaning some may experience seasonal depression in the spring and summer months. This form of SAD is often referred to as summer depression and has almost inverse symptoms of winter-onset SAD, including insomnia, poor appetite, weight loss, agitation and anxiety. This only further stresses the importance of checking in on yourself and taking note of changes you experience in mood around the year — as advised by English.

SAD must be diagnosed by a licensed professional. For more information on mental health services visit humanservices.arkansas.gov.