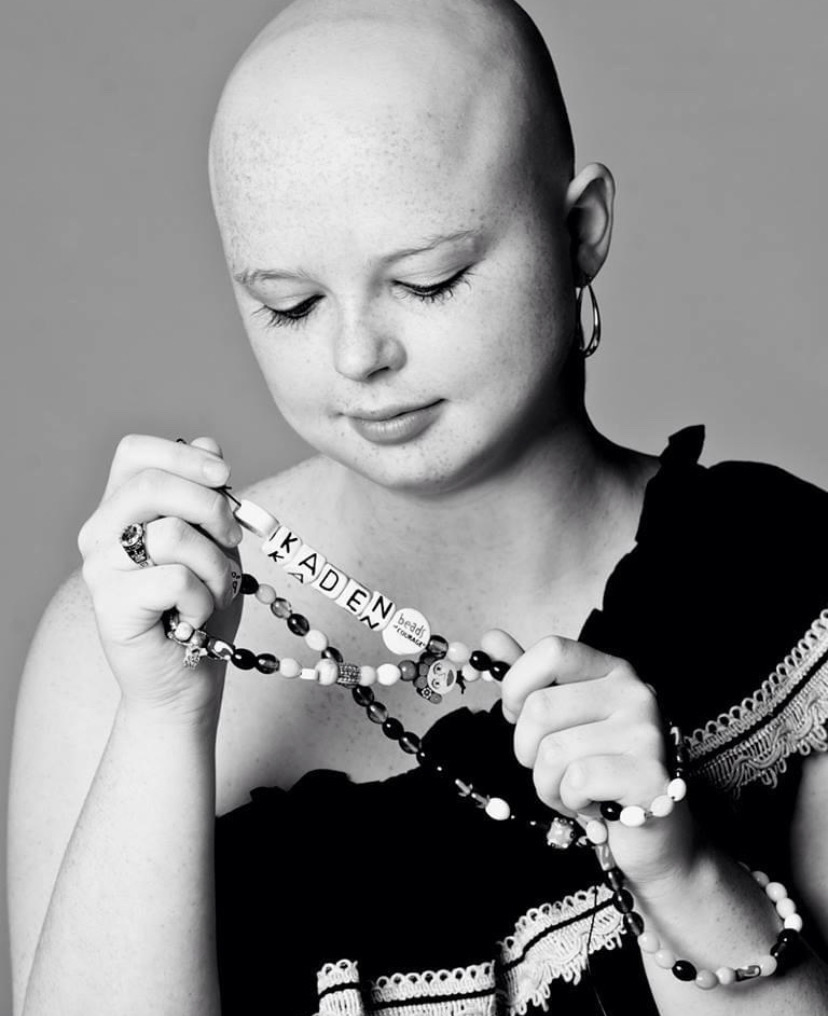 Kaden Peebles was social distancing before social distancing was cool. For a 22-year-old who’s heard those dreaded words “you have cancer” three different times in five years, she has been wearing masks and gloves since 2015.

Peebles was a high school junior in a small town in southwest Arkansas, busy with cheering, the competitive kind with tumbling, flyers and expensive competitions, when a pain in her left hip kept her from some of her favorite activities. Peebles remembers, “the pain would come and go,” but it was obtrusive enough for her to finally go to a doctor. Her ebullient disposition kept physicians from really understanding how much discomfort she was in; they chalked it up to things that athletes deal with like maybe an IT band problem or a torn labrum. She figured she just needed surgery to alleviate the pain. But a doctor’s order of a magnetic resonance imaging (MRI) told the shocking news. Peebles had a fist-size tumor in her hip diagnosed as Ewing’s sarcoma, a rare type of cancer most likely in children that attacks the tissue or bone. The survival rate can be as high as 70 percent. But the treatment to find remission is a bumpy ride.

She started chemotherapy the first week in March of 2015. Proms are in April, right? Peebles wanted to go so badly that her oncologist, Kimo Stine, M.D., at Arkansas Children’s finagled her treatment so she could have good white counts (imperative for the opposite of social distancing) the week of prom. She ordered her dress online and proudly donned it knowing she would be the one at prom without hair. About 14 days after the first chemo treatment, she said goodbye to her beautiful tresses. On her terms. She reminisces, “The first night of my second round it happened, and it was huge clumps of hair that had fallen out. My mom cut most of it; I think that was harder than having it shaved for some reason. My best friend Maddi then just shaved the rest for me.” Her prom date, Matthew, surprised her by showing up with his head shaved. “I wore my wig for the pictures but took it off when we started dancing,” Peebles says. The girl has priorities. She wanted to look good for the photos but still have fun on the dance floor. 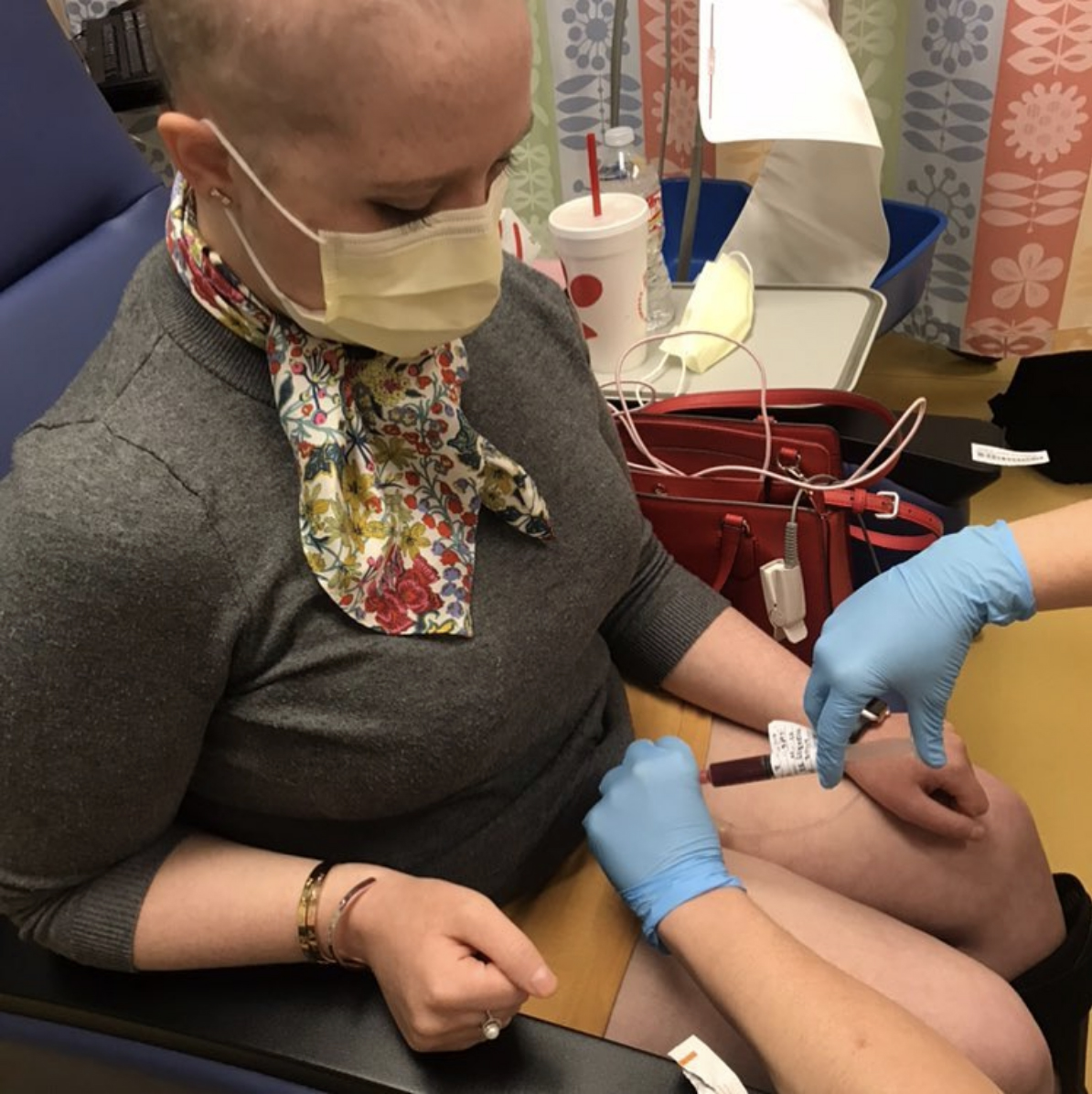 So what’s it like to hear the news of a malignancy when you don’t know how cruel the illness can be? Part denial, part childlike innocence. She remembers, “The day I found out, I went riding around with a bunch of friends because that’s what 17-year-olds do. My friends and I wanted cheese fries no matter what was happening in our lives. I had family who had cancer, but I didn’t realize what it meant.” That means she might not have understood the perils of the side effects of treatment, but she soon found out. She would spend the next five years in treatment and suffer hair loss and permanent nerve damage to her leg from it.

The next year, high school graduation allowed Peebles to get her diploma at Nashville High School, and some friends from Little Rock showed up. “My nurses drove two-and-a-half hours to come see me graduate. They sat with my family and surprised me, and I cried!” She says she’s more tender now about a lot of things. And she tends to dream more about her future.

Peebles’ mass was in a precarious spot on her iliac wing on her hip thereby preventing surgery. Her medical team felt radiation would be more effective. Plus, the time at Arkansas Children’s gave her friends on the hem/onc floor as it is called (hematology/oncology wing) who understand what she’s going through. Two come to mind. One is Asher Ray, who was a decade younger, and Peebles calls her “my Ewing’s soul sister — someone who encouraged me.” Asher was diagnosed with the same cancer at age three and succumbed to the cruel disease after five-and-a-half years of treatment. Peebles says, “I thought if she can do this, I can do this.” Then there was Keagan Provost who had brain cancer and had been sick “five or six years when I met him. We would sit outside each other’s rooms when we were the sickest and just talk to each other from the hallway.” Keagan, too, passed away. But Peebles insists, “Seeing others die is tough, but I don’t think that is the way I will turn out. I am very realistic but very aware. I am positive when I am taking treatment. I think, ‘this one is gonna get it.’” 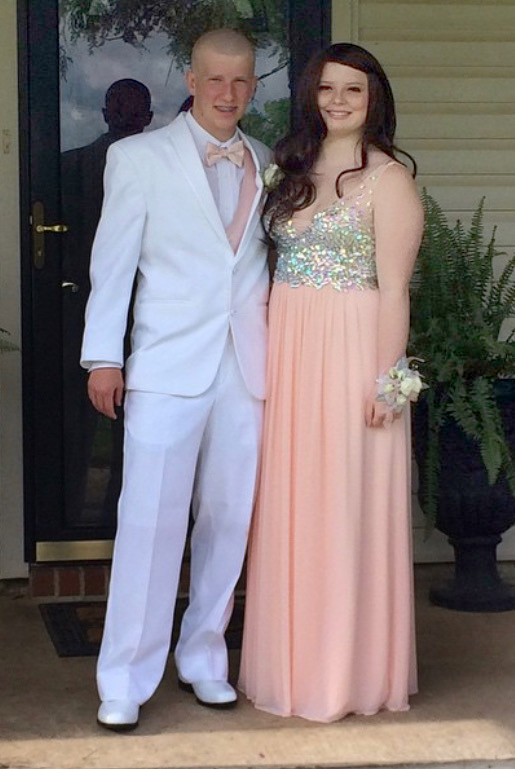 Kaden Peebles at prom (wig on).

She’s had that feeling for all three diagnoses. An obvious threat to cancer patients is secondary cancer from the treatments. Twice Peebles has been diagnosed with secondary acute myeloid leukemia (AML). And twice she has had bone marrow transplants. Bone marrow transplantation is a risky procedure with complications such as cataracts, infertility and even death. Peebles says, as if she were the physician herself, “We are always riding the line with my cancer: What is worse, cancer or treatment? That’s where we struggle with how much treatment to do.” But she adds, “I want to get married and have children. I do treatment so I can live. When you have that mindset, treatment is easy.”

Peebles is a junior at the University of Central Arkansas studying English education. She says, “I’m trying to live a normal college life. The only thing keeping it from being normal is when I have to go to the hospital.” And that has been for long stays in Nashville at Tri Star Centennial Medical Center where the transplants have taken place. Her team there is working together with Arkansas Children’s where she will always be a patient because she has a pediatric diagnosis. She isn’t positive what she will do after graduation in December, because her health comes first. She was just informed that her team isn’t going to continue treatment after all. That was good news. So that was 35 rounds of chemotherapy, total body radiation and two bone marrow transplants. All by before the age of 23. 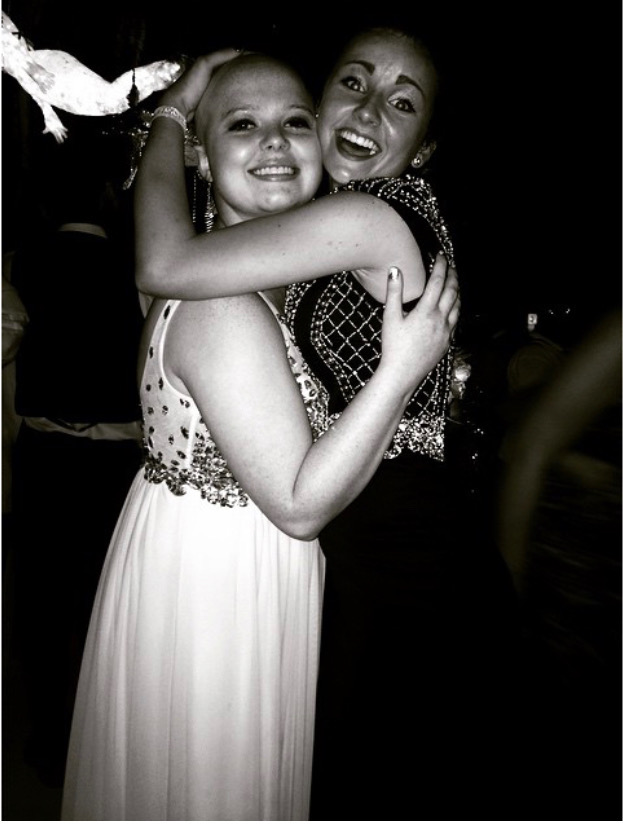 Kaden Peebles at prom (wig off).

Peebles credits not only her medical team at the two hospitals, her parents and brother and sister, but her faith in God to keep her going day after day. She says, “I have a huge faith in God. A big part of my life is I feel there is a reason I got sick; He wants to use me for this. This is my life, and I have to deal with it. My mom focused on getting me to remain positive.” But she says that she is “so grateful for my siblings because they make me stronger. They have a lot of empathy for me; they push me to get up and get out of bed.”

Peebles says that with each cancer diagnosis, there is a chance of recurrence. She says, “That’s not a concern of mine though, worrying that the cancer will come back.

“I don’t want to get my hopes up. It’s hard to hear because I have fewer options with each cancer. If a line of treatment doesn’t work then you have to move on. Relapse means the treatment option you chose didn’t work.”

Peebles says, “As a kid, I always wanted to be an adult.” And now that she is one, she has a message for all of us. “I want to encourage everyone to apply to the bone marrow registry. Both of my transplants were found through the registry.” Those anonymous donors saved her life, making her wonder: Whose life do you want to save?

If you are between the ages of 18-60, you can heed Kaden Peebles’ call to donate bone marrow in the event someone might need it. It is more likely that donors are between 18-44, but even the older ages can sign up for the bone marrow registry. There are certain medical conditions including several autoimmune disorders and/or blood disorders that could prevent you from donating. For more information on eligibility and how to get registered, go to www.bethematch.org. Sharon Bale, mother of the late Hardin Bale III, initiated a huge bethematch.org drive in 2010 for her son. As she likes to tell it, she “didn’t do the organizing, but it was the work of two local angels who rounded up the most donors in one setting.” How? You attach the Bale name (Central Arkansas family in the car business since 1912 known for their philanthropy), and people show up. Sharon and Johnny Bale’s son had just been diagnosed with leukemia when the family realized he needed a donor. Friends Bailey Newcomb Faulkner and Brooke McKnight approached bethematch.org for kits to swab attendees to the unprecedented event at Bale Chevrolet. Radio stations got involved, and nearly 2000 people were swabbed that day.

Sharon says, “I have been told that there were six matches out of that 2000-person sample. Even a couple driving through Arkansas on their way to Pennsylvania heard the radio ads and made their way to the dealership. And one of them was a match!” She continues, “This event wasn’t about Hardin getting a match, but it was the ability to help someone else.” Her son never found a perfect match for bone marrow, but instead was matched through an umbilical cord-blood match. He fought valiantly for nine years and died in September 2019.

Breaking the Mold: Lee Ann Jolly Succeeds in Academic and Fitness Fields
May 5, 2021
Go to Top
Never Miss An Issue!