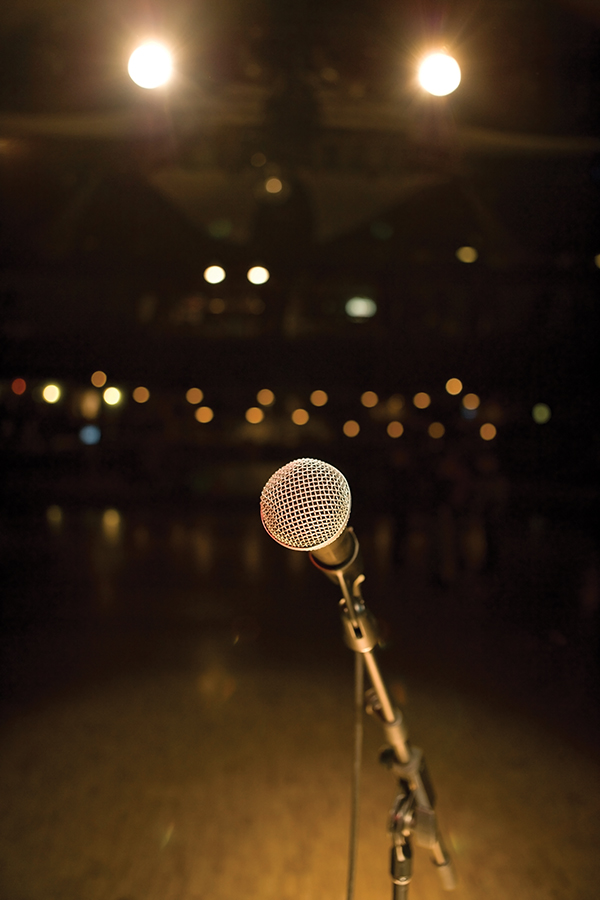 The Ghost Light: Since mid-March of last year, it has been on at the Walton Arts Center (WAC) stage. In the world of theater, this tradition is practical in its intent, providing light that enables a safe return to a dark stage. For performing artists and organizations, the Ghost Light has become, with the advent of COVID-19, a very poignant symbol.

The Walton Arts Center Ghost Light actually represents its two venues — Fayetteville’s venue of the same name as well as the Walmart Arkansas Music Pavilion (AMP) in Rogers. Both present touring performances, albeit differently — WAC being an indoor venue, AMP being an outdoor site. Together, the range and depth of the performances they offer have undeniably made them this state’s largest and busiest host of the arts. Before the brakes hit hard with the pandemic, a normal year would see WAC hosting about 200 public performances with the shorter season of the AMP being about 30 events.

As both COVID-19 and March rolled out, the most immediate events in Fayetteville had to be canceled and/or rescheduled. WAC’s leadership team rapidly went also in a proactive mode. They began modeling business scenarios, which proved to be frustratingly based on nothing but uncertainty. It was very clear, though, that a prolonged shutdown could be financially staggering.

But in June, that being 2020, perhaps AMP, they thought, would be able to honor its commitments to the artists, touring companies and ticket holders? At this point, the AMP was completing its expansion project. That proved to be ironic considering that it, too, would soon find itself being canceled out either by the organization or by the performance groups themselves.

In the midst of these dual shutdowns, WAC was still determined to pivot constructively. The first order of business was to figure out how to stay alive until normal activities could return. But how to do that when your primary source of income — ticket sales — is decimated? How do you take care of your employees and their families? And how would it be possible to continue to generate revenue for other businesses and individuals who depend on these revenues as their lifeline?

Here you see is where the Ghost Light became more than a tradition. It became a plan, a force of will to prevail for the good of all involved. WAC set up the Ghost Light Recovery Fund — a sort of GoFundMe, if you will. If successful, it could possibly provide funds for the continued employment of staff at the two locations, allow the venues to be physically maintained and offset losses until it could again be self-sustaining. It was a glimmer of light tossed into the darkness, but would it be seen? After all, the economic impact of COVID-19 would also affect many of the same people being asked for help. Would they respond?

“We have a great group of patrons,” says Jennifer Wilson, the publicity director for the Walton Arts Center. There is a great deal of respect and appreciation in her voice as she recounts how approximately 800 individuals and businesses raised $1 million by October to support the venues and all those they impact.

Like a torch, the light given to them by these donors would be, must be, passed on. Wilson says, “It really has become the heart of the WAC and [AMP] to evaluate the needs of the community right now and try to fill them.” As the shutdown eased, there was still much to be overcome with its replacement of COVID regulations. Time to, Wilson says, “rethink how we do it differently.”

How about expanding on the number of blood drives held since there was more space on the schedules? Besides the obvious benefit to the community, their blood drives offered a unique thank-you to the donors — live entertainment. It made for some happy donors too, as it served the dual purpose of providing work and income for some of the community’s artists. 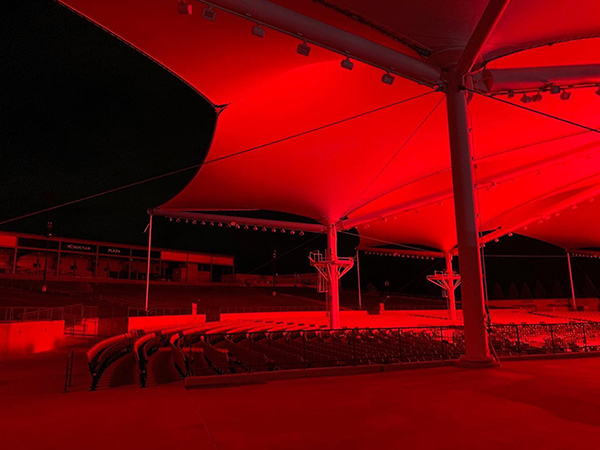 In September, the Walmart AMP went red, joining venues across the country in observing #RedAlertRESTART, supporting the extension of financial assistance for displaced workers.

The multiple series of the event known as “Happy Hours” had been created prior to last year by several local nonprofits to generate funds. It had previously been held elsewhere, but now the group and WAC agreed that the AMP’s new expansiveness was an unprecedented opportunity to hold the event while meeting social distancing requirements. In the series held in the fall, “Happy Hours” and their pop-up bars provided live entertainment, food and drinks to those who were beginning to feel socially starved. “Happy Hours” segued to a similar seasonal event of food, beverage and entertainment known as “Holidaze.” With only 18 tables possible, Holidaze, nonetheless, in its timeframe of 40 days garnered an attendance of 9,000 people.

Keeping safety in mind, WAC also utilized creative reconfiguration to resume small performances in Fayetteville. Normally a “small” performance is held in a 200-seat theater. By moving them to its 1,200-seat theater, they were able to accommodate what would have been the normal-sized audience by skipping every other row and leaving four seats empty between parties.

No matter what event it was or the size of it, it served the purpose that meant the most to WAC: thanking those who had supported that Ghost Light by giving back, serving the local and regional performers and communities who had long been with them. It reassured all that the Ghost Light would simply not be allowed to shine indefinitely on empty venues. 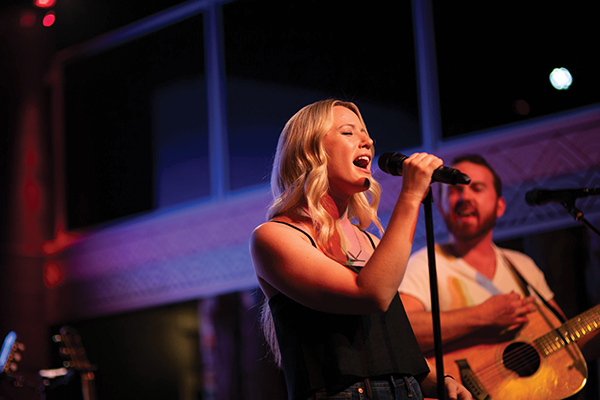 The resiliency of the WAC has been matched by a multitude of performing artists who now also face major life challenges due to the pandemic. Little Rock native Kelsey Lamb had left the state and her alma mater, Ouachita Baptist University, several years previously to seek success as a singer and songwriter. Like many independent artists, Lamb’s normal year is primarily, she says, “staying as busy as possible on the road — wherever I can get bookings. I play a lot in Florida, Georgia and Alabama.” Time home in Nashville was also spent playing its bars and breweries as well, with the spaces between bookings dedicated to writing songs, networking with other singer/songwriters, getting studio time and being virtual. 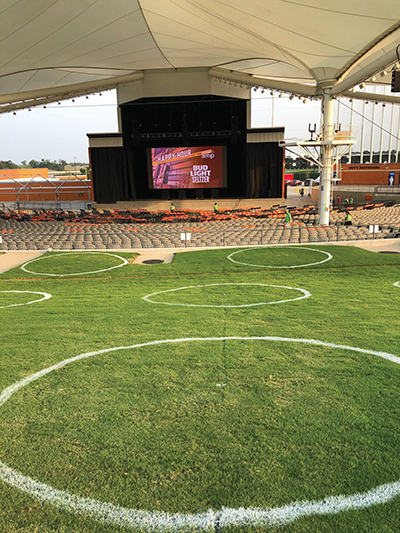 There were drawbacks, of course, mainly in the inability to get audience reaction to the work. To Lamb, the Zoom writing at first seemed “kind of like talking to a robot.” This was complicated by the fact that she doesn’t play guitar. It was tough for her, and no doubt other creative souls were also feeling that it was only a necessary substitution.

Nevertheless, her Ghost Light was determined to stay on until she could hit the stage again. Just as WAC and AMP found unexpected good in change, so did Lamb. Being grounded in Nashville freed up the time to really focus on her music as opposed to sharing the music with performing. The year saw her writing and getting into the studio much more than ever before. In fact, the sum of last year proved to be substantially greater than the total of the years previous. In turn, this ability to create more finished products allowed her to become a larger online presence by continuing to connect with existing fans and finding new ones among those who were also shut down.

“It’s really been a time of pushing the music out there,” she says. 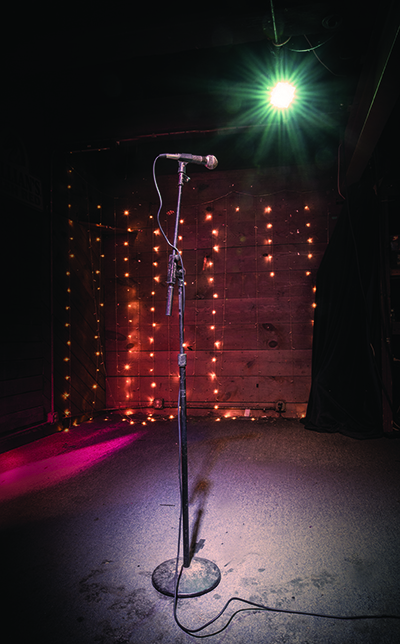 Lamb’s new singles have been coming out about every six to eight weeks, in a strategy intended to continue and maximize exposure. As she explains, “We live in a content world.” 2021 has been a continuation of that direction — Lamb has already put out the well-received song “Come Here to Talk.” “When I Remember You” is the next scheduled single to drop — this month in fact. In both of these, listeners will find that the same high-level skills that deemed some of her previous work worthy of being used in several Hallmark movies. When you check out her videos, you may even recognize her — not only her songs but her face, as she has made it into some of those Hallmark movies as an actress. Admittedly, the sales of her online music, as well as the generosity of tips from socially distanced gigs in Nashville, have been her new financial lifeline, just as they are for many other artists across the country.

The hard reality for the artists and venues is summed up by Wilson, “We were one of the first industries to shut down, and we will be one of the last ones to return to full-scale operations.” Yes, the vaccine is rolling out, but as Wilson adds, “We still have a long way to go to continue supporting these artists and art organizations because you do want them to be around when we do come back to normal.”

When everything shut down, people turned to the virtual just like the performance industry and its artists. It was and is only a substitute for live performances. The overwhelmingly positive reaction of people to just being able to attend even the most socially distanced performances is telling. The Ghost Light has perhaps served too in its illumination of one truth about the arts, which is, as Wilson says, “Just to be able to have that shared experience is really important to us as a humanity.” We will keep the Ghost Lights on in our hearts and in our communities until we can once again come together to share in our celebrations of the arts and each other.