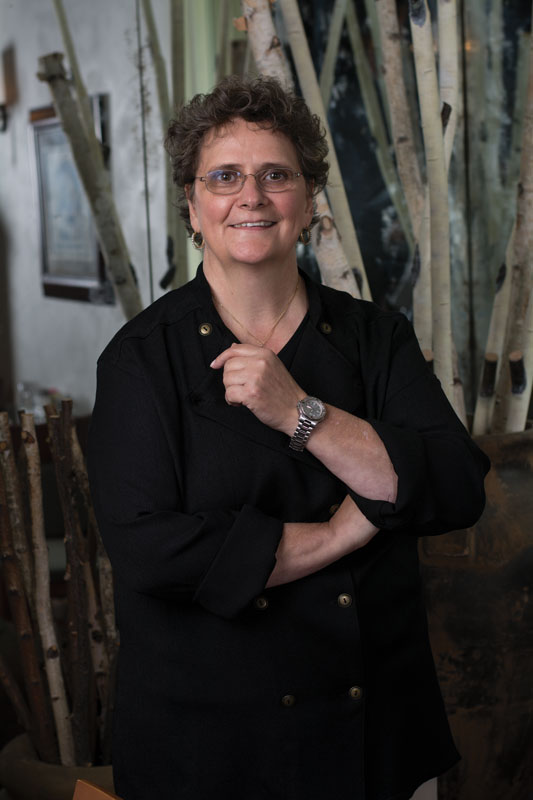 [dropcap]L[/dropcap]ook up the word “lair” in any dictionary and chances are Mary Beth Ringgold’s office will leap off the page. Tucked into a crow’s nest-type cranny in the cavernous Cajun’s Wharf, the room bursts with uniform catalogs, invoices, reams of reports, forms, vendor orders and copious miscellany. Personal photos elbow for wall space amid framed magazine articles and poster-sized artwork from ad campaigns gone by.

It’s a smorgasbord of personal and professional details, this office, a buffet of tasks and responsibilities which she metes out to staffers with both hands as she passes through the bar, around the dining room and down this hallway. One person needs an application, another, a signature and a third, to get out of the way. Ringgold’s phone never stops chirping. She’s always done it this way. 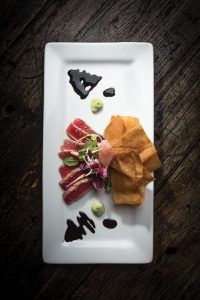 It takes an awful lot to stay on top of three restaurants these days, as Ringgold does every day, and even more to bring her perpetual motion to a halt. It’s what’s kept her one of Little Rock’s most influential restaurateurs for 20 years and her establishments – Cajun’s Wharf, Capers and Copper Grill – entrenched as local landmarks.

Those who know her can’t imagine the restaurant world without her; those who really know her understand that it was never supposed to turn out this way. Her West Virginia grandfathers and her dad were in the restaurant business and they trawled any available family member to spread out the work it took to keep the doors open.

“Growing up in it, you just knew how many hours that it required, the things that you sacrifice. My dad was never at my band stuff or never coming to games or things like that. He was always working,” Ringgold said.

“When I left to go to school, I’m in my car, I was all packed and said, ‘Guys, I can assure you of one thing. I will never be in the restaurant business.’”

Ringgold shortly went back on her oath after her father suffered a stroke and she wanted to pitch into the family’s finances. She took a gig at Cajun’s Wharf in Knoxville where she was attending the University of Tennessee. At first, she was strictly in the back office, working the books and adapting to the newfangled systems that were just starting to crop up.

“That was sort of the beginning of (point of sale) computers,” she said. “No one really knew how to work them, how to fix them. These things would just break down constantly. I went to the repair guys and said, ‘Just teach me how to do this because you guys don’t want to come out all the time.’ I gained an aptitude for it.”

Back of the house led to front of the house and Ringgold surrendered to fate. She transferred to Little Rock in 1982 and never looked back, not even to finish her degree.

“My career took over. For my age and for the time, I was making a lot of money and I was on this promotion track where I was moving up,” she said. “Now looking back on it, to have somebody managing Cajun’s who’s 22 years old? I mean that just would not happen today. Wouldn’t even contemplate it. But like my mother said, I was born 40. No one ever thought of me as being a young person.” 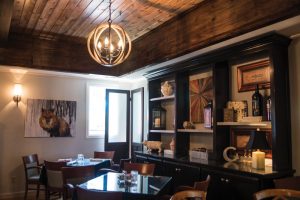 Capers got a makeover after a sprinkler pipe burst last winter. Angelfish Studios of Little Rock introduced a new color scheme and textures to update the decor.

A Texas company swooped in and bought Cajun’s Wharf in the 1990s and their approach didn’t agree with Ringgold, so she  took an opportunity with a friend’s food service company that brought American products to Russia. A 90-day consulting deal stretched into more than two years and her food horizons stretched to match, so much so that her next venture, Capers, mimicked the California wine country she’d grown to love.

“I definitely was not trying to recreate a Cajun’s Wharf in a Capers environment. Capers spoke to me in a very different way,” she said. “It was an old house that had a lot of charm and it had hardwood floors and had a fireplace. I’ve always loved wine and the whole California wine country concept. That’s kind of how we developed the Capers concept.”

Capers represented new thinking in the local restaurant market, as one of the first establishments to focus on pairing wine with from-scratch dishes made with fresh ingredients in an elegant yet casual environment. Local sourcing and farm-to-table concepts are common today, but were hard to pull off in 1997.

“I’m not sure if there’s any magic to it; it was good food and good base quality of product,” she said. “We spend a lot of time sourcing products that are chemical-free. We love to do local products when we can. That’s not so much a theme as it’s just staying with the mission of great quality of food. If we don’t screw it up with the finishing, the customer’s going to have a great product.” 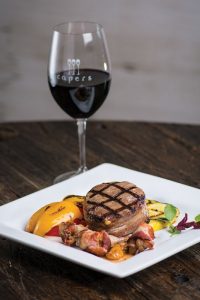 The Filet Mignon at Capers is served with their famous crawfish cream sauce.

Capers was just starting to build steam in 1999 when Ringgold and her business partners got the opportunity to purchase Cajun’s Wharf and continue to spread the gospel of fresh unadulterated ingredients and skillful preparation. In 2007, Copper Grill opened downtown, a sleek, sophisticated yet approachable restaurant as popular with business types as Little Rock’s burgeoning new urbanists.

And lest you think success has dulled her kitchen chops, Ringgold won the tenth iteration of Diamond Chef Arkansas in April, a cooking competition benefiting the University of Arkansas-Pulaski Technical College Foundation, in which she was the only woman in the field and the first woman ever to take home top honors.

Don’t call it a comeback, just the First Lady of Little Rock restaurants showing the young bucks how it’s done.

“I love foodies; I love going around a table and have somebody ask me a question about food. I have my own personal rule where I won’t spend too much time at a table because I know people didn’t come in to talk to me; they came to talk to each other. But I’ll give them as much as they want. It’s fun.”

CAPERS GETS MAKEOVER AFTER FLOOD

A broken sprinkler pipe during last winter’s cold snap took owner Mary Beth Ringgold and her crew back to the drawing board for Capers in west Little Rock. Over the span of about six weeks, crews worked to return the iconic 175-seat restaurant to its casually sophisticated glory.

“Literally we had to gut things floor-to-ceiling,” Ringgold said, noting among the collateral damage was the HVAC unit, wiring and floors. She said she took the renovation as an opportunity to reimagine the space.

“The most dramatic thing we did was we took the ceilings up a little bit in a couple places and added natural wood in the ceiling,” she said. “Every light fixture in there is new and we gutted and redid the restrooms.”

“We touched every surface in that restaurant and frankly I’m really proud of it. I think it just turned out beautiful.”

Longtimers were immediately struck by a new color scheme. Angelfish Studios of Little Rock introduced cool greys and varying wall textures to replace the gold, sage and purple palette that had been in place for years.

“Angelfish is fabulous; they are some of my favorite people to work with. They came up with some really beautiful faux finishes,” Ringgold said. “We’re calling it farmhouse chic.”

Ringgold’s fingerprints are literally on several parts of the new space, as she herself built out the back walls of restrooms, the dining room center island and the back wall behind the bar. Jon Callahan Construction of North Little Rock was the general contractor for the project.

The menu got a freshening up to go with the new dining room. Ringgold said the addition of five new entrees and five new appetizers was a “clean up” of the menu that didn’t come at the expense of crowd favorites.

“We kept the dishes that people really loved and we introduced stuff they’ll love even more,” she said.

Through ‘We Belong,’ Justina Parker Highlights Impact Women Make Around Them
October 21, 2020