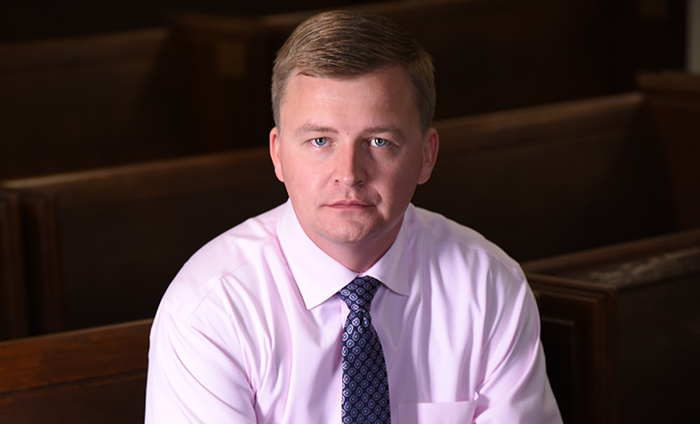 Through His Own Experience, Kyle Brewer Leads

The meeting room at the recovery center is sparse and clean and, on this day, lit by morning sunlight blown into the room on a gentle autumnal breeze. It’s not hard to imagine people gathering here to discuss their demons and share their hopes for a new beginning. Even empty, the space echoes their stories all around you.

On the far wall, a chipped whiteboard is streaked with marker in multiple handwriting. Gary, Rachel, John.

Names in faded red, purple and black stare back at you in block letters, quilted loops and shaky lines. Jeff, Maria, Billy.

It’d be good if this was a roster of the healed and saved, but it’s not. Linda, Kelsey, Chuck.

These are the names of the lost, the fatally overdosed, the ones known only to some haggard soul still lucid enough to pen their name. Antonio, Jamaal, Annie.

Kyle Brewer’s name isn’t up here, and to know his story is to wonder how that could be. Truth be told, he did his best for years to join this roster and was well on his way to being just another scrawl on a whiteboard, just another pallid corpse discovered under a bridge.

Even today, as he trains others to be a lifeline to those who need help tackling addiction, he’s just four years removed from the bowels of his existence and barely one step from tumbling back in. It’s a milieu he knows and can see clearly from here.

“I put a lot of time, energy, money, resources, my brain, everything … into addiction, into getting drugs, getting alcohol, the lifestyle. It was a full-time job,” he says. “Education, money, religion, your family — none of that stuff matters. It doesn’t matter who you are, where you come from, what you know. Addiction is addiction, and it will take us all to the exact same place.”

For Brewer, the places his addiction led him were gradated shades of darkness. No child is born wanting to use, but looking back on his childhood, it’s hard to see that he had much chance for anything else.

“Growing up, addiction was pretty prevalent,” he says. “My mom and my little sister were about the only people that didn’t at some point in time struggle with alcoholism or drug addiction of some sort.

“I was really desensitized to it because it was just normal. I mean, you don’t know something’s abnormal if it’s all around you from childhood. Uncles continuously being arrested for manufacturing methamphetamines, visiting prisons on the weekends with my mom. That was part of my growing up, and I didn’t think twice about it.”

Brewer had taken up the family habits by age 14, first with alcohol and marijuana. It was easy to get, intoxication felt good, and it wasn’t addiction, after all. It’s just what people did.

Even when his behavior caught up to him — as it did between age 16 and 18 with three trips to jail, failed drug tests, theft of property and possession collars and a stint in rehab — Brewer defied the stereotype of an addict. His boyish looks and ability to excel in his studies were effective camouflage, and when he cleaned up his friend group and set his sights on college, people who worried over past behavior thought he’d turned a corner forever. Instead, he’d merely stepped up in rank from high school stoner to the big leagues of collegiate partying. Again, all justified as normal behavior in his mind.

“That’s the culture,” he says. “In college, it is perfectly acceptable and understandable for someone to be intoxicated, especially in a fraternity. It doesn’t matter what day it is. That’s just kind of the culture. And it’s not like these people are doing anything really bad. That’s just what people do. On the weekends you go out, you party.”

Brewer would cross many lines at the University of Central Arkansas. Besides booze and pot, he’d only dabbled with pills before college. Then, he got his wisdom teeth out a couple weeks into his freshman year. Once prescribed oxycodone, the devil at his heel stuck a pitchfork through his spine.

“After the first couple weeks, I’d used all the pills, and I called back to the oral surgeon’s office to say, ‘Hey, my mouth’s hurting.’ They called me in two refills, I think it was 12 or 15 pills each time,” he recalls. “That was enough though for me to realize that, ‘Man, I like these.’ I liked the way they made me feel, and when I’d drink with them, it just intensified it.”

Brewer’s success as a substance abuser was rivaled only by his success in college. He was a great student and moved into positions of leadership in campus groups and his fraternity. His Native American heritage entitled him to a generous scholarship that meant he never lacked the funds for the party snacks of choice, which made him very popular.

“I had these pillars in my life, as I call them, that helped me keep this image up,” he says. “I had the money. School grades kept family and society happy. The social life in the fraternity made me look like a normal student, a normal person. The different leadership roles I was involved in, that not only communicates I’m doing well, but I’m excelling. All those things together were the things that helped me keep this lie going.”

The most incredible part of Brewer’s college years was he majored in addiction studies, meaning his life was being spelled out chapter and verse in his homework, yet his mind couldn’t allow him to make the connection.

“In three years of studying the science of addiction and all the things that come along with that, not the science, the books, the consequences that I witnessed growing up, none of that pertained to me,” he says. “I convinced myself that someday, somehow, I would just stop doing the things that I was doing in this lifestyle and just move on, just move forward.

“It sounds crazy today, but that paints a picture of the insanity I was living. How could you convince yourself not any of this applies to you? How in the world do you think you’re just going to stop doing this one day? There was a really dark story being written, and it was being written right in front of my face. But it was almost like it was in invisible ink, you know?”

By the time he staggered across the graduation stage, Brewer was the only one still in denial. Those around him still hoped drug use was a phase and that earning a degree would inspire him to clean up and aspire to something greater. But to Brewer, life was merely a greased trestle, and the real world bore down on him like a freight train.

His parents soon locked him out, trying to shock him straight; he got arrested, wrecked cars and burned bridges with anyone who tried to help. At the bottom, awash in a fetid morass of heroin and homelessness, his mind finally broke.

“February to July 2017 was just miserable and dark,” he says. “I was not a very good person prior to that, but what I turned into then took a much darker turn at this period. In July, I’m in a hotel room in Benton that I’d been in for about seven days. This girl paid for this room because I made her feel sorry for me. And what I’m doing in this hotel room is trying to detox off of heroin by using meth.

“Now, this is not my drug of choice, this is not something I do all the time. But I’m shooting up meth in a hotel room by myself, not eating, not sleeping. After about six, seven days of that, I am out of my mind. I think people are out to get me. I’ve been down to the desk a hundred times reporting things that I now know are not happening. I’m hallucinating, I’m calling my family, I’m saying all these things, and my mom was distraught.”

Finally, an uncle was recruited to come get him, the very uncle who did a stretch for meth manufacture and who Brewer visited in the prison family room all those years before. Uncle David had gotten himself straight and knew where the right resources were around Central Arkansas, dropping his nephew off at Nehemiah House in Little Rock.

From there, hellish detox at Baptist Hospital followed where the residue of his addiction clawed and chewed its way out of his system, knocking him out and back into lucidity as it went. His parents visited but stuck by their tough-love stance. His options narrowed to get help or die. 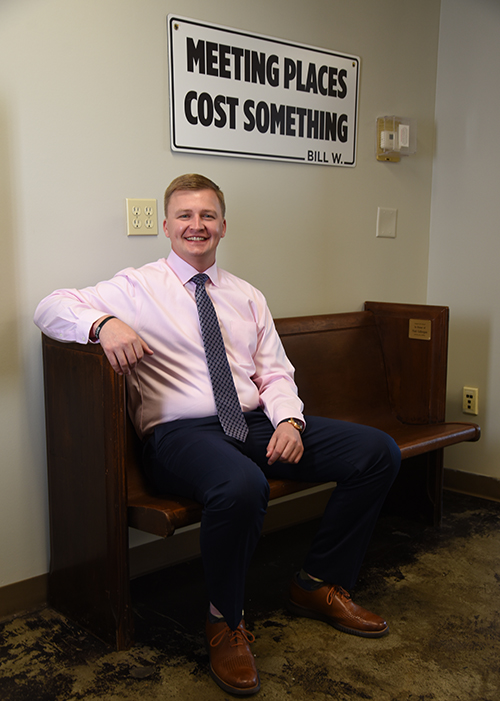 Back at Nehemiah House, he’d enter a nine-month treatment program that he’d try to leave almost daily for the first few weeks, as the monkey on his back howled and spit. But no one would come get him, and so he stayed until things started to make sense. He eventually accepted Christ, found a church and started to gain clarity on what he was and, more importantly, what he could be.

“I learned about my purpose,” he says. “At the Nehemiah House, I learned who I was and whose I was, but I also learned that I was created for a purpose — to love God and love people, all in. Going all in. I can’t keep one foot in the past and one foot in the present. It’s not going to work.”

Along the way, Brewer became trained as a peer specialist, a person equipped to help others take the first steps towards getting better. Earlier this year, that calling turned into his vocation, and he became the peer certification manager for Arkansas NAADAC-The Association for Addiction Professionals, a job he took after working for UAMS where he dealt with addicts coming into the emergency room. He still does that on a volunteer basis, offering them resources and hope. Often, he’s derided by the users, who can’t believe the clean-cut, apple-cheeked do-gooder could possibly know what addiction is like.

No, not all sheep know his voice, but that doesn’t stop him from searching for the lost ones who can.

“When I look at them, I see myself,” he says. “I’m looking at someone that everybody in the hospital doesn’t see potential in. I wouldn’t have looked at myself four years ago at Baptist Hospital when they were tackling me and sedating me and said, ‘Today’s the start of today.’ But that day was the start for me being where I’m at.

“I approach them with the mentality that I’m planting seeds. Not everybody wants help. Not everybody is going to get help that day, but I can plant a seed, and I’m going to be faithful with that responsibility. I share my story, and then I tell them, ‘Today could be your day.’ In just a few months, in just a couple years, life could look so much different than you can even imagine.”

Save a Vampire: Donate Blood This Halloween
October 28, 2022