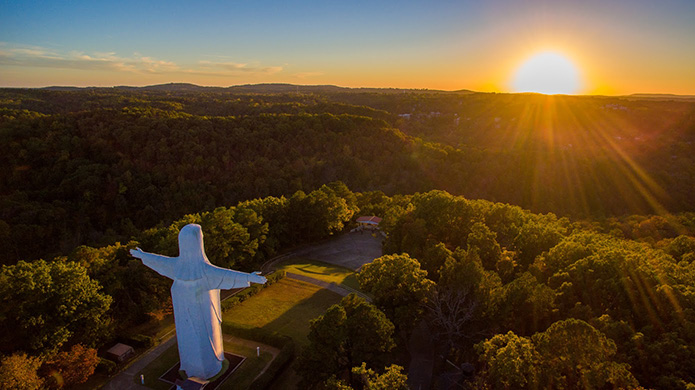 Christ of the Ozarks at Sunset – Photo Credit Jeremy Skeen

The Great Passion Play opened last weekend in Eureka Springs after Gov. Asa Hutchinson reopened outdoor venues on May 9. Allowing for groups with more than 50 people and venues to fill up to 33 percent of their capacity, the Passion Play formulated a plan for the production’s reopening, awaited approval from the Arkansas Department of Health (ADH) and opened accordingly.

“[The staff and actors] are genuinely committed to the mission of our non-profit,” Director of Operations Kent Butler told AY About You. “When I asked them if they thought our telling of the story of Jesus Christ’s last days was worth performing with face coverings and abiding by other health regulations, every single one of them raised their hands.”

Butler noted that the Passion Play has made a point to go above and beyond when it comes to ensuring health regulations are met. For example, the ADH is allowing 33 percent capacity for large venues. While the Passion Play is performed in a 4,000-person amphitheater, they are only seating 25 percent capacity. Due to this, they are able to occupy every other row and allow for 12 feet between each group of audience members.

In addition, the Passion Play is making a point to screen and protect all of their actors and stage crew members before each performance. Conducting infrared temperature testing, requiring backstage social distancing and onstage face coverings for actors with extensive speaking parts, the Passion Play hopes that these precautions will be reassuring to their audience.

“It’s a massive undertaking to be open in this stage,” Butler said. “Thankfully, we’ve had long-time supporters of the Passion Play volunteer to help with things such as sanitizing the entire theater before, during and after the performance. We do all of this because our goal is to make people feel safe.”

Butler also mentioned the Passion Play’s commitment to laundering each costume after every performance – increasing their wash load from eight loads per night to more than 20.

“We are going to continue to follow the directions of the ADH,” Butler said. “Of course, we hope some things may change in the future, such as the face coverings. However, we are dedicated to maintaining this level of cleanliness. The world has entered a new normal and should expect this protection of cleanliness even when COVID-19 passes.”

The Passion Play will remain open for performances until the end of October, offering weekend productions, as well as Tuesday shows in June and adding an additional Thursday show in July.

READ MORE: 100 Things to Do in The Natural State