The Heart of the River Valley

After years of traveling from one corner of Arkansas to the next and giving this matter considerable thought, I’ve concluded that Russellville is arguably the best-situated city in the state. “Russellville?” You ask. Here’s why.

It’s conveniently located in west-central Arkansas on Interstate 40, almost exactly halfway between Little Rock and Fort Smith. U.S. Highway 64 runs east-west through the heart of the town, and Arkansas Highway 7, considered by many to be the state’s most scenic route, also bisects the city, connecting Russellville with Harrison to the north and Hot Springs to the south. 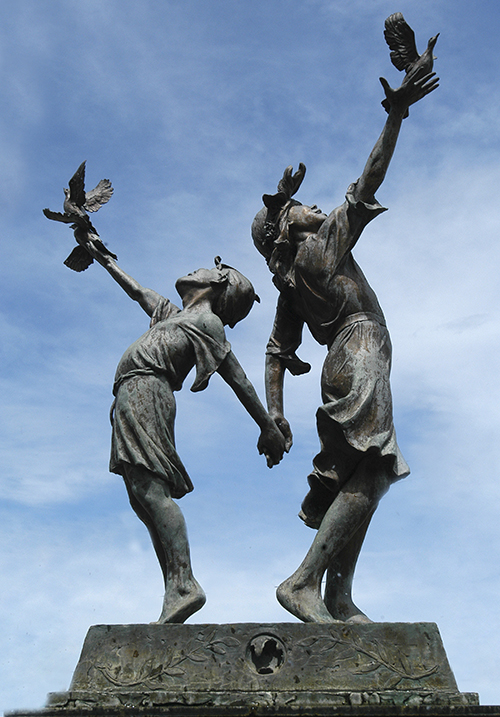 In many respects, Russellville serves as an ideal gateway to the Ozarks, offering easy access to such places as Haw Creek Falls, Pedestal Rocks, Ozark Highlands Trail, Long Pool Campground, Big Piney Creek — all within the Ozark National Forest, which, by the way, is headquartered in Russellville. And, of course, there’s the Buffalo National River. Likewise, the town serves as a prime entryway for the Ouachitas, with Nimrod Lake, Hot Springs National Park and the Ouachita National Forest to the south. Lake Dardanelle State Park is virtually within Russellville’s city limits, and Petit Jean and Mount Nebo State Parks are just minutes away, as is the Holla Bend National Wildlife Refuge. The Arkansas River and Lake Dardanelle more or less serve as the city’s southern and western boundaries. Russellville can also claim the Corps of Engineers Arkansas River Visitors Center overlooking Dardanelle Lock & Dam and the Bona Dea (Latin for “Good Goddess”) trail complex with its 7.6 miles of pathways for walkers and bikers.

But there’s more — so much more — to Russellville than its geographical setting. First though, a bit of background on this Pope County seat of nearly 28,000 residents. The Osage and Cherokee lived in the area before white settlers arrived around 1830. Among the early pioneers was Dr. Thomas Russell who moved from Illinois in 1835, building a home in what’s now downtown, and the community eventually became known as Russellville. Officially incorporated in 1870, Russellville marks its 150th birthday this year (but the sesquicentennial celebration will be postponed until next year, another victim of COVID-19).

The Little Rock and Fort Smith Railroad began running through the town in 1873, spurring development. That growth resulted in the county seat being relocated from Dover to Russellville in 1887 following a spirited election. Coal mining contributed to the local economy through the early part of the 20th century, as did raising cotton, but both activities gradually went by the wayside. The Second District Agricultural School, one of four such institutions authorized across the state, was established in Russellville in 1910. Renamed Arkansas Polytechnic College in 1925, it became Arkansas Tech University (ATU) in 1976 and is now the state’s third-largest institution of higher education.

The city’s growth has also included the establishment of several notable eateries that remain in business decades later. The Old South Restaurant (1330 E. Main St.), Russellville’s oldest operating restaurant, opened in 1947. Back in the day, Elvis Presley identified it as one of his favorites in Arkansas, and it’s also hosted former presidents Bill Clinton and Jimmy Carter over the years. Open six days a week (closed Sundays) from 7 a.m. until 9 p.m., the Old South has generated a loyal following for its signature dishes of chicken-fried steak and possum pie. 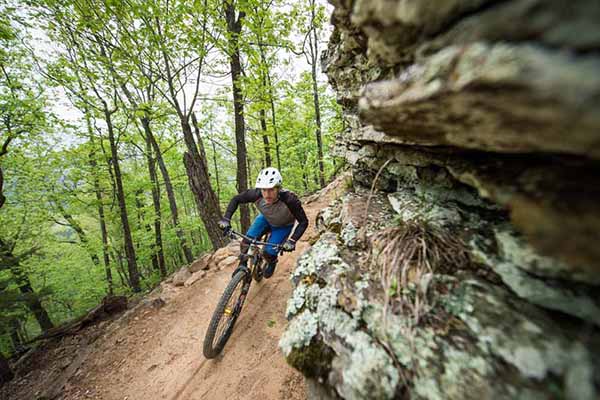 Twenty years later Bob Feltner opened Feltner’s Whatta-Burger (1410 N. Arkansas Av.) a block or two northeast of the ATU campus. Given Clinton’s former appetite for tasty burgers, it’s no surprise that he’s also been spotted dining at this establishment. In addition to lots of burger options, Feltner’s also offers such delicacies as chili-cheese fries and enormous shakes. On my last visit, I noticed this sign hanging above the dozen or so ATU students furiously working behind the counter: “We guarantee fast service no matter how long it takes.” Operating every day of the week, Feltner’s opens at 10:30 a.m. and closes at 9 p.m., Monday through Thursday, and at 10 p.m. on weekends.

Then in 1984, Stoby’s came into business following a successful venture in Conway. It’s known for “The Stoby,” a sandwich that comes in more than 3,500 permutations given the meat, cheese, bread and condiment options, and for its cheese dip, a tasty side dish that Russellville patrons consume at the rate of 3,000 gallons a year. Located next to the main line of the Union Pacific Railroad at 405 W. Pkwy., Stoby’s features a railroad theme. An elevated model train runs through the restaurant, and the parlor car – allegedly used by Al Capone on his trips between Memphis and Hot Springs – serves as one of the dining rooms. A fine selection of homemade pies (based on recipes from Florence Smith, owner of the original Mrs. Smith’s Pie Shop in Conway) will tempt even the most diet-conscious visitor. Open from 6 a.m. to 9 p.m., Stoby’s operates six days a week (closed Sundays). 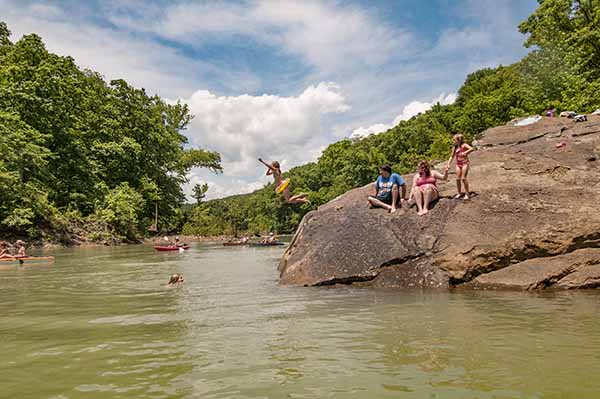 Speaking of sweets, Freddo’s Frozen Treats is worth a stop. Located a couple of blocks north of Stoby’s at 407 N. Arkansas Av., it features a mouthwatering assortment of ice cream, frozen yogurt and gelato (try the “Decadent Chocolate” gelato). Closed on Mondays, Freddo’s is open from noon until 8 p.m., Tuesday through Thursday and on Sunday, and from noon until 9 p.m. on Friday and Saturday.

I’m told Freddo’s is popular with a group known as Russellville’s Calendar Girls. But don’t jump to any sexist conclusions. It’s a collection of about a dozen individuals representing key art, recreation, civic, education and other organizations around the community. Collectively, they produce 90 percent of the concerts, festivals and other special activities staged in the city, and they get together every month or two to coordinate a community-side schedule of events. They all happen to be women, thus the name “Calendar Girls.” 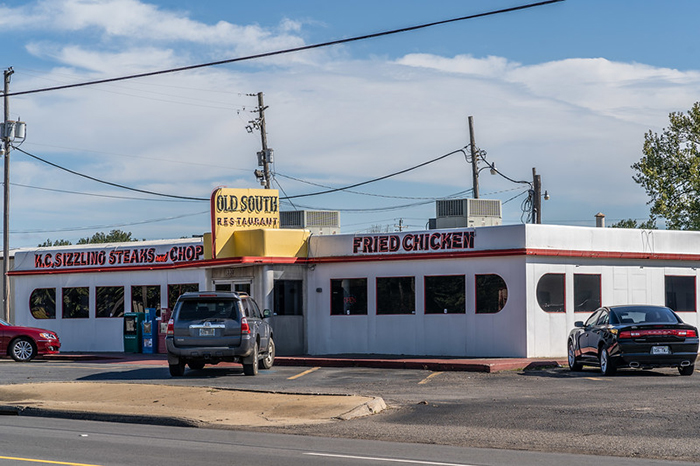 “By working together,” says Christie Graham, executive director of Russellville’s Tourism and Visitors Center and a founding member of the Calendar Girls, “we’re able to spread out our events, avoid conflicts and make the most of their economic impact. We have each other’s backs.”

Graham, a Russellville native and ATU graduate, notes that the community is mostly an outdoor tourism destination, mentioning the new mountain bike trails on nearby Mount Nebo, the legions of motorcyclists fond of Scenic 7 and the canoeists and kayakers flocking to Big Piney Creek every spring. “And,” she adds, “the 30 fishing tournaments held every year at Lake Dardanelle State Park are a big draw for the town.”

Sarah Keating, another of the Calendar Girls, is the superintendent at Lake Dardanelle State Park and is proud of the park’s supporting role in the tournament business. Her staff even includes a park aquarist who, in addition to maintaining the 8,000-gallon aquarium in the visitor center, makes sure that every largemouth bass caught in the tournaments is released in the lake to be caught again. 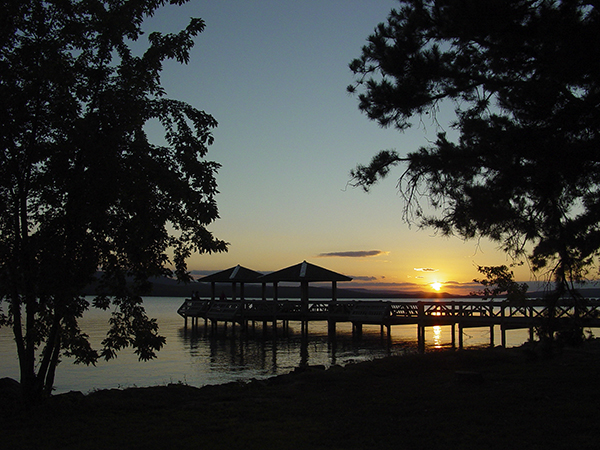 Yet the park is much more than a popular destination for anglers. “It’s a perfect combination of nature and history,” Keating says. “The fact that we’re a Trail of Tears site with cool Native American history often surprises our first-time visitors.” Workshops on a variety of topics — to include basket weaving, wild edibles and Dutch-oven cooking — have proven popular with visitors. Same for the kayak tours during the spring and summer months and the eagle tours (October – February) on the park’s 20-passenger party barge. Bald eagles now nest on Lake Dardanelle, and it’s not uncommon to see them or snow geese, pelicans or even the occasional osprey.

Paul Harvel, president and CEO of the Russellville Area Chamber of Commerce, says that Lake Dardanelle State Park and the other surrounding amenities contribute to “an absolutely phenomenal quality of life” in the community. Harvel should know a thing or two about this, having been in the chamber business some 52 years and serving half a dozen economic development organizations over the course of his career. Harvel explains that there are about 20,000 workers in Russellville’s industrial district (many of them in high-tech jobs), and more than a few make a point of hitting the bike trails or going fishing after work. He also notes that ATU  “is the single most important factor in the city,” citing its commitment to workforce development. 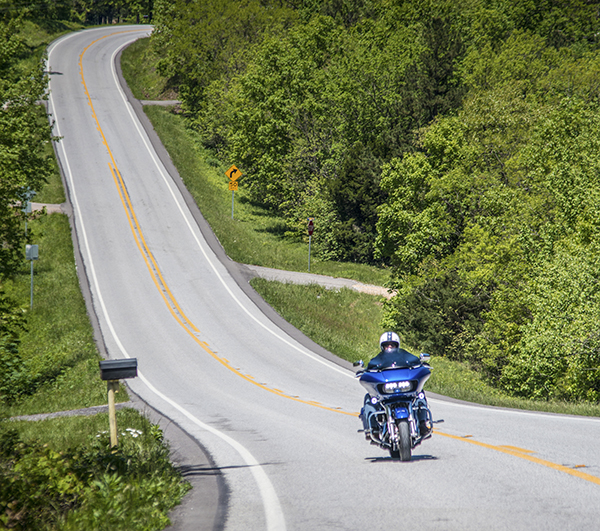 Dr. Robin Bowen, ATU’s president, couldn’t agree more. Since taking this job in 2014 (she was the first woman selected to be president of a public four-year university in the state), Bowen has emphasized the importance of grooming her graduates to thrive in the ever-changing 21st century. The school now offers a program preparing students for careers in such fields as the video game and entertainment industries, animation, simulation programming, web design and interactive visualization construction. Another new degree option is the online MBA program with concentrations in digital marketing and business data analytics. ATU has been a leader for some time in the field of emergency management and now offers a master’s degree in emergency management and homeland security. A year ago, the school opened its new state-of-the-art lab for the study of cybersecurity.

The university’s 12,000 students represent all 75 Arkansas counties, 40 states and 45 countries across the globe. The school supports nearly 6,000 jobs in the region and contributes more than $330 million annually to the Arkansas River Valley economy, according to a recent study. But the school’s reach extends across the entire state. “The futures of Arkansas families are enhanced by what happens at ATU,” Bowen says. “If Arkansas is to move forward, our graduates must be more than good workers. They must be good citizens who are invested in making their community, their state, their nation and their world a better place for all.” 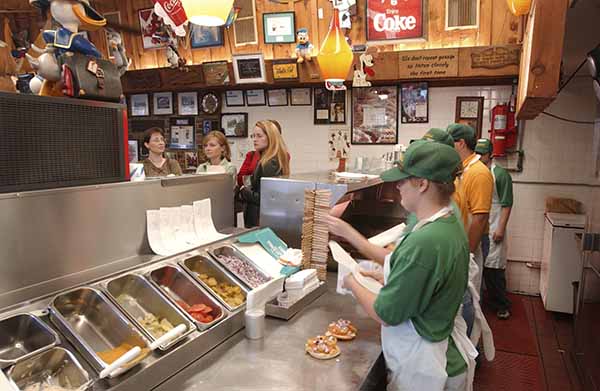 Russellville Mayor Richard Harris is another big fan of ATU. “Most people don’t realize the facilities we have here at Arkansas Tech,” he says, “and the degrees that the school offers.” Harris, who’s been mayor about 18 months now, has had an interesting initiation to the job. “Last year, we had the big flood on the Arkansas River, and then came the pandemic and the economic downturn. And now, there’s the casino issue,” he says (referring to the public controversy regarding a proposed multimillion-dollar gambling development for Pope County). 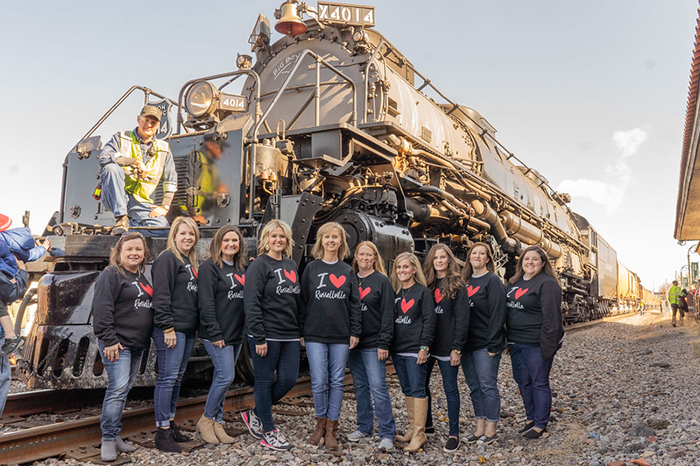 The Calendar Girls. (City of Russellville)

Harris, who’s an engineer by training, says, “I’m a facts kind of guy, assessing situations and then pursuing the best option.” He’s enthusiastic about improvements scheduled for downtown, a project that will install new water and sewer lines, bury overhead power lines and bring in landscaping and enhanced sidewalks and crosswalks. Construction will begin within a few months and should wrap up by the end of 2022.

Mayor Harris also shared some facts about Arkansas Nuclear One, that huge electrical generating station that Entergy operates on the west side of town — and whose cooling tower is readily visible under a plume of steam to those traveling on I-40. He worked there for over 30 years before retiring. The two units together require about 1,000 full-time employees and generate 1,700 megawatts of electricity — enough electricity to power approximately 1.1 million homes. 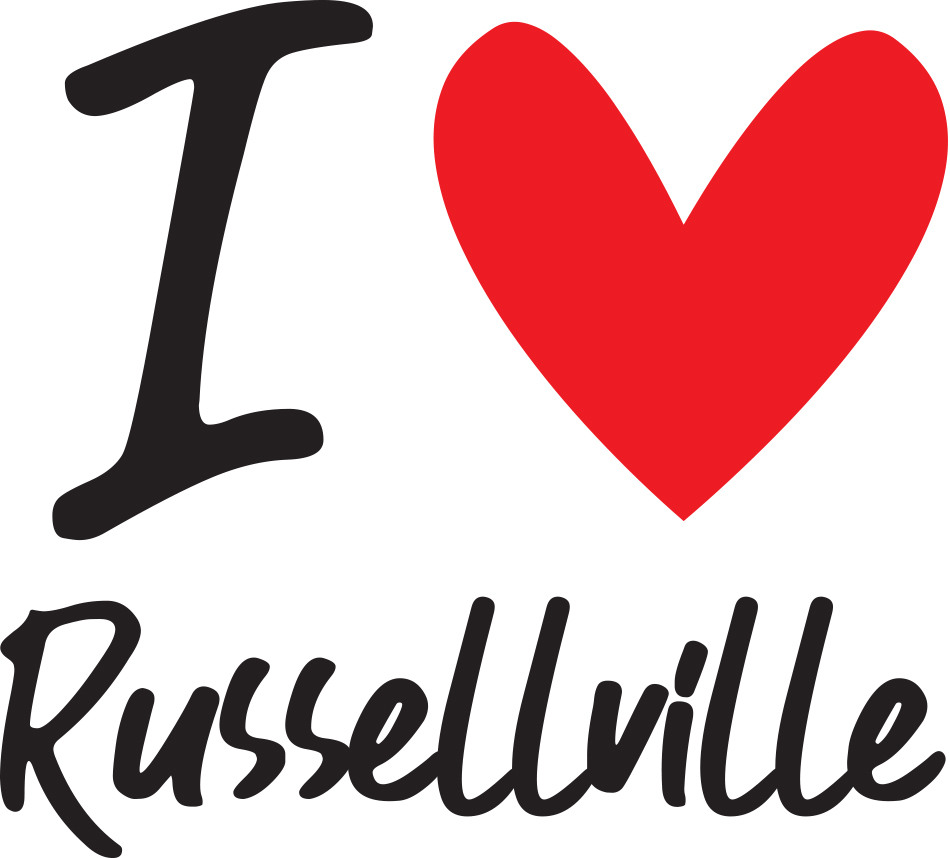 “We have a lot to offer in Russellville,” the mayor says. “Come see us.”