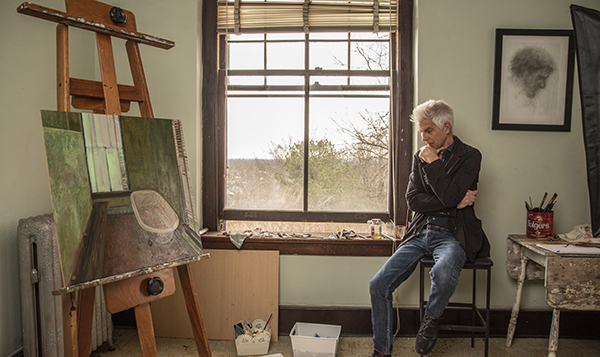 The elderly couple shuffling down the street pause to get their bearings, the light falling across their faces just so. From inside his car, Kevin Kresse glances casually at the pedestrians, and his heart leaps into his throat.

At last, he thinks.

Kresse had been beating his head against an artistic wall for some time, trying without success to get his depiction of the Good Samaritan, to be displayed at Baptist Hospital in Little Rock, just right. Time was ticking for his first piece of public art and with it his frustration as the expression of the benevolent Biblical do-gooder eluded him. And now, the perfect face was shuffling right alongside him.

“I kind of had in mind this type of a kindly but interesting-looking face for the person helping the other one,” Kresse remembers. “I was driving down Kavanaugh … and I remember my twins were toddlers in their car seats. I saw this older couple walking down the street, and I went, ‘Oh my God! There he is! That’s him.’ 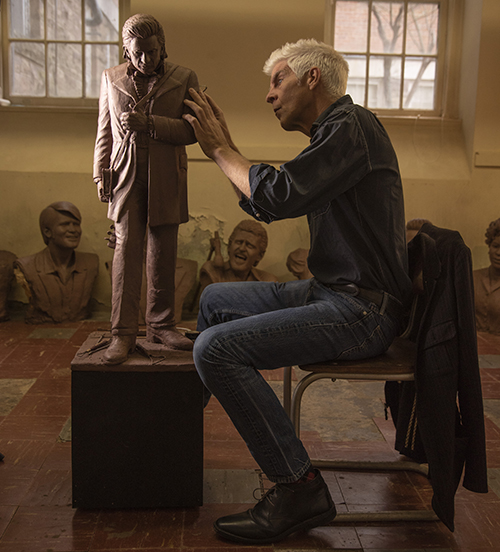 Kresse’s attention is focused on every detail of his Johnny Cash statue.

“I go turning around the block and get up ahead of them and pull over. And of course, I sound like a complete crazy person getting out and going, ‘OK, so here’s the deal …’ I explained everything, and he looked at me, and he goes, ‘I have a heart condition.’ I said, ‘Well, this shouldn’t be that strenuous.’”

Kresse, as is his wont, punctuates the story with a laugh smooth as polished marble. In the years since that first public piece, he has become one of the most well-known artists in Little Rock, if not Arkansas — to say nothing of the rest of the country, too — with paintings and sculptures brightening public and private spaces from coast to coast. 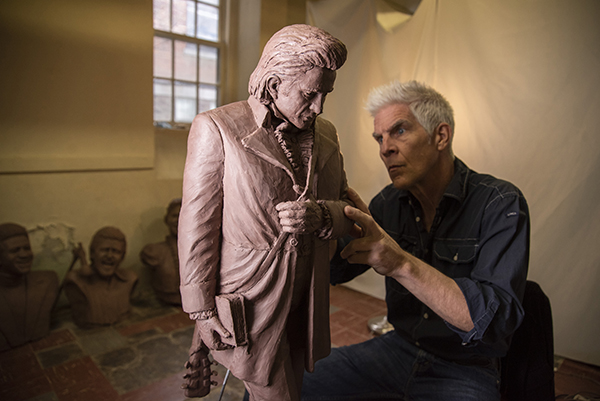 Experience has sharpened his eye and steadied his hands to be sure, as only time can do. But the magic still lies in such happy accidents, the serendipitous aligning of time and place and person that ultimately breathes life into his work. Creation is nothing without that spark, and it can come from some pretty unexpected places. That part of the journey, Kresse says, is and always has been much of the fun.

“I don’t think I had a clear idea of the kind of artist I would be,” he says. “As a kid, my big heroes in grade school visually were Michelangelo and da Vinci. I loved Michelangelo; he painted and sculpted. I don’t think I ever determined to become a sculptor; I was painting because that was more accessible to me when I first started.

“My first large bronze was sort of a happenstance thing, and because of that, it led to my first public piece. Then, being responsible for a wife and eventually three kids, quite frankly, the commissions of sculpture helped me budget out what was going on to keep the boat afloat for the family, as opposed to waiting to see if paintings in the gallery would sell.

“But to me, it’s all fine because you’re still getting into that core part of you, reconnecting with your true self. When I’m creating something, it doesn’t matter if I’m painting or if I’m sculpting; I’m still shaking hands with myself. That’s where the joy of the art comes from.” 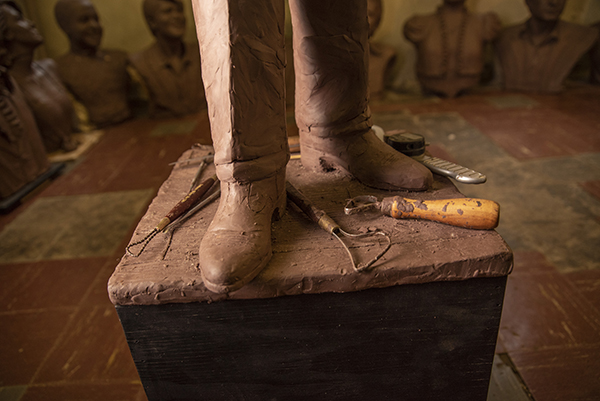 Kevin Kresse has always been surrounded by faces. The 10th of 11 kids, the North Little Rock native worked his way through parochial school, Catholic High and UA-Little Rock where he majored in art. Initially, he divided his skills between his passion and a day job in advertising, a reliable groove he was resigned to stay in had the most influential voice in his life not said otherwise.

“When we were pregnant with the twins, I was maybe eight or nine years into working as an artist doing gallery shows and things,” he says. “I had started to build a name and was selling OK from the galleries and stuff, primarily paintings. But knowing that I had kids coming, I was thinking to myself that I need to go get a real job and be responsible as a father.

“My wife, Bridget, was the one who said, ‘That’s not you. We’ll be OK.’ And I’ve got to say, I’ve got other friends that their partners couldn’t live with the instability of erratic income, and I’ve seen other relationships fall apart. But she really props me up when I’m in darker areas.”

Another inspiration was the Little Rock band The Gunbunnies, with whom Kresse — who is as enamored with, if not as accomplished in, music as he is visual arts — lived for a spell. During that time, he watched band member Chris Maxwell daily hone his craft and hustle the band to club owners and record execs alike.

“You could hear him in the morning working through scales; you could hear him calling the record company. He was really getting after it, and it was nice being around someone so driven,” Kresse says. “I was thinking, well, they were really doing what they love, and they’re paying their share of the rent. Maybe I could do it, too.”

True talent is always discovered; it’s just a matter of when. Whatever a smaller market like Little Rock may have lacked in notoriety it more than made up for in familiarity. Thus did Kresse’s reputation build, one project at a time. In the what-have-you-done-lately world of the independent artist, each piece put him in the running for another, then two, three or five more, begetting more projects.

Kresse stood out from the field for his unique talent to create sculptures of anonymous as well as well-known people, capturing the subject’s individual aura in ways that are hauntingly alive.

Five years ago, a commissioned sculpture of musician Levon Helm coalesced three of his most foundational elements — art, music and the Natural State — and set him on a path to create a series of busts of other noteworthy Arkansas figures. To date, Glen Campbell, Al Green, Sister Rosetta Tharp, Daisy Bates and Louis Jordan crowd for space in his Stifft Station living room, next to Helm.

Johnny Cash holds a special place in this lineup, represented in three pieces. A bust of the lean country barnstormer over here, another of a fleshier, older Cash in a corner near the front door. Both are remarkable in the external conveyance of dark and light that hints at the twin bobcats of sin and salvation wrestling inside Cash his entire life.

But the one that stops the visitor in their tracks is Kresse’s latest, a full-body version of Cash from which one literally cannot take one’s eyes. Guitar slung over his back, Bible in his chiseled hand, head dipped, the piece poses more questions than answers. Is Cash pondering his good fortune or assessing his life’s wreckage? Praying in thanksgiving or silently begging for mercy? Just like with the man himself, the answer changes with the angle.

The remarkable piece is soon to be cast as an oversized bronze statue to be displayed in the U.S. Capitol’s National Statuary Hall in Washington, D.C. Last year, Kresse won the honor for his Cash, selected over artists’ designs from across the country, to stand next to Daisy Bates representing Arkansas. The finished work is expected to be unveiled sometime later this year.

For the Arkansas kid, it’s hard not to rank the accomplishment at the very top of an already-remarkable career, especially with what it took out of him to get there. 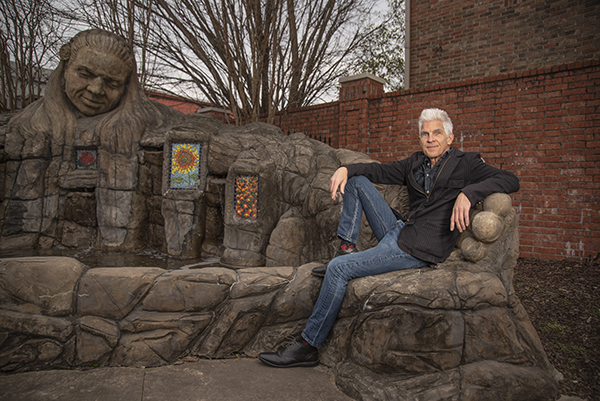 “When I was working through these different poses and trying to get to ‘the One,’ I was thinking it would resolve itself, and I would know when I had arrived,” he says. “But along the way, there would be times where I would go, ‘Oh my God, come on! What am I missing?’ I talked with Michelangelo; I talked with Bernini. And I did a lot of talking with Johnny along the way.”

As he works out the details on the Cash project, Kresse is more in demand than ever. He’s recently dedicated a statue of Natalie Wood on Catalina Island in California and is working on another piece for a corporate client in Northwest Arkansas. More projects wait in the wings, patiently anticipating their time under the hands of a master.

Asked if he’s got a white whale, a subject he’s tried and failed to adequately capture, he sheepishly confesses The Beatles as being just outside his artistic reach. But who knows, he chuckles; walking down the street, shopping a farmer’s market or sitting on a park bench, he may find them yet one day.

“I see faces all the time,” he says. “You can look at certain people and either there’s a light behind their eyes or there’s just something about them that draws you to them. It can be just the initial outer features that kind of catch your eye. If it stops right there, then I’m not interested.

“But if there is that extra-special something that’s so intangible and hard to put words to, then for sure, I’m so interested. I’m not content just giving a likeness. It’s got to go deeper.”